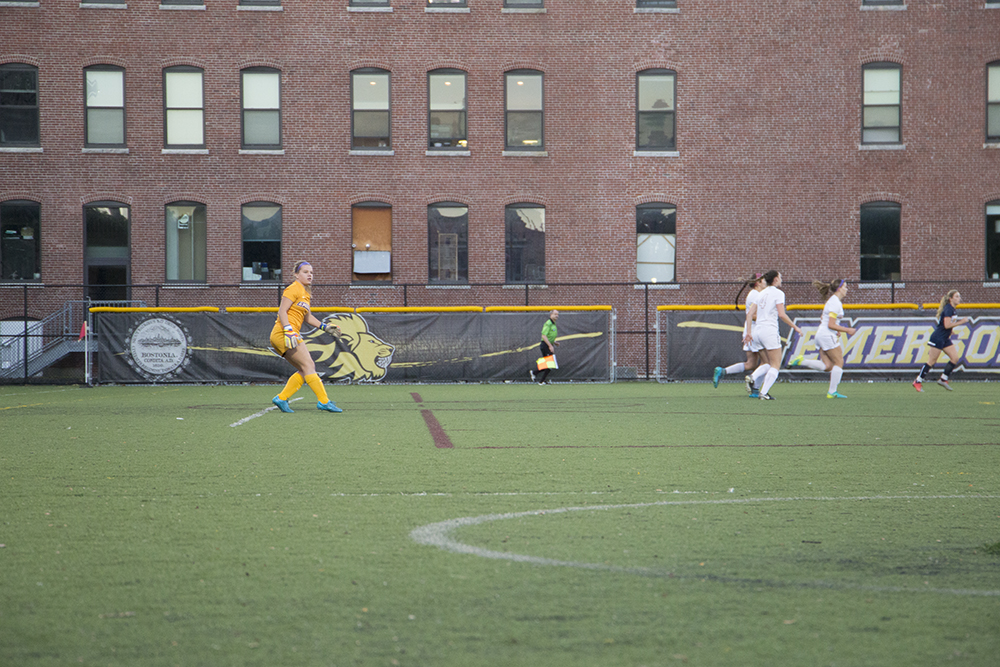 After qualifying for the NEWMAC playoffs last year, Emerson’s women’s soccer team had high expectations for this year, but injuries to key players held them back.

The Lions finished ninth in the NEWMAC this year, posting a 3-11-2 record.

“I thought that we had a good group of players that I thought were going to be very successful,” Suvak said. “We suffered an injury to a first team All-Conference kid in Paige Haley, and we also lost what I would consider our starting goalkeeper [Gartelman] in the same week.”

A tough round of opponents from California and the NESCAC kicked off the season with an 0-4 start. Emerson recovered in time for conference games, winning its first three NEWMAC matches for the first time in program history.

From there, Haley’s injury and inconsistent goalie play led the team to lose its final seven games.

“We looked like we were on the right path to be successful; we were 3-0 in the NEWMAC,” Suvak said. “I didn’t know at the time that the injuries were going to be as devastating as they were, but it was a pretty hard hit.”

Haley led the squad in goals at the time of her injury, and her absence hurt the Lions’ offense, which relied on her and junior forward Jess Frost. The end of the season saw Emerson take the second fewest amount of shots and score the fifth fewest goals in the conference.

“I’ve never seen two players work better together in my soccer career than [Haley and Frost],” senior defender Laura McGuire said. “They create goals for each other, they feed off of each other, and they assist each other. It’s really tough to try and pick up such a huge part that she was of the team and put it on other players.”

Frost said she was forced to adapt to the situation by receiving the ball more.

“Paige and I gave each other the ball a lot and so with her gone, I was no longer receiving as many passes,” Frost said. “I had to change my style by coming back deeper into the field to try and win the ball, and in order to do that I had to come more central and play in Paige’s area, but not play like Paige did because I can’t play like Paige.”

Unlike Haley, Gartelman’s injury did not cause her to miss the rest of the season, but she did miss four conference games. But Emerson’s goalkeeper issues ran deeper than Gartelman’s absences.

Throughout the season, the Lions struggled to find a proper replacement for Melanie Escobar, who was named NEWMAC Defensive Player of the Week twice and pitched four shutouts as their goalie last year.

Within the conference, Emerson allowed the second most goals. While Gartelman was out, Suvak turned to freshman Mary Elizabeth Allen.

“[Allen] stepped in on occasion to help us out, and she helped us win a big match against Springfield early in the season,” Suvak said. “I think just between [Allen] and [Gartelman] they did the best they could as athletes for our team.”

With the conclusion of the 2017 campaign, Suvak has shifted his focus to next year. He said freshmen Sophia Detweiler, Amanda Benavente, Modesty Sanchez, and Madeline Leto impressed him this year and could make an impact in the future. Suvak said the Lions are also addressing needs through recruiting.

“I’m very happy with those players in particular,” Suvak said. “Right now we have many verbal commits for next year including attackers and goalkeepers, so we feel like we have solved a problem that we saw this year.”

The program is expected to return most of its players with only three graduating in the spring. As one of the seniors leaving, McGuire said the Lions are in a good spot.

“All the pieces are there and this team has the right group of players,” McGuire said. “I think they can go really far next year and I’m really excited to come back and see what they do.”

Suvak said he feels confident they will have a high quality unit next year.

“I’ve always thought that, even going into this season, next year is going to be one of our best teams that we’ve put on the field,” Suvak said.