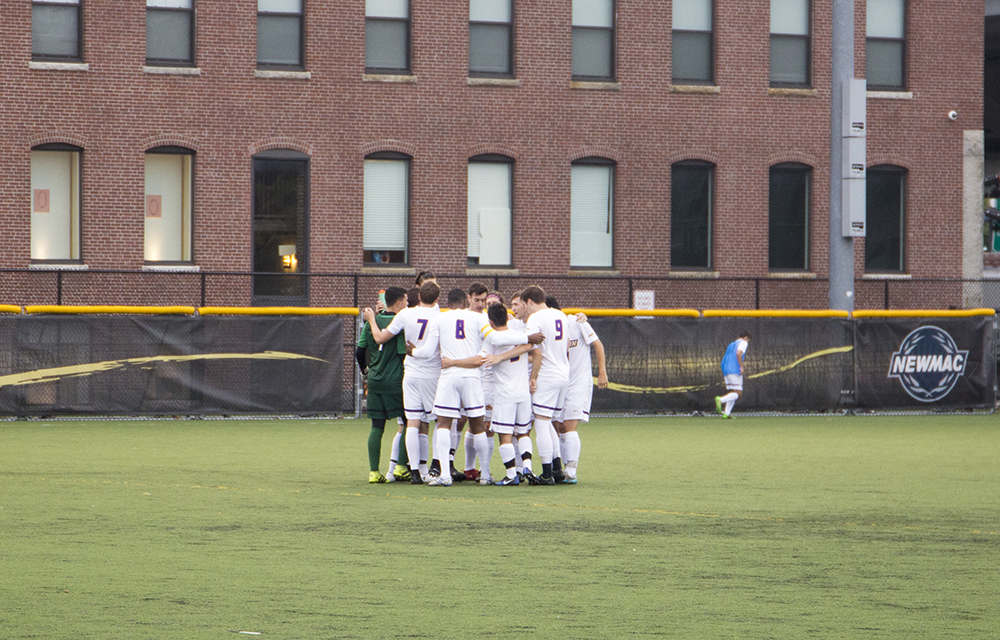 Men’s soccer head coach Bryan Harkin set a lofty goal to make the NEWMAC playoffs with his team this season, but the Lions finished far from it.

“We’ve had some games where we defended well for half [the] game [or] sixty minutes,” Harkin said. “We need to put better defensive efforts in for a full game, and that comes from everyone on the field.”

While defense was a problem for the Lions—they averaged 2.29 goals against per game—the team also struggled with its offense. They only scored twice in the NEWMAC, and Harkin said they were too reliant on their sophomore leading scorer Gavin Faucette.

“A large part of our attack came through him,” Harkin said. “We need to lighten the load on him and add some guys that score and create goals and also guys on the current roster need to step up and get a few extra goals.”

Faucette led the team with eight goals and 16 points this season. He finished first in shots in the NEWMAC with 68.

The team concluded its season on a high note by defeating MIT 1-0 in its season finale on Oct. 28th to claim their only conference win. Senior Franco Araujo O’Neill scored the winning goal for the Lions, and fellow senior Niko Emack-Bazelais assisted. Senior goalkeeper Lucas Fischer made six saves and earned a shutout in his final game.

“It was absolutely phenomenal, you could not ask or even think of a better ending really,” Fischer said. “It was a really special moment.”

Harkin was also glad that the team earned its first conference win, but he said he still expects more.

“A win can paper over a lot of cracks and we have to be, as a coaching staff, very realistic,” Harkin said. “A win at the end of the year is good, but it’s not where we want to be and we want to be better than that.”

Harkin’s ambition has players like Fischer excited for the future, even though Fischer is graduating.

“The professionalism that Coach Harkin has brought into the program is a huge plus,” Fischer said. “That’s going to be a turning point for this team.”

“The freshman were phenomenal teammates and worked hard, and they were stellar in the moments where they were able to show themselves,” Fischer said. “I think they’re going to pick up big leadership positions next year.”

Two freshmen, James Suvak and John Manocchia, played in all of the Lions’ games, while freshman goalkeeper David Kemp started six games and had a record of 3-2-1. Four of Kemp’s starts came when Fischer was out with a concussion, and he went 2-2 during that stretch. Kemp said he believes the squad will become a playoff contender while he is at Emerson.

“That’s the goal and I believe it is a very achievable goal,” Kemp said. “I can’t wait to get the recruits in, and we’re going to work hard over the spring. I can’t imagine what it will be like when coach gets to stamp his personality on the team more. We’re all just really excited.”

The Lions will graduate five seniors this year: Warren Backman, Marco Correia, Fischer, Araujo, and Emack-Bazelais. They all served as key figures on Harkin’s squad. While Harkin said losing these players is hard, it is part of life as a college coach.

“That’s college sports, it’s always a revolving door,” Harkin said. “Guys come in and have great careers and you have to replace them, so it’s my job to get out there and work hard. We’re going to recruit as much as possible and [bring] some dudes in that can hopefully help us.”