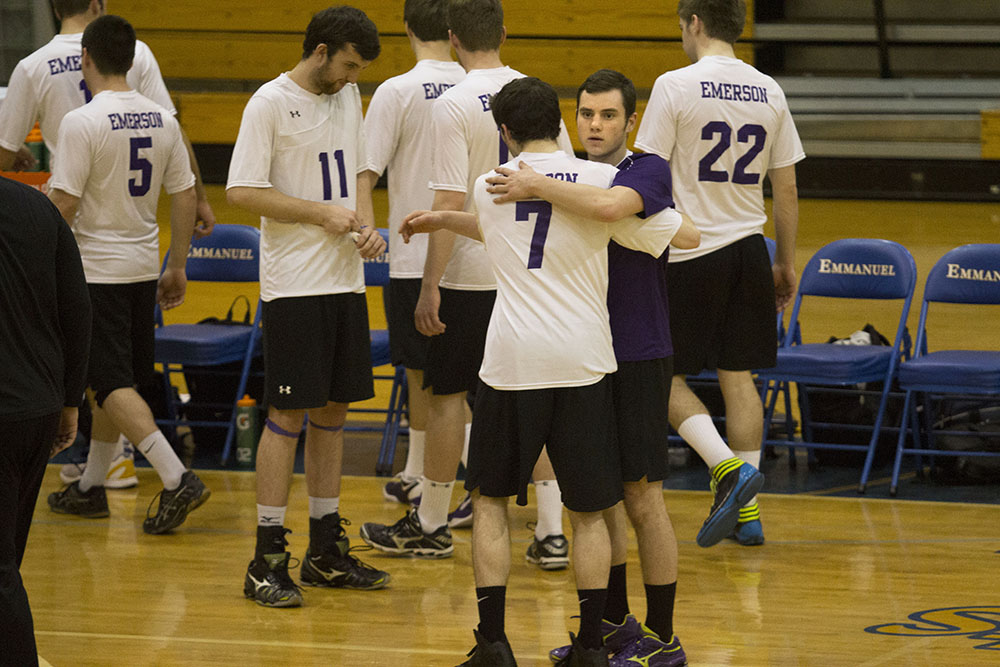 In a packed gym at Emmanuel College, nearly 200 spectators looked on as the Saints swept Emerson College 3-0 in the semifinals for the Great Northeast Athletic Conference men’s volleyball playoffs, the first time the team reached the tournament since 2011.

Emmanuel dominated the offensive side of the court, as the Lions were outscored in the game 44-75 in three sets.

Alex Frapech, a freshman on the team, said Emerson did not anticipate such a high offensive energy from Emmanuel, and as a result fell into an early insurmountable deficit in each set.

“We came out on our heels, and we were not expecting them to come out 100 percent,” said the communication studies major. “So I think we definitely were not ready for the first game, and once they started swinging pretty well, we kind of dug ourselves a hole we couldn’t dig out of once we were that deep.”

Head coach Ben Read said Emmanuel was playing at a higher level, and despite the team’s best efforts, it could not overcome a size and strength gap.

“[The Saints] are clicking at a different level right now,” Read said. “They are a very aggressive team serving wise and they are a big team. The first time we played them, we played some pretty good ball, and I hope we gave them a good tune-up for the next round.”

The Lions reached the second round of the postseason after securing the program’s first playoff victory with a 3-2 win against Wentworth Institute of Technology earlier this month.

Stephen Carr, a freshman player for the Lions, said that while the team played adequately, its performance was not enough to overcome a tough opponent.

“[Emmanuel] is a team that we can beat, but we need to be playing out of our minds,” said Carr, a visual and media arts major. “And that game was, by any stretch of the imagination, not the best game we can play. We gave it a good try, but it would have taken more.”

Emerson finished the season with a 12-17 record, a program best.

Frapech said the season has provided a substantial confidence boost for a team that welcomed six new freshman to its lineup this year.

“To make it this deep into the playoffs, we did pretty well,” Frapech said. “We will definitely work in the offseason, and because we’re a young team, we will definitely improve and look to do better next year.”

Connor Burton, a sophomore on the team, said the players exceeded their own expectations for the season, and are looking to carry that momentum into next year.

“Our goal was to make the playoffs, and not only did we make the playoffs, but we won in the first round despite our own expectations,” said Burton, a journalism major. “So I think that we really showed that in the years coming, this is going to be a really strong program, and we’re ready to go.”