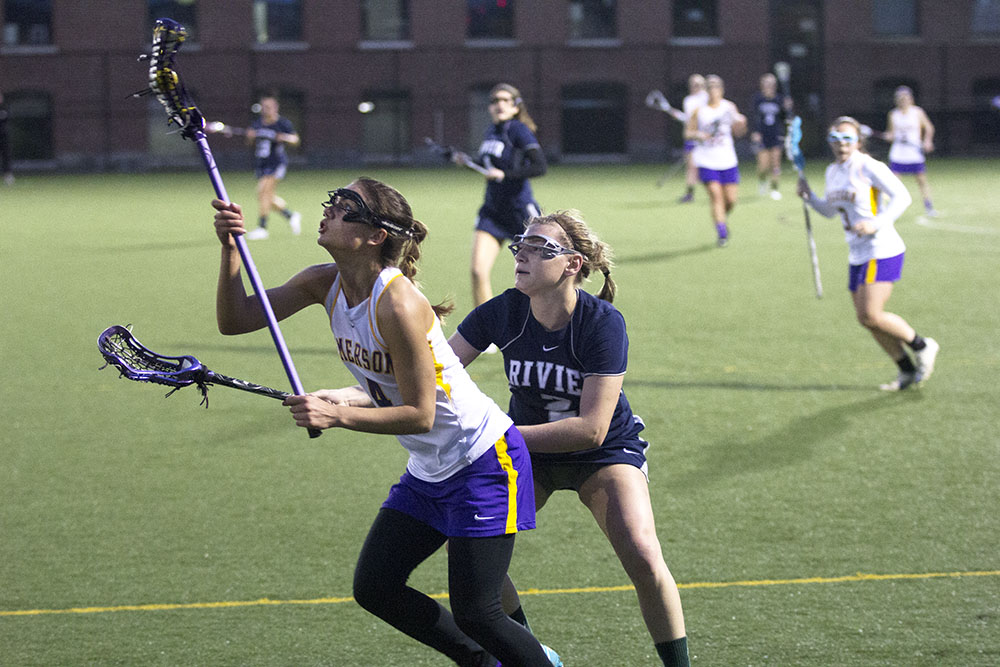 On Wednesday, with just under two minutes left in the game, Chelsea Phillips dived to pick up a short thrown pass and spun around several defenders. She threw the ball past the goalie and into the upper left-hand corner of the net, concluding a second half in which Emerson dominated both sides of the field in its win over Rivier University.

After allowing a quick goal two minutes into the second half, the Lions responded by scoring four goals over the next 25 minutes. The team dominated possession of the ball by winning draw controls 16 to 6, ending the game with a final score of 13-7.

Emerson’s elongated possession also forced Rivier to commit 22 fouls in the second half.

Head coach Megan Moore said she stressed defensive pressure during halftime, as the Lions had allowed Rivier to score several fast break points in the first half.

“Sometimes we’ll have a problem of getting ourselves into a defensive lull, and we’ll underestimate what our opponents are capable of,” Moore said. “So at halftime, we really wanted to emphasize getting in front of cutters, and not give up anything inside.”

Phillips, a midfielder and the team’s leading scorer, said that the Lions’ offense and defense gradually became more fluid as the game progressed.

“I think at the beginning, it took us awhile to get warmed up,” said the junior marketing communication major. “Especially on offense, it takes a little bit of time to get the ball moving and making good cuts, but once we got our movement down in the second half, it was a lot better.”

Phillips scored three goals in the second half and six goals overall.

Victoria Kanaris, a goalie, said that in later periods the Lions were able to dictate the tempo.

“[In the first half] we let some girls get through on the fast break, which is really the only way [Rivier] was able to score on us,” said Kannaris, a freshman visual and media arts major.

The win improved the women’s lacrosse team’s record to 7-6 overall and 4-2 in conference play.

The team’s next game is scheduled for April 13 against Emmanuel College at Rotch Field.