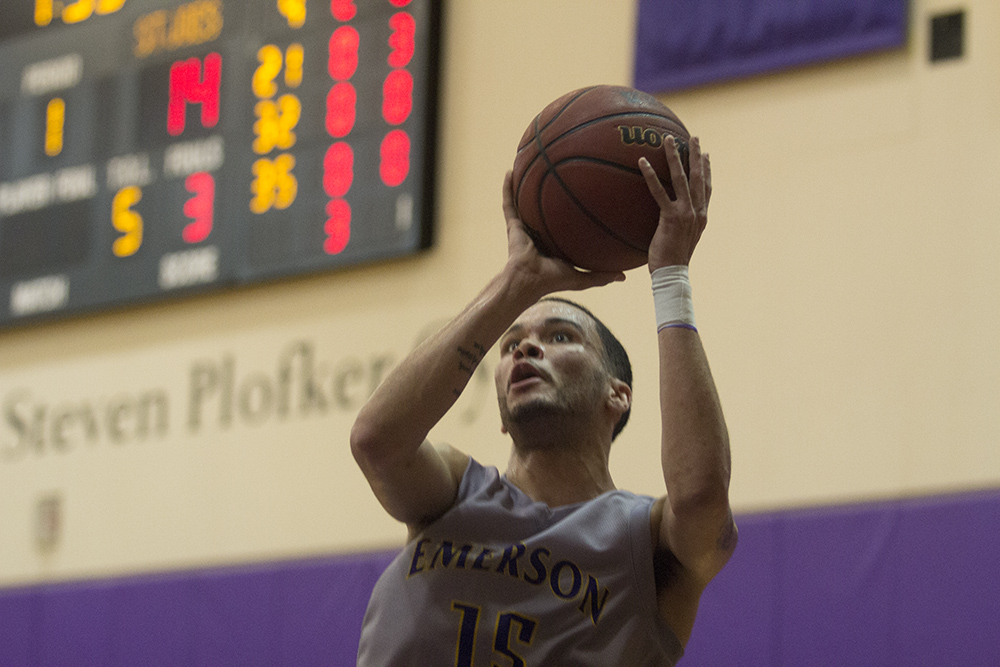 Player of the Game: Austin Pinckney

Junior transfer Austin Pinckney had his best game of the season, leading the Lions past the visiting Jumbos (3-1) with his first double-double at Emerson as he totaled 14 points and 13 rebounds. The 6-foot-6 Pinckney showed off his range with three 3-pointers. Senior captain Jon Goldberg also had a strong showing with a game-high 17 points to go with eight rebounds and four assists. Goldberg shot nine of 10 from the free throw line. Sophomore guard Michael Thorpe racked up 13 points, six rebounds and five assists, while Tyson Hallowell chipped in with 10 points. Junior captain Eli Kell-Abrams scored all six of his points in the first half as the Lions jumped to a 37-25 lead at halftime.

Player of the Game: Tyson Hallowell

Sophomore guard Tyson Hallowell led all scorers with 16 points even as the visiting Lions struggled from the floor in Cambridge. Hallowell went 6-for-13 from the floor against the Lynx (1-4) as his teammates combined to shoot just 31 percent on field goals, and converted on just two of 25 attempted 3-pointers. Michael Thorpe and Jon Goldberg both had versatile performances. Thorpe finished with 10 points, six rebounds, three assists, and three steals, while Goldberg had nine points, eight rebounds, and four steals. Austin Pinckney finished with eight points and eight rebounds. Emerson was competitive early, and held a 41-39 lead eight minutes into the second half before Lesley strung together a 13-2 run.

Player of the Game: Michael Thorpe

Sophomore guard Michael Thorpe paced the overmatched Lions with 14 points and four rebounds as they fell to the Cardinals (5-2) in the opening round of the Harbor Invitational. Thorpe went 5-for-6 on field goals, including a pair of 3-pointers, also sinking both free throws he attempted. Sean Duffy contributed a quick 10 points and four rebounds in nine minutes, while Kyle Edwards corralled four offensive rebounds and Brian Hurley blocked four shots. Wesleyan went on to defeat host UMass-Boston in the tournament final.

Player of the Game: Jon Goldberg

The Lions bounced back from consecutive losses by knocking off the Fighting Saints (3-5) in the consolation game of the Harbor Invitational held at UMass-Boston. Senior Jon Goldberg finished fourth on the team in scoring, but made the largest impact with 12 points, 17 rebounds, and six assists. Goldberg’s rebound total and eight offensive boards were each the most of any Emerson player this season. Sean Duffy led the Lions with 17 points to go with five rebounds, while Eli Kell-Abrams followed with 16, and Michael Thorpe chipped in with 13. Junior Dan Boylan hit three 3-pointers to provide a spark off the bench.

Player of the Game: Michael Thorpe

Sophomore point guard Michael Thorpe scored 27 points for the Lions’ highest point total of the season, scoring 21 in the second half of Emerson’s blowout of the visiting Falcons (5-5). Thorpe made 10 of 14 field goals and contributed three assists. Sophomore center Brian Hurley came off the bench and scored 17 points, his highest total of the season, also pulling in eight rebounds. Sophomore guard Tyson Hallowell also chipped in with 11 points and four assists. As a team, the Lions shot 54 percent from the field.

Player of the Game: Catherine Cloutier

Despite suffering their first loss of the season to the visiting Dolphins (4-1), junior forward Catherine Cloutier contributed for the Lions in all aspects. Cloutier compiled 12 points, 11 rebounds, seven assists, and three blocks, and went 5-for-9 from the floor as her teammates shot just 28 percent. Fellow junior Kristin Brice had 16 points, 12 rebounds, and four blocks, while Janissa Delzo contributed from the backcourt with 14 points, three rebounds, three assists, and three steals. Emerson led often in a game that was close throughout, holding its final lead, 57-56, with 5:02 left to play after a layup by Cloutier, but squandered a chance to tie the game in the final seconds.

Player of the Game: Janissa Delzo

Sophomore Janissa Delzo paced the Lions in their first NEWMAC loss, totaling up 13 points, six rebounds, and three assists as they fell to the Blue (4-2, 2-1) at home. Freshman Elizabeth Horan hit four 3-pointers to follow close behind with 12 points. Kristin Brice chipped in with eight points, seven rebounds, and four blocks, while Kelsey Johnson had six points and six rebounds. Emerson took a 7-0 lead out of the gate, but Wellesley scored eight consecutive points to take the lead, going in front for good, 10-9, six minutes in.

Player of the Game: Kristin Brice

Kristin Brice had a double-double with 15 points and 11 rebounds as the Lions fell on the road in a NEWMAC contest against the undefeated Lyons (6-0, 4-0). Catherine Cloutier followed with eight points and four rebounds, and Kelsey Johnson controlled the boards with nine rebounds, and three blocks, both team-highs. Johnson also contributed seven points. Elizabeth Horan hit two 3-pointers for six points.

Μale Athlete of the Week:

Over his last five starts, Thorpe is averaging a team high 15.4 points per game, including Emerson’s top scoring performance of the season with 27 points against Fisher College on Wednesday. Thorpe leads the Lions this season with 3.8 assists per game and tied for the steals lead, averaging 1.5 per game.

Female Athlete of the Week:

Delzo has started all six games for the Lions and reached double-digit points in four of them, including 14 versus Staten Island and a versatile 13 points, six rebounds and three assists against NEWMAC foe Wellesley.

Assistant sports editor Connor Burton did not write or edit women’s basketball recaps because he is dating a member of the team.