Men's basketball out to prove itself in NEWMAC 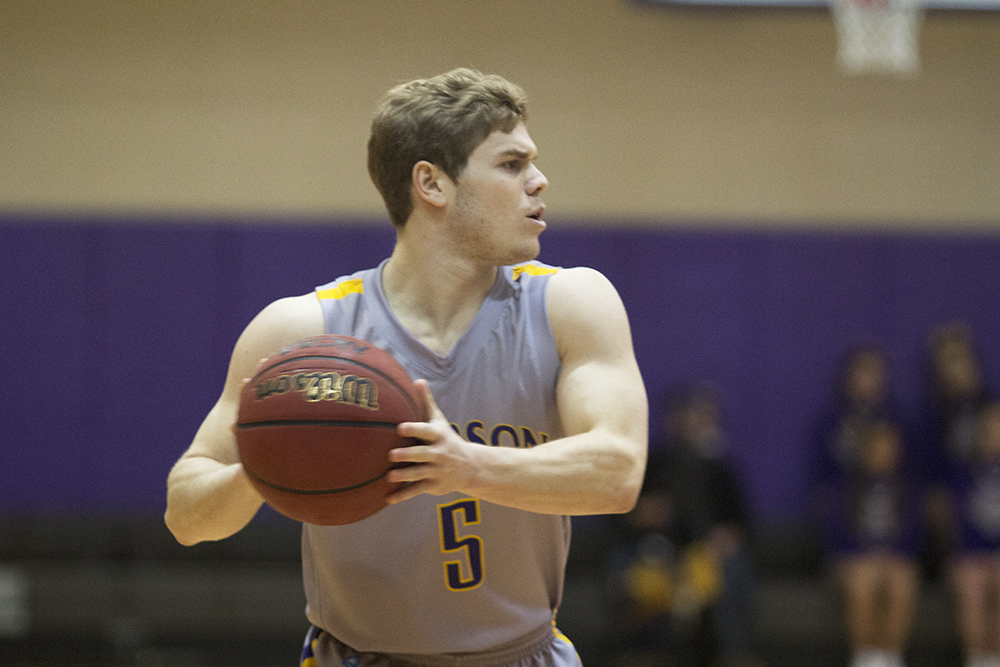 Despite landing in last place in a New England Women’s and Men’s Athletic Conference preseason coaches’ poll, the Emerson men’s basketball team is preparing for a statement season in its first year since leaving the Great Northeast Athletic Conference.

“I’m not thrilled that we’re given no respect and were selected eighth, but I understand it completely,” said third-year head coach Jim O’Brien.  “But that does not make it any easier to like.”

O’Brien, who has been coaching collegiate basketball for over three decades, has experience transitioning between conferences, having coached in the Atlantic 10 while head coach at St. Bonaventure, the Big East during his tenure at Boston College, and eventually the Big Ten Conference when he became head coach of the Ohio State men’s basketball team.

Even though he has the chops for it, O’Brien said the jump from the GNAC to the NEWMAC, both Division 3 conferences, will present challenges that he hasn’t seen before.

“Previously, it was just me that had to make adjustments, not the players that I inherited,” O’Brien said. “The difference here is that everyone has to make the adjustment.”

The NEWMAC features some of the top Division 3 men’s teams in the country, including Massachusetts Institute of Technology, which made it to the Final Four in 2012 before losing to eventual champion University of Wisconsin-Whitewater. Another top team, Worcester Polytechnic Institute, ranked ninth in the country, holds the top spot in the NEWMAC preseason coaches’ poll.

“What everybody needs to learn is how the league operates, the level of the competition, and the styles of play,” O’Brien said. “Moving from the Big East to the Big Ten, there wasn’t much of a difference. This is more like an Ivy League school going into the Atlantic 10.”

Jon Goldberg, a captain and the squad’s only senior, said the Lions first learned about their coaches’ poll ranking after sophomore forward Brian Hurley sent the list to the entire team via a group text message.

“I was pissed off,” said Goldberg. “They didn’t give us any credit. It wasn’t unexpected, but now everyone is motivated and now it’s time to prove people wrong.”

Last season, Goldberg was one of two players to start all 27 games for the Lions and he averaged 7.8 points per game, a scoring rate coach O’Brien said he would like to see increase.

“[Goldberg] has been a reluctant star,” O’Brien said. “I’m hard-pressed to find another guy in all the years that I have been coaching that you had to badger to get him to shoot the ball more. He is a different guy. He has so much ability and we have been trying for two years to get him to accept his role as a potential go to guy. He has so much more that he can bring to the group.”

Emerson’s 2012-2013 season ended with three consecutive losses, two of which came at the hands of St. Joseph’s College of Maine. In last season’s regular season finale, Emerson lost to the homestanding Monks, 77-44. Three days after being blown out, the Lions faced the Monks again in the first round of the GNAC playoffs and lost 73-68 in overtime on their home court.

After finishing 15-12 and 13-5 in the GNAC last year, the Lions graduated two senior contributors in guards Bilali Mack and Eric Wahl. They’ll also lose junior forward Patrick Lowndes, a starter last year, and senior shooting guard James Rhodes. Both players decided not to return to the team this season, although Lowndes will still be nearby, having picked up a gig doing men’s basketball play-by-play for the Emerson Channel during home games.

Despite bringing in zero freshman recruits over the offseason, O’Brien was still able to add some much needed size to the frontcourt by bringing in 6-foot-6 forward Austin Pinckney, a junior transfer from Division 2 Northwood University, which is located in West Palm Beach, Fla.

“[Lowndes] was a major loss, but we are expecting big things from [Pinckney],” said Goldberg. “He is a monster on the boards. When he gets down low, no one is stopping him. When he decides to take over, he will. He fits into the team’s scheme really well already.”

Despite Pinckney playing only sparingly last season at Northwood University, O’Brien said his expectations for his new post player are sky-high.

“When you look at his game, you just right away notice that he is loaded with talent,” O’Brien said. “He’s missed a year of high level competition, but he gives us a lot of size, he can rebound, score, and pass pretty good. All of those things make us happy he is going to be there.”

Another player looking to play a major role for Emerson this season is junior point guard Eli Kell-Abrams, the Lions’ other captain, who only played in nine games last season after breaking a bone in his right foot twice.

“I’m going to try to bring as much energy as I can while I shake the rust off,” said Kell-Abrams. “My role will be to get everyone the ball and make sure we move cohesively as a team.”

“Eli brings a lot of tenacious energy,” Goldberg said. “He is that ‘X-factor’ and I’m expecting him to have a good year. When he is in the game, he changes the game.”

Coach O’Brien said he is happy to have Kell-Abrams back to complement a more mature backcourt, which will also include last season’s leading scorer Michael Thorpe (11.5 points per game) and sophomore guards Tyson Hallowell and Mike Carbone.

“We are stronger, we are better, and we are more mature,” O’Brien said. “Eli is a big bonus. He gives us a lot of enthusiasm and having the extra guy like him available in the backcourt will help us a lot. I hope that year’s experience has paid dividends for our young guards.”

The Lions will begin their 2013-2014 season at Bobbi Brown and Steven Plofker Gym on Nov. 15, hosting Framingham State at 7:30 p.m. in the first round of the Emerson Tip-Off Classic.