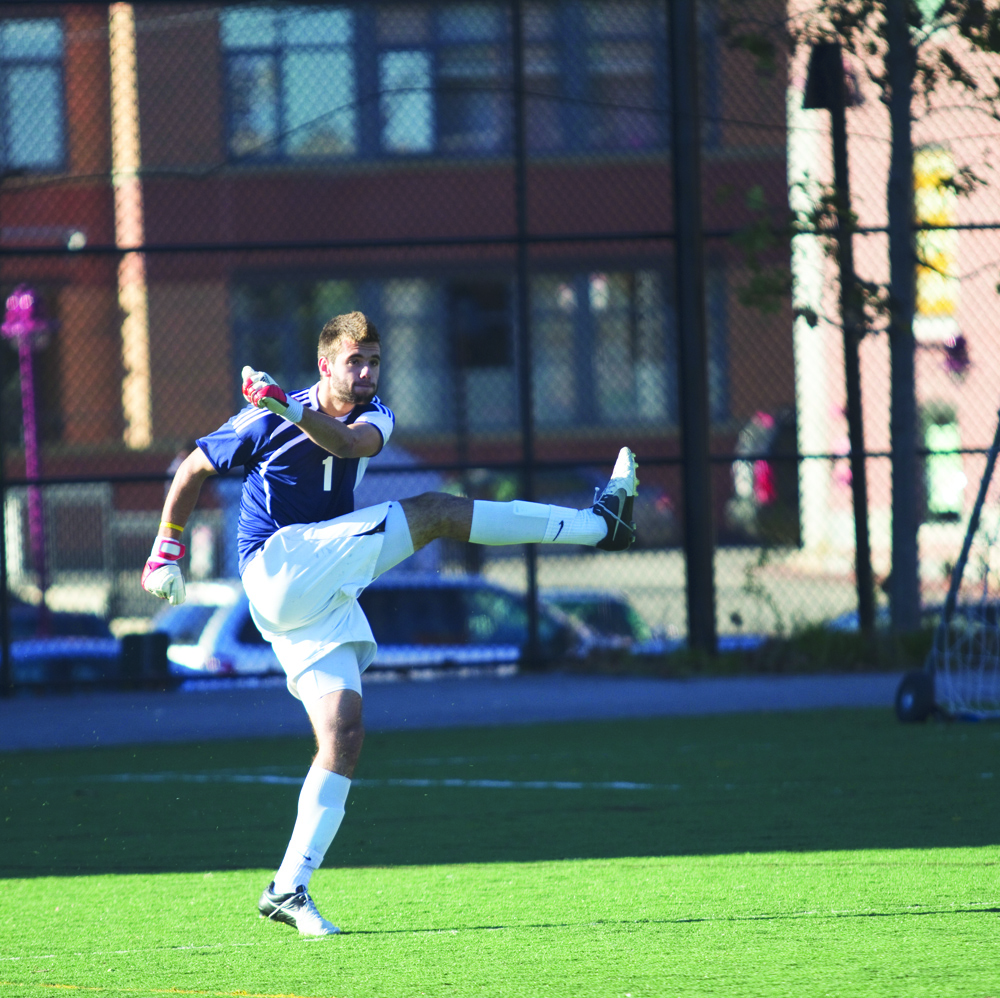 Welcome to the first installment of the Emerson sports roundup, a weekly feature recapping every game from the previous week.

Player of the Match: Carter Bowers

Sophomore goalkeeper Carter Bowers (six saves) propelled the Lions past the homestanding Raiders (1-8-1). Three different players scored for Emerson in the first half, including sophomore midfielder Austin Alphonse in the 12th minute, for his third goal of the year. Thirteen minutes later, senior midfielder Jon Havens put away a pass from sophomore forward Adam Halliday to put the Lions up 2-0. Kilian Fisher, another sophomore midfielder, scored the Emerson’s third goal, his first of the season, with 26 seconds remaining in the first half. The Raiders’ only goal came in the 78th minute.

Player of the Match: Adam Halliday

Sophomore forward Adam Halliday and sophomore midfielders Austin Alphonse and Mitch Lapierre led the Lions with three shots on goal apiece in a road loss to the Beacons (8-4-1). Halliday’s 33rd minute header was Emerson’s best scoring opportunity of the game, but was grabbed by the UMass-Boston goalkeeper. The Lions were outshot in the match 19-12, but held a 5-3 advantage in corner kicks.  Halliday received a straight red card in the 59th minute with Emerson trailing 3-0. Goalie Carter Bowers made four saves before coming off for sophomore classmate Jacob Sigler (one save) in the 52nd minute.

Player of the Match: Lacey Russell

Senior Lacey Russell led the Lions with dominant performances in singles and doubles over the Pioneers (1-6, 1-6) in Northampton. Russell played at number one singles and won her match in back-to-back 6-0 sets. In doubles, the duo of Russell and senior Savannah Mosser defeated the Pioneers’ number one team 8-4. Emerson’s victory also included a strong doubles performance from juniors Jana Winfield and Natalie Nichols, who won 8-5. Winfield and Nichols both won their singles matches, as did Sophia Trilling, who came out on top in a 10-8 tiebreaker. Trilling also teamed with Madeline Bilis for an 8-5 win in third doubles.

Player of the Match: Savannah Mosser

Savannah Mosser picked up both wins for the Lions in a loss to the Blue (7-2, 6-1), topping Andjela Stojkovic, 7-5, 6-1, in second singles and then combining with Lacey Russell to take an 8-4 victory in first doubles.

Player of the Match: Alyssa Thorne

Senior Alyssa Thorne led all hitters with 12 kills, followed by freshman Julianna Augustine (10 kills) and junior Kat Rice (nine kills) as the Lions topped the Panthers (10-9) by set scores of 25-23, 25-19, and 25-23 in their first match at the Johnson & Wales Invitational in Providence, R.I. Sophomore Juliana Tucker had 37 assists and 10 digs, while Jamie Morgan (16 digs) and Heather Park (15 digs) helped out on the back line.

Player of the Match: Julianna Augustine

Middle hitter Julianna Augustine led the way with 10 kills on 18 attempts to send the Lions past the Pride (8-16) by set scores of 25-12, 25-16, and 25-18 at the Johnson and Wales Invitational. Outside hitter Kat Rice contributed a versatile five kills, five service aces, two blocks, and two digs. Sophomore Kat Westbrook had seven kills, her second-best total of the season, while setter Juliana Tucker assisted on 31 Emerson kills.

Player of the Match: Kat Rice

Junior Kat Rice racked up 22 kills, the highest single-game total of any Lions player this season, as Emerson fell to the Bears (15-5, 4-2 NEWMAC) by set scores of 25-21, 25-19, 16-25, and 25-22. Senior Alyssa Thorne chipped in 17 kills, her second-best total of the season, against a Coast Guard squad that went on to win the Johnson & Wales Invitational. Setter Juliana Tucker also had a standout performance with 17 service aces and 42 assists, while senior Brandy Eggermann led the Lions with 20 digs.

Player of the Match: Kat Rice

Player of the Match: Alex Lynn

Sports editor Carl Setterlund picked the Women’s Athlete of the Week and contributed women’s volleyball recaps to this report.