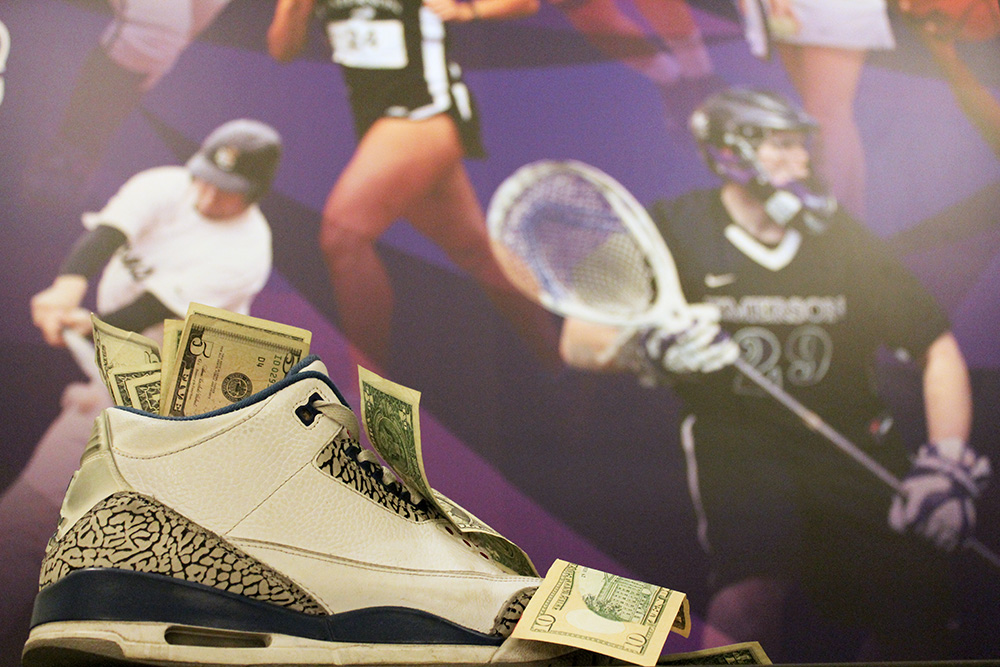 Turn on any network or cable TV station and you’ll see the videos: that last half-court shot made in the nick of time with mere seconds to spare. There are the highlight reels of the crowd’s reactions, college sports fanatics clutching their foam fingers and girding their popcorn tubs, eager to ensure their team’s victory. At home, some yell at stationary TV screens or struggle to not get cheese dip on their favorite player’s jersey. the TV-friendly world of college athletics has a gilded luster, but at the end of the broadcast, it’s a business, one worth over a billion dollars a year.

But there’s a caveat: Every frame of footage and every television broadcast and post-game interview has its price, and college athletics’ most notorious bill collector comes calling. The National Collegiate Athletic Association is the leading and most treacherously trusted name in undergraduate sports, with an empire built entirely off of the workforce of athletes that are unpaid. Call it a first world consequence of the otherwise glamorous life of being a jock, but this unpaid status is a civil rights issue of unpaid labor. College sports incurs billions of dollars a year, and its participants should finally be allowed to to reap the monetary benefits of their own labor: College athletes of Division 1 NCAA teams should be paid.

According to an aptly-titled Forbes report called “The Business of College Football”, the University of Texas Longhorns are the most profitable team in the pigskin sport, the highest grossing of all NCAA sports. Valued at $133 million (a figure, according to the article, determined by “the money generated by each team for its athletic department, its university’s athletic programs, other conference teams and the local business community”), the Longhorns annual return is nearly $80 million. The fiscal solvency of second-ranked Michigan Wolverines isn’t much different: Valued at $120 million, the football team alone yields $62 million. The Tennessee Volunteers, the ninth most profitable team according to Forbes, is valued at $85 million with $35 million in annual earnings. This excess has had widespread beneficiaries: In 2009, Monte Kiffin, a member of the Vol’s coaching staff, became the first assistant coach in the history of any NCAA-sanctioned team to earn a million dollar salary, plus benefits.

That’s a lot of numbers, but, more importantly, it’s a lot of millions, and it’s only the money generated from the most popular and successful teams in only one sport. Making money off of college sports isn’t a crime, though there is serious misconduct in the money’s distribution. Between officials and players, a huge fiscal disparity exists: In 2007, University of Alabama Head Coach Nick Saban signed an eight year contract with a guaranteed salary of $32 million (plus a $700,000 bowl game-bonus). At Alabama and other schools like it, according to The Atlantic, some players are unable to afford such casual pleasures as movie tickets or a trip home as their ostensibly free education comes with a lifetime’s worth of strings attached.

After college, these strings quickly turn into chains. Though athletic programs provide access to a discounted education that might have otherwise been unavailable, it is limited: Students are indebted to the institutions in ways with troubling ramifications. Not only are the scholarships offered by schools not nearly complete, according to a CBS news report, colleges and universities expend a significant amount of effort to ensure that the scholarships are not automatically annually renewed. For an activity that is supposed to value learning, higher education institutions and the NCAA have already made the intrinsic value decision that student-athletes are only as valuable as the hat tricks they make or the bases they run. In many cases, scholarships are revoked and medical bills abandoned after the camera lights have dimmed on the injured players that make the 24-hour news cycle.

There’s an allure to college sports, a lust inherent in a lot of us for the school spirit that often comes with them, and it’s a shame that most of this comes at the expense of the athletes that provide it. The inherent assignation of value necessary to pay them has already been made-- for decades, student-athletes at big name schools have been forced to be more athletes than students, and it’s time they are allowed to benefit from the spoils. College athletes are no longer amateurs, and the universities they play for and the NCAA that sanctions their participation long ago decided that their value was not in their GPAs but their play. Undergraduate athletes should be paid a flat rate for their participation, and at least a percentage of profits from jersey and ticket sales to ameliorate a pay discrepancy that is so obviously not in their favor.