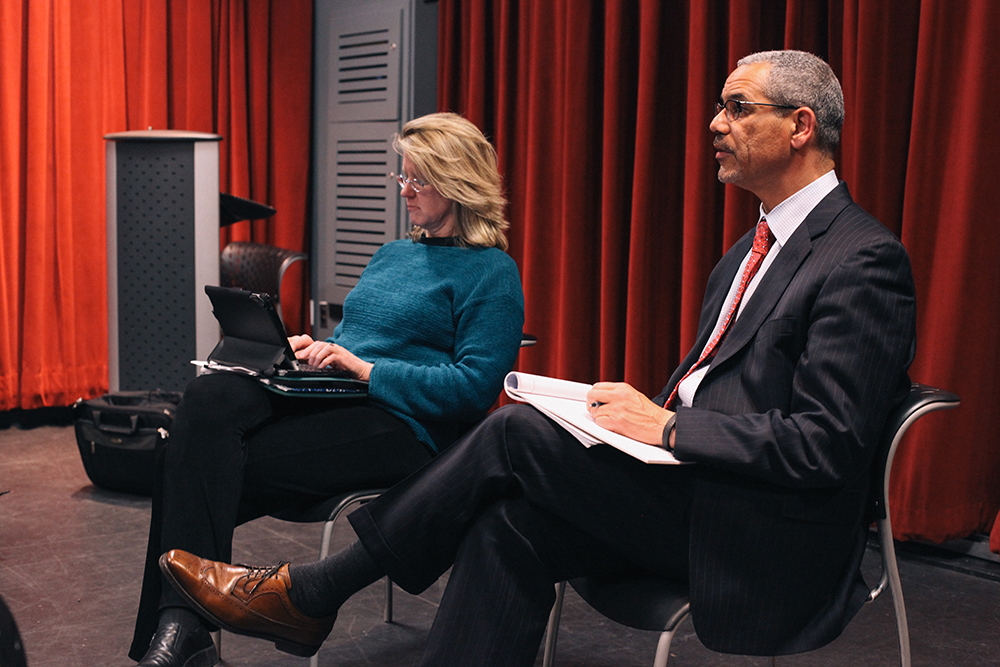 At meetings held exclusively for students by the consulting company Margolis Healy & Associates on Tuesday, students discussed what they saw as a disparity between the college’s sexual assault policy and its execution, including a lack of accessibility to educational resources on Title IX and the Clery Act, and transparency regarding its practices.

At all meetings, Healy started the discussion with a trigger warning, and encouraged students to comfort anyone who was affected by the language and to leave the room if needed.

Due to the expectation of confidentiality in the meetings, the Beacon will not publish names of students quoted, unless they consented to be identified.

At the SGA event, a student expressed concern about the administration’s follow-up treatment for sexual assault survivors.

“No one is satisfied with the conduct process,” the student said. “People come out of it feeling jilted, or even spurned, by the college.”

Margolis Healy was hired by the administration to assess Emerson’s compliance with Title IX and the Clery Act, a law that requires disclosure of campus crimes, in response to three students filing a federal gender discrimination complaint against the college in October.

The purpose of the visit, according to Healy, was to gather information in an open discussion about students’ perceptions of the college’s procedures to prevent and respond to sexual assault and sexual violence. Healy and Langford also held similar forums on Tuesday and Wednesday with faculty and staff.

At recent events where students were invited to meet finalists for a sexual assault survivor advocate position, attendance was low.

Some said reaching out into the administrative structure was the only way they could find the information they were looking for on Title IX and the Clery Act, and the steps students need to take to file a case.

Buckley said her involvement in the team is the only reason she clearly understands the issues Healy and Langford were addressing.

Margolis Healy’s recent visit is the third one this year, but the first public meeting, and is the culmination of the information-gathering phase the team of nine began in January, according to Healy. Now, the firm’s personnel will analyze the material and come up with advice for the college.

“We will make any and all recommendations that we think are appropriate for the college to have the best possible strategy to prevent and respond to sexual assault,” said Healy.

Many SGA members, some of whom are or have been resident assistants, spoke positively about changes implemented in the past two years surrounding RAs’ roles in preventing and responding to sexual assault.  They specifically referred to the requirement of the Office of Housing and Residence Life to have hall bulletin boards and hold programs related to sexual assault prevention at least two to three times a year.

Healy and Langford also addressed what the college is doing to make students feel safe.

Some said the Emerson College Police Department refuses to respond to student calls for help if incidents occur just outside their set paroling area, like in the Common or near the CVS on Boylston.

Allison Singer, class of 2015 senator and a junior writing, literature, and publishing major, said at one of the student forums she recently worked to engage the services the ECPD offers, even if beyond its jurisdiction.

“There is an area between 80 Boylston and the Orange Line stop where students have repeatedly said they felt unsafe walking there; a lot of them have reported being verbally harassed, a couple said they have been chased,” said Singer. “Recently, ECPD has spoken with SGA office and said that its not their jurisdiction and there is nothing they can do about it, which doesn’t feel like a solution.”

Langford said she was satisfied with the student engagement in the forums.

“I’m encouraged by the fact that people are asking for more information about processes, and how they work. They want to understand what’s in place [and] what services are available,” said Langford, who worked in the Department of Education helping universities with violence abuse prevention. “It’s a good position for the college to be in.”

Healy said in an interview before the sessions he expects the Margolis Healy’s final report to be ready for the college by the end of this spring semester.

“At the end of the day, this is really about how the college protects its students,” said Healy.