Two debate for SGA presidential seat, the only contested position 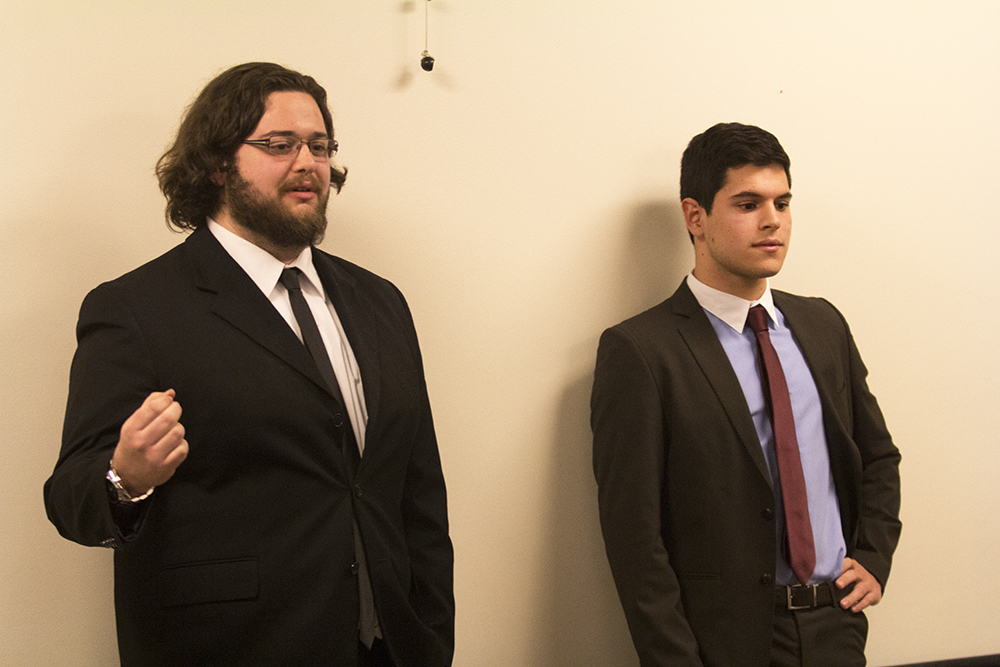 In a debate for the position of Student Government Association President, Benjamin Halls and Paul Almeida traded sharp comments and explained their goals with the hope of taking the title.

Halls, a junior, and Almeida, a sophomore, have both served on SGA for three semesters. Almeida was the executive assistant to the president for two and a half semesters. On Feb. 20, he became marketing senator after running unopposed.

Halls was the class of 2015 president last year, before his high school credits transferred to Emerson and he moved to a junior status. Last semester, Halls ran unopposed for the class of 2014 senator.

During his speech on Wednesday night, Halls proposed four main goals: reforming the SGA financial model, rehabilitating relations with the trustees, enhancing student engagement, and conducting an annual survey of the Emerson population about their sentiments and concerns.

Almeida, a marketing communication and political communication double major, said his main goals for his presidency would be to increase the hours that the fitness center and rehearsal studios are open, require a midterm student evaluation of professors, and work on increasing the amount of print credits students are given for free.

The candidates differed in opinions about student organizations appealing for funds from the SGA. Halls said appeals that happen annually, such as the Evvys, should take place a the beginning of the year. Contrarily, Almeida said appeals should be granted on a first come, first serve basis and not amended once they reach a vote at meetings.

This is not the first time Almeida and Halls have faced off for an SGA position — in the fall of 2011, they, along with Donovan Birch Jr., campaigned for class of 2015 president. Halls won a plurality of the initial election, with 36 percent of the vote, but failed to reach the 51 percent of the vote needed to win outright. The election was then brought to a runoff between Halls and Birch.

While campaigning for that spot last year, Almeida told voters he served as the president of his high school class at Watchung Hills Regional High School. Susan Obuch, an assistant to the principal of the school from which Almeida graduated from in 2011, said he was not class president and never served on student government.

Although Almeida did not acknowledge the incident in his speech on Wednesday, he apologized in a post-debate interview with the Beacon.

“I acknowledge that I made a mistake. I lied to people that I care about,” he said. “I don’t think one mistake defines me or my character. This is an organization I care deeply about. [SGA] is such a fantastic institution. That [the lie] has no bearing on what my motivations were and who I am striving to represent.”

As a start to his hope to increase print credits next year, Almeida said he is currently working on an initiative to grant writing, literature, and publishing majors more of the funds, which he said is in its final stages.

“I’ve personally spoken to WLP students who are paying $100 out of pocket to print. That’s the money they need for rent or food, and that’s just not acceptable,” said Almeida.

Tau Zaman, SGA president for the past three semesters, asked Almeida why the initiative has not been completed yet. Halls said Almeida only sent one email to the group working on the initiative.

“I had a meeting where I discussed the issue, but at the time where we are divvying up tasks, [Halls] said he was too busy to participate,” said Almeida.

Caitlin Higgins, the SGA vice president, mentioned in a separate inquiry that Almeida has only had a vote in joint session meeting for six weeks, while Halls has voted since his freshman year.

Halls said he believes Almeida is at a disadvantage here.

“It breaks your heart when you don’t feel like you’ll be able to vote yet, but occasionally there are instances when you have to,” Halls said. “To know by raising your hand you are saying to your peer that you shouldn’t be able to do this in this way is so hard.”

“It hurts me a little to say voices are more important if those members have a vote,” he said. “Everyone’s voices matter.”

Zaman later asked Halls what exactly his role in a public safety initiative was earlier this year, since he did not write or draft it.

Halls answered that he did not have his notes on him and was unable to give a specific answer.

“I wish I could take notes out on safety, but I would have to go through all my emails,” said Halls.

Polls open April 2 at midnight and close April 3 at 11:59 p.m. A candidate must receive the majority of all votes to win. Students can vote at vote.emerson.edu.