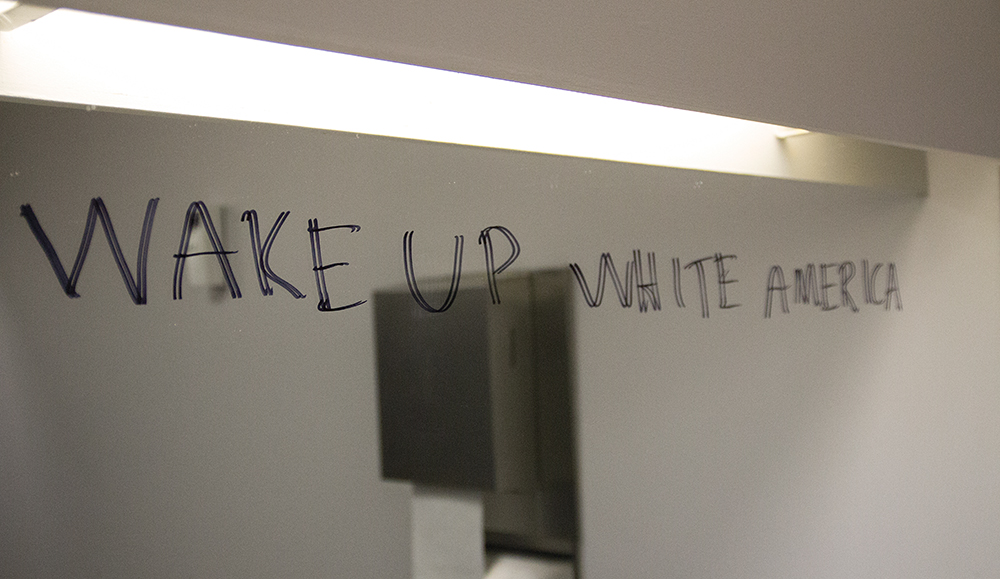 In the past two weeks, four Emerson buildings have been defaced by graffiti that college administrators have described as discriminatory and racially offensive. Officials have informed the community about the crimes, stating they have had a detrimental effect on the campus atmosphere.

On Monday morning, a Paramount Center resident discovered the phrase “kill the whites” on an elevator in that dormitory, according to David Haden, the director of housing and residence life. The same week in Piano Row, two instances of vandalism were reported. The word “muff” was written on a resident’s whiteboard on Tuesday night, and was also found on a 10th floor bulletin board.

On Wednesday night, the phrase “wake up white America” was graffitied on the men’s bathroom mirror in the Iwasaki Library. Andrew Tiedemann, vice president of public affairs, said he considered that incident “disturbing,” but declined to comment further.

A resident assistant also discovered the word “jews” written on a fifth-floor men’s bathroom in the Little Building, Feb. 11 according to Haden, which he said might be connected to the other defacements in that residence hall. On Feb. 9, the N-word and the phrase “Black people, Jews, and Christians” were found inscribed on a Little Building elevator.

In response to the Paramount vandalism, an email signed by Shaunice Jordan, the Paramount resident director, was sent by Haden to residents of that building notifying them of the graffiti. With almost identical wording to the email sent to Little Building residents about that dormitory’s vandalism — except for the name of the building — Jordan wrote that the incident indicates students may not understand how their words can negatively affect others.

“Comments such as this can create a hostile and unwelcoming environment for many, if not all, members of our community,” she wrote.

President M. Lee Pelton also sent an email to the Emerson community on Wednesday, asking students to consider the college’s values of inclusivity and respect.

“While no community is immune to acts of intolerance,” he wrote, “the strength of our community will be demonstrated by how we respond to this situation.”

Pelton added that Emerson is continuing to develop instructional resources for students.

“Ongoing diversity education programs are being offered through the Office of Diversity and Inclusion and the Division of Student Affairs,” he wrote. “In addition, we plan to work with members of our community to develop additional programs this semester and in the future.”

One such program being planned, according to Haden, is a presentation scheduled for Feb. 25 by Tikesha Morgan, the director of multicultural student affairs, titled What Would You Do?.

“However, the most powerful preventative measure that we have is for students to appropriately challenge one another,” he wrote, “and to share concerns with us when they become aware of disrespectful or harmful behaviors.”

Jordan’s email also informed Paramount residents about a meeting on Tuesday evening to discuss the vandalism. Yet as the discussion was set to begin in the the ninth floor common room, only two Paramount resident assistants had come to attend. One additional student, who said he preferred to remain anonymous, entered the room 20 minutes later to do his homework, and participated briefly in the conversation.

“What if somebody is actually being hateful?” Morgan said during the short meeting. “We are a pretty large community here, and I don’t think all of us feel the same way.”

Jordan said she was disappointed with the low turnout.

“This was a pretty extreme incident,” she said. “If people are concerned about their home, they would make the meeting.”

Morgan, though, said that she understands that students might not want to discuss such charged incidents.

“It’s not an easy topic to talk about,” she said.

Faryn Tobler, a senior journalism major, who did not attend the meeting in Paramount, said she has seen a change in Emerson’s response to vandalism since Pelton took office.

“In my last three, four years here, I’ve seen stuff like this, and we didn’t get an email every time,” she said.

But she added that she thought incidents like these were bound to happen.

“I think that it’s never a good thing when there’s intolerance on campus,” she said, “but I think it exists and it’s something that’s unfortunately part of life.”

Amanda Doughty, who lives in the Paramount dormitory, said she did not see the graffiti in her building, but was surprised that students would write such offensive terms.

“Last year, when they were advertising it, they said it was a really accepting school,” said the freshman writing, literature, and publishing major. “But then to hear about all these racial slurs is just really surprising and kind of appalling.”

She and Tobler both said, though, that the defacements haven’t affected their perceptions of Emerson students.

“It doesn’t really change the way I feel about the campus as a whole,” said Doughty.

Yet Morgan said she knew multiple students who had been hurt by similar incidents in the past.

“Even though you may not hear, and no one may say they’re having difficulties about it, there’s somebody who’s keeping it deep inside,” she said. “You can’t take that away.”