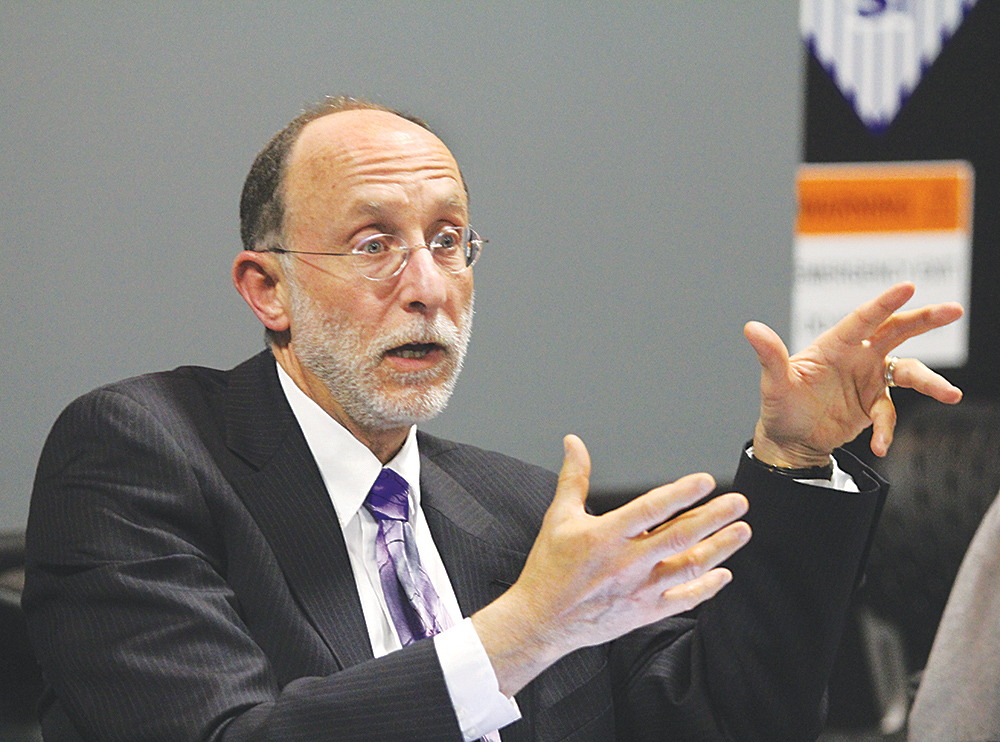 Emerson administrators reviewed current sexual assault policies and expressed their optimism about upcoming changes to the procedure in an exclusive interview with the Beacon Wednesday. This was the first time school officials other than President M. Lee Pelton publicly spoke after students reportedly filed a complaint with the U.S. Department of Education’s Office for Civil Rights, saying the college’s response to alleged sexual assaults violates Title IX, a federal anti-discrimination law.

Since the Family Educational Rights and Privacy Act, commonly known as FERPA, prohibits an educational institution from disclosing personal information about students’ records, these administrators could not address the particular allegations of complainants Sarah Tedesco and Jillian Doherty, who shared their stories with the Beacon last week.

In addition to her role in human resources, Jackson serves as the school’s Title IX Coordinator. Title IX, passed by Congress and signed into law in 1972, prohibits discrimination on the basis of gender in educational programs, and considers sexual harassment as a form of gender discrimination.

Jackson took on the position in Oct. 2011 after Russlyn Ali, who was then the Department of Education’s assistant secretary for civil rights, wrote a 19-page document about how institutions should conduct investigations into  sexual assault cases when they are reported internally.

Jackson said when she became the coordinator, she completed training on Title IX with a regional human resources company. In March 2012, she said she took a group of staff members to a program in Washington, D.C., where they learned how to act as investigators in sexual assault cases.

“The purpose was to make sure we had a good pool of investigators, male and female,” she said.

When charges of sexual harassment or violence are made against a student, investigators are in charge of interviewing both parties — the complainant and respondent — and witnesses. After the investigation, a hearing takes place by a three-member Conduct Board to deliberate on whether the respondent is found responsible or not responsible of violating the Student Code of Conduct.

According to Title IX, training administrators, teachers, staff, and students can help ensure that they understand what types of conduct constitute sexual harassment or violence, can identify warning signals that may need attention, and know how to respond.

All other staff and faculty members are briefed on Title IX online during the hiring process, she said.

In a new, more intensive procedure, resident assistants were trained this summer on how to respond when victims of sexual assault come to them. RAs are expected to provide appropriate support to victims and report cases of sexual assault to their supervisors, according to Ludman. He said that within the two-week training sessions for RAs, seven hours were dedicated to Title IX compliance procedures.

The college also offers to provide accommodations for victims of sexual assaults, such as changing living situations and class schedules, to minimize interactions between the survivor and his/her attacker, in accordance with Title IX.

According to Ludman, the Office of Student Conduct issues stay-away orders automatically for students involved in a sexual assault investigation. Those students would be required to cut off communication with one another. They would also not be allowed to enter each other’s dorm buildings, he said.

Tedesco, a sophomore journalism major, said although she reported her sexual assault case to the college, administrators did not immediately issue a stay-away order. Tedesco said she was raped at a Massachusetts Institute of Technology fraternity party last year by an MIT student and an Emerson student.

Tedesco said the alleged Emerson attacker lived on her floor during the fall semester of her freshman year. Despite Tedesco’s requests to administrators, the alleged attacker continued to live on her floor until the spring semester, and was not issued a stay-away order until January, she said.

After the 2012 winter break, the student moved off Tedesco’s floor because he or she was uncomfortable with the living situation, said Tedesco, but didn’t follow the school’s instruction.

“Even with the stay-away order, the student continued to visit my floor,” said Tedesco.

Tedesco said she was attacked a second time by the same student in March 2012 on a street near an Emerson building. Only after that alleged attack was the order enforced, she said.

“That was one of my big issues,” she said, referring to the complaint.

Ludman said that from a meeting in April with Way, members of Emerson Stopping Sexual Assault, and Elise Harrison, director of counseling and psychological services, the college developed a campaign of sexual assault awareness and prevention. Materials about creating a “culture of consent,” presented during orientation, were a result from this meeting, said Ludman.

The college also revised counseling brochures given to victims of sexual assault, a change Ludman said is also an outcome of that meeting.

Jackson said she hopes the college continues to work on improving its resources so Title IX requirements can be implemented as effectively as possible.

In a letter sent to the Emerson community on Oct. 9, Pelton announced that the college is seeking to hire a Sexual Assault Advocate, who will support students who have experienced sexual assault and oversee the college’s programs to respond to and prevent sexual assault.

Way said she is happy with this change.

“This person will not only be trained in the college procedures, but also trained in criminal justice procedures,” she said. Way said that this new full-time position is a big step forward in having a dedicated person on campus whose sole role is will be to advocate for sexual assault victims’ rights.

During the meeting, Way said she was not surprised there is dissatisfaction on how sexual assault cases are handled at Emerson, given how common this problem is among  institutions of higher education.

“I’m not surprised, given the national environment and the movement of victims’ rights, which is a positive thing,” she said.

Way said the complaint filed by students against the college is part of a larger movement of victims of sexual assaults demanding their rights.

Spears said in her more than two decades working in higher education, students speaking up can mean positive outcomes for the school.

“Students always have this incredible ability to always make us a better institution,” said Spears. “Even when we think we got it, the clarity of students often propels colleges and universities forward.”