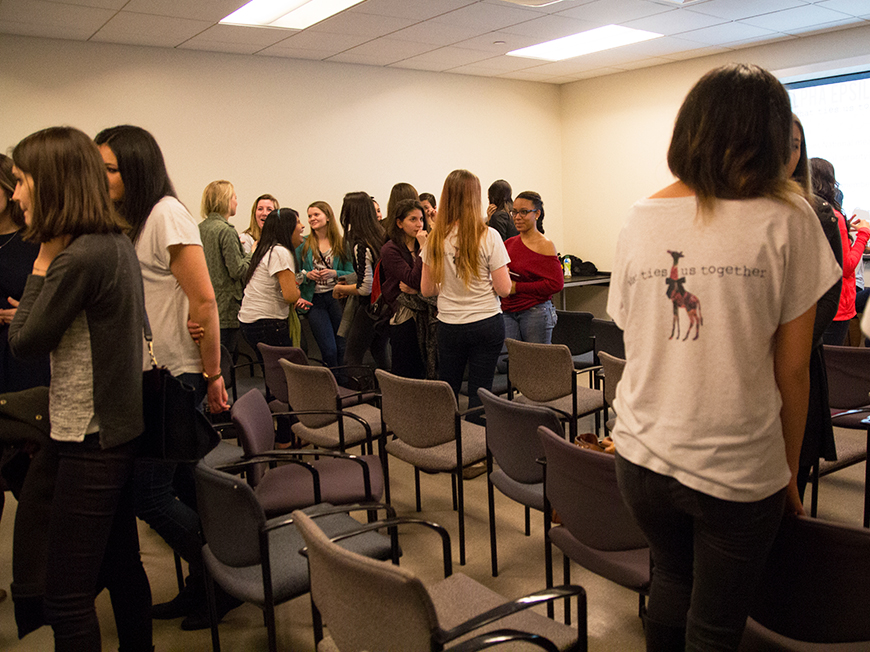 The 66 members of Emerson’s Alpha Epsilon Phi hold their Sunday meetings in a room on the fourth floor of the Walker Building. According to Miranda Quast, a member of the sorority, the quarters are cramped, and all members can’t fit into the space.

If her sorority had more space, she said, perhaps it could increase membership.

“There’s not a lot of people in it because they don’t know,” said the freshman journalism major. “We could be a much bigger face.”

Quast is not the only member of Emerson’s Greek community who has taken issue with campus space for Greek organizations. Zachary Anderson, a member of the fraternity Sigma Alpha Epsilon and the Greek life commissioner for the Student Government Association (SGA), is currently working on a Greek life space initiative.

With the initiative, he said he hopes to make more space available on campus for the three sororities and four fraternities.

Last semester, Sasaki Associates, a design and planning firm that Emerson hired to develop a long-term strategic plan, conducted a collegewide assessment of the physical campus. Anderson said this is what sparked his initiative for more space exclusively for the chapters.

“I think what Greeks lack, because we are such a distinct community on campus, is a place to be centralized. We don’t have a space, like the Multicultural Center,” Anderson said.

Fifteen other organizations have rooms on the lower level of Piano Row, including  E.A.G.L.E., The EVVY Awards, Emerson Independent Video, and the Musical Theater Society.

According to Anderson, the Greek community doesn’t have a designated place to hold chapter meetings, ritual and pledge events, or other affairs.

The Greek Council, which is in charge of allowing new chapters to form at Emerson, does have a space in the basement of Piano Row in room L133D. According to Jason Meier, the director of student activities, the space is too small for even regular council meetings.

Sigma Pi Theta President Anne Whitehead said she believes that Greek organizations should have more of an area to congregate.

“People don’t understand that Greek life is a bigger part of Emerson. It would be good for students who aren’t Greek to become interested and see what it is we do,” said the junior writing, literature, and publishing major.

As the Greek life commissioner, Anderson said he takes the needs and wants of his constituents and acts as a voice for them.

“I know that Greek life is not exactly the most prominent thing on Emerson’s campus. We want to make sure that Emerson knows just how much of a tight community we are,” said Anderson, a visual and media arts major.

The SGA has not yet seen the initiative, but President Tau Zaman, a member of Phi Alpha Tau, said he supports the community having more space.

“As a member of Greek life, I fully support the initiative, but even if I wasn’t involved, I would still support it,” Zaman said.

Some students not involved in Greek life do not think the organizations need more elbow room.

“I don’t know if I would want my money [going toward] that. I would be okay with it as long as I’m not paying for it,” said Allison Meikle, a sophomore film production major.

“If it is going to cost me money, then I am not for it. Why can’t they meet off-campus at an apartment?” she said.

Anderson said he believes space for fraternities and sororities will be beneficial for Greek life and its activities.

“I was thinking as we move forward and get more space, it would be really great for Greeks to come and hang out and use [it] for dominantly Greek events,” Anderson said.

Due to the small size of the college’s campus, the exact location Greek life could call its own has been undetermined, according to Anderson.

“We are hoping as Emerson acquires more property that Emerson finds us a space to put us in,” Anderson said. “I hope that before I graduate I could reap the rewards of this initiative.”