Faculty lecture on uprisings in the Middle East 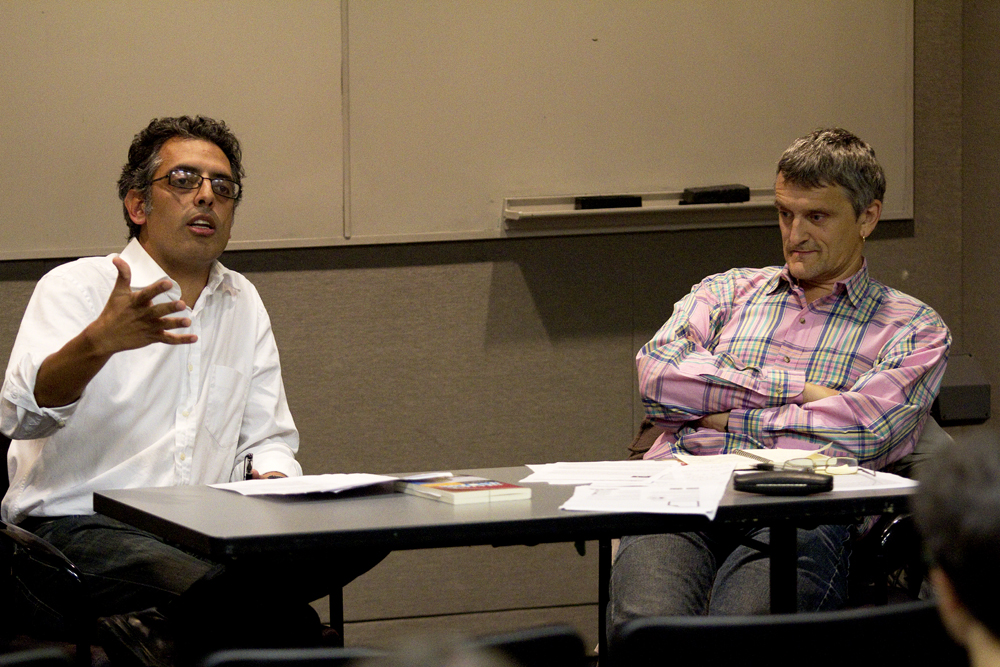 Scholar-in-Residence Yasser Munif and Director of the Honors Program Nigel Gibson shared first-hand recollections of the uprising in Syria, the relation of the movement to post-colonial theories, and the media involvement in the country to a group of 48 students and faculty Tuesday night.

Despite the uprisings of Syrian opposition groups, President Bashar al-Assad — unlike his counterparts Hosni Mubarak of Egypt and Muammar Gaddafi of Libya, who was murdered in October — has successfully resisted attempts to overthrow him. Similar uprisings have swept the Arab world for more than a year now. However, in Syria’s case, Munif said, it is a very complex and misrepresented situation.

“It is a multi-dimensional and quite powerful regime,” said Munif. “It is a violent regime, killing [civilians] left and right without repercussion.”

Munif— who teaches three courses within the Institute for Liberal Arts and Interdisciplinary Studies—said he recognized that there is an emergent movement against those who have held onto power and are not willing to give it up worldwide.

“I think beneath the surface there is a cataclysmic event going on, even if it doesn’t have a visible representation right now,” he said.

Munif, who spent a week in Syria in August, shared his stories from what he observed in the country. He described the new language of liberation used by some Syrian citizens. He also discussed the rediscovery of the pre-regime history of the country that, he said, is captivating many citizens.

Gibson linked the observations from Munif’s trip to Syria to the theories of Frantz Fanon, a Martinique-born psychiatrist who joined the Algerian liberation movement against French colonialism during the late 1950s. Fanon’s work is influential in the field of post-colonial studies.

“Fanon was interested in the liberation of the mind, as well as liberation from physical colonialism,” Gibson said.

Munif’s description of new trends in Syrian society, like the circulation of 12 to 15 new newsletters throughout the country, illustrates such liberation, said Gibson, who published a book titled Fanon: The Postcolonial Imagination.

“Colonization imposed states, lines on maps. One of the problems with the anti-colonial movement is that it took over the state,” Gibson said. “Why do we have to assume that the state is the foundation we have to hold on to? The connection between nation and state needs to be asunder.”

Gibson, recognized as one of the leading scholars of Fanon’s work and theory, said there are similarities between the uprisings happening now and the anti-colonial revolutions of Fanon’s era.

“We can put the struggles of Northern Africa and the Middle East in the same type of moment of the 1950s,” said Gibson. “This is a second act of the anti-colonialism movement.”

Munif spoke about the ethical standards developing in part with the new journalistic practices of Syrian citizens.

“There is an evolution of journalism [happening in Syria],” he said, “people are becoming really creative and really savvy.”

Since people are selectively choosing what information to make public and what should be private, it puts in jeopardy the strategies of opposition groups.

“This is ethical journalism, we are not supposed to know everything,” said Munif.

Junior Tyler Lepkanich said he studied abroad in Greece for six months at the time when revolts in Athens shook that nation and has since been interested in knowing more about other movements.

“It’s really mind-opening to learn what other people are going through,” said Lepkanich, a marketing communication major.

Emma Krause, a communication studies alumna who graduated in May 2012, said she enjoyed the informative descriptions shared by Munif.

“It’s nice to hear an Emerson professor speaking from the ground, [it shows] the importance of lived experience,” she said.

After both lectures, audience members brought up discussion topics such as the political parties involved in the Greek crisis, the lack of an uprising in Algeria, and the role that role social media is playing in the revolutions around the globe.

“The connection between the virtual world and physical world is very complex, and we don’t completely understand what is happening, but it is playing a major role,” Munif said.