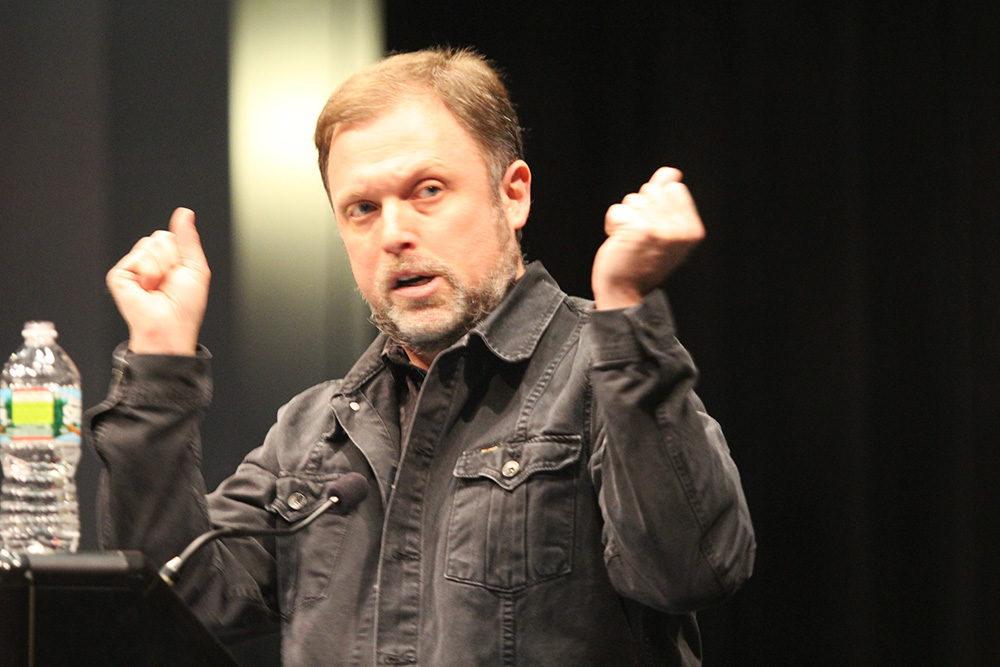 Tim Wise speaks with the occasional lyricism of a spoken word poet. He does so quickly, running ideas in circles around each other and pausing for the odd sip of water.

On Monday, an audience of around 170 Emerson students and faculty laughed at his jokes and murmured in response to his ideas about racism. When Wise was finished with his lecture, the attendees stood in applause.

The event in the Semel Theater was mainly comprised of a speech from Wise, a white anti-racist activist and writer. His talk was followed by a question-and-answer session and a reception where Wise signed copies of his book Dear White America: Letter to a New Minority.

Wise’s lecture covered a variety of topics, such as 9/11, the death penalty, and America’s education system.

At one point, in response to race-related crimes following the recent Boston Marathon bombings, Wise read aloud a list of 104 names of white Christians involved with terrorist attacks in America.

“We have a double standard,” Wise, 44, said. “We don’t racially or religiously profile white Christians. We don’t accost or accuse them of being involved in Oklahoma City or anti-abortion attacks.”

Ashley Bouchahine, a senior writing, literature, and publishing major, said she found this part of the talk particularly interesting.

“I really liked it,” she said of the lecture as a whole. “It put together a lot of things that have been troubling me over the past few weeks and months. It was really inspiring.”

The program was organized by the Multicultural Student Affairs and GLBTQ Resources, Diversity and Inclusion, and Student Life offices.

Vice President of Diversity and Inclusion Sylvia Spears said the event was held in response to recent incidents on Emerson’s campus, including race-related graffiti and an op-ed published by Isis Magazine questioning racism at Emerson.

“We decided that there needed to be some venue for discussion, some opportunity for students, faculty, and staff to engage in the issues at a higher level,” Spears said. “And Tim Wise is very good at doing that.”

Spears said while this was the original intent in scheduling the lecture, the events at the Boston Marathon changed the perspective of the speech. According to Spears, Wise contacted the office over the weekend about shifting his focus.

“[The events of last week] make it impossible to proceed as if history did not happen,” Wise said at the beginning of his talk.

Wise then said he acted with trepidation regarding what he would speak about.

“If I say anything that might be seen as insensitive,” Wise said, “you should know these are important things we have to add to that narration [about the bombings].”

“Tim Wise is always provocative,” Spears said. “That provocative nature is exactly what education should be. You don’t have to agree with everything he says, but it’s important you have an opportunity to think about what he says.”