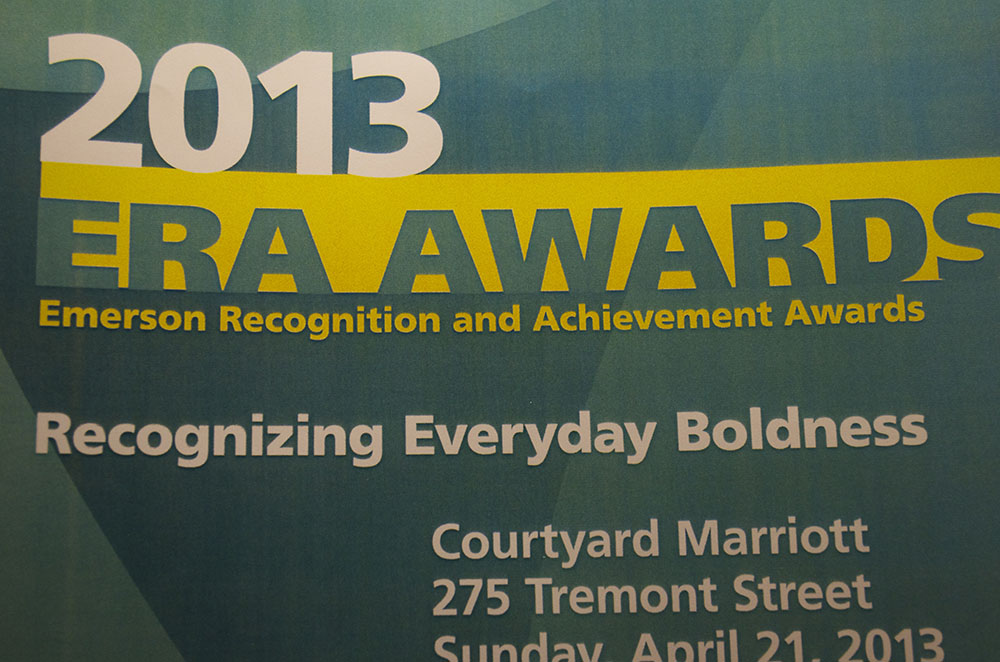 After a large campaign to raise awareness about Emerson Recognition and Achievement Award nominations, this year’s ERA Awards will prove to be a larger exhibition of student work and accomplishment than in years past, according to Jason Meier, director of student activities.

An established Emerson tradition since the first event in 1986, the 28th ERA Awards will be held this Sunday at the Courtyard Marriott. The event, which is sponsored by Student Activities, is the official Emerson college salute to leadership involvement and civic engagement, according to Meier.

“It’s for the student leaders and student organizations and advisors, to honor them and the hard work that they’ve done all year long,” Meier said.

This year, there were 158 nominations for 11 awards, according to Meier, including Emersonian of the Year, Advisor of the Year, and Student Leader of the Year.

“We were very happy with the breadth of students and organizations nominated,” he said. “It was a really tough choice for a lot of the groups in selecting someone because we had such stellar nominations this year, and we hope that trend continues.”

“Those processes are all a little different, but what is important and what matters is that students nominate each other for these awards regardless of who selects them,” Meier said.

Though the ERA Awards have occurred annually for the past 27 years, what sets this year apart from the past, according to Meier, is the scope of the nominations.

“I feel like the committee promoted the nomination effort really strongly this year, and really reached out to every student group as opposed to just their friends,” he said. “They made an effort to include as many people in the community as possible.”

Meier said this effort included being more intentional in promoting the nominations to all organizations and students, and creating the Name-Your-Own-Award Award. For this accolade, students were given the chance to nominate someone for an award of their own design.

The event is open to students, staff, and faculty, and begins with a reception before dinner to thank advisors and presidents of Emerson organizations. Dinner is served at 6 p.m., followed by the awards ceremony at 7 p.m. Tickets cost $5.

According to the Emerson website, the celebration not only recognizes leadership, but also gives student organizations the opportunity to pass on the reins. Along these lines, Meier said that there tends to be a trend of freshman students attending to find out about various organizations and their goals.

“It’s a good barometer for what student organizations are out there doing really cool things, and I think students aspire to be one of the 100-plus leaders crossing the stage,” Meier said. “It’s a cool thing for them.”