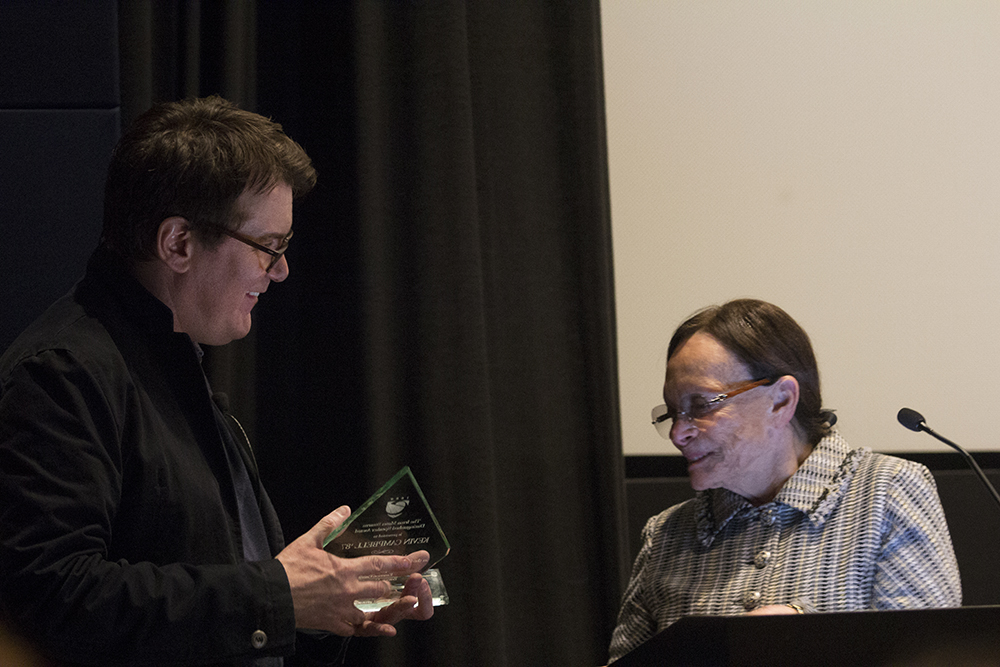 Kevin Campbell, a 1987 Emerson graduate, has made a career out of understanding the psychology of his audiences. The executive vice president of marketing at Walt Disney Studios, Campbell analyzes all aspects of the films he works on.

“When you have a great movie, you want people to see it. But sometimes if it’s not positioned properly or it’s not marketed correctly, people don’t see it, and that’s a shame,” said Campbell in an interview. “It’s our job to identify what part of the movie is going to resonate most with the folks at home and then to amplify it and find a way to emotionally show them why this is something they should care about.”

On Tuesday, Campbell returned to his alma mater to accept Emerson’s Irma Mann Distinguished Speaker Award, and shared his accomplishments and advice with current students in the Bright Family Screening Room. He presented the audience, comprised of around 180 attendees, with a campaign he created for Lincoln.

During his speech, Campbell discussed the importance of finding an iconic image for the Lincoln movie poster, the release date, and using current events to fuel the fire around the movie, such as the 2012 presidential election.

“It was crazy realizing that the release date of the movie was the most important detail in making the movie a success,” Blessis said. “Instead of releasing the movie after the presidential election, they decided to release it before, and it turns out that really helped them because rather than being drowned out by the election, the movie used that momentum to get people excited to see it.”

Campbell also showed the audience the evolution of marketing a movie by screening several different trailers that were released for the film at different times. He explained how continually changing the trailer retains the audiences’ attention.

As a former Emerson student, Campbell explained how his education served him in the industry, and told students that hailing from the college helps when looking to head to Hollywood.

“Emerson creates this little world where you feel you have the freedom to be whoever you want to be, and it is important to try and not lose sight of that as you enter the profession,” he said in an interview.

Campbell has served as the executive vice president of marketing for 20th Century Fox, working on motion pictures such as The Devil Wears Prada and X-Men. He also spent time at Universal Pictures early in his career, creating marketing strategies for Meet the Fockers, A Beautiful Mind, and Bruce Almighty. He has also been a member of the Academy of Motion Pictures Arts and Sciences since 2007. Campbell said he is currently working on a movie called The Delivery Man, a comedy starring Vince Vaughn

“Emerson students have a really great reputation in the entertainment community as being hardworking, honest, creative people,” said Campbell in an interview. “I think that Emerson nurtured a creative spirit that has served me really well, where there were no boundaries and there were no limits to what you could think about, or achieve, or do. I think those qualities serve you well in business, knowing that anything is possible.”

While the West Coast has been home to Campbell, he said coming back to Emerson incited a bit of nostalgia.

“It’s actually really rewarding to see [that] while the buildings have changed, the spirit that this school had in 1987 when I was here is clearly still here,” said Campbell. “That’s in the hearts and the minds of the students; it is pretty great that it has survived all these years.”