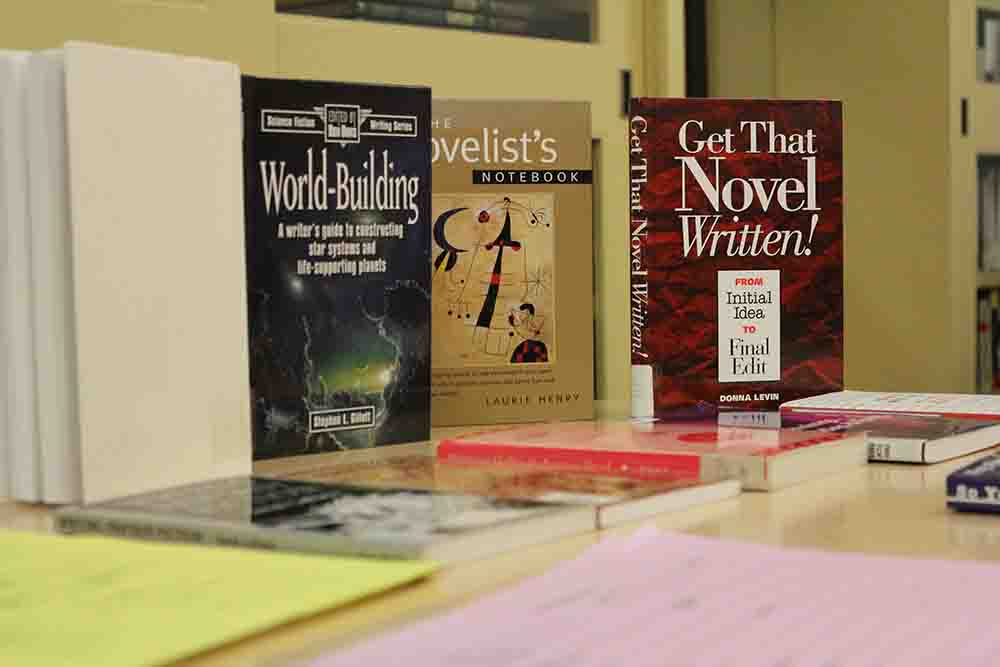 Keyboards are clacking all through these November nights as writers race to complete National Novel Writing Month, affectionately known as NaNoWriMo. With bloodshot eyes and blank stares, the would-be novelists tally their word counts in hopes of proving their devotion and discipline to the craft.

NaNoWriMo, hosted annually in November, challenges prospective novelists to write 50,000 words within one month. On NaNoWriMo’s online platform, the writers can track their progress, compare themselves to other participants throughout the country, and connect and commiserate over writer’s block.

Some Emerson students are participating in NaNoWriMo this year, and they said it takes a lot of late nights and hard work to write a novel with such time constraints. Claire Torres, a freshman writing, literature, and publishing major, said she is participating for her third time. She said she has met the 50,000 word mark twice before, and at the time of her interview, was a little behind schedule with 22,000 words.

Torres said the month is a great motivator for perpetually blocked writers.

The math comes down to about 1,667 words a day for a month, or about seven pages, double spaced, in size 12 font. Torres said she averages about 500 words per day during the week, then uses the weekend to catch up, cranking out 3,000 to 4,000 words a day.

“When I started [the first year] I thought it would be cool, while now I have to finish to beat myself again,” Torres said. “It’s a little too late to stop now.”

Paige Cober, a freshman writing, literature, and publishing major, said she is trying NaNoWriMo for her fifth year in a row. This time, she said she is writing a dystopian novel. She said she has finished successfully twice before, and isn’t as worried about the final word count as she was in years past.

Cober said whenever she sits down to write, which she said is usually very late at night, she makes sure she has coffee, a blanket, and no distractions on her computer. She attributed her past successes to a smaller workload in high school, and a strict dedication to her daily word count.

She also said that the cathartic, fast-paced writing that NaNoWriMo encourages is good for more than just getting words onto the page and beating writer’s block. She said that it usually takes her four hours to write 1,667 words.

“[In years past] my writing got better toward the end of the month,” Cober said.

Christina Dent, an Emerson instructional librarian, has hosted two write-ins, a time dedicated for students to come together in a quiet space and type their fingers to the bone. Dent said the first write-in was held in the Iwasaki Library Nov. 7, and the second was held in Walker 639, the Phi Alpha Tau Reading Room, Nov. 14. Though Torres was the only NaNoWriMo participant to show up for the second workshop, Dent said there would be another write-in Nov. 22.

Tristan Donaldson, a freshman visual and media arts major, and first-time NaNoWriMo participant, said he heard about the write-in, but opted not to attend.

“I’d rather write in my room where I can control the environment,” he said.

Most of the people he knew taking part in NaNoWriMo had dropped out, Donaldson said. He said he was surprised to find himself as one of the leading writers among his friend group. To keep on schedule, he said he sets a goal of 2,000 words a day, and refuses to settle for less.

“I break [my writing] up into two sessions,” he said. “I come home from class, write, take a dinner break, then come back and write some more.”

It takes him two to two and a half hours to reach his 2,000 word goal, Donaldson said. He said he finds an artist on the music website Grooveshark, hits “play all,” and doesn’t touch his music selection while writing to cut down on distractions.

He said he has tried multiple times before to write a novel, but has always failed. Like Cober, he said the pressure of NaNoWriMo motivates him.

When describing the novel he is currently working on, Donaldson said it followed the struggles of a destitute alcoholic living in the Catskill Mountains. He said his story is nothing like the film Into the Wild, despite the summary similarities. Because of the mains character’s struggle to find food, Donaldson said he often writes better when he is hungry.

“A lot of the book is just me describing the things he eats, like raw fish,” Donaldson said, laughing. “You know, like the fish’s salty blood never tasted so good.”

Donaldson said he has high hopes for his novel, and wants to publish it once he’s finished. For any NaNoWriMo newbies, Cober had one piece of advice.