Potential pledges get a taste for Greek life 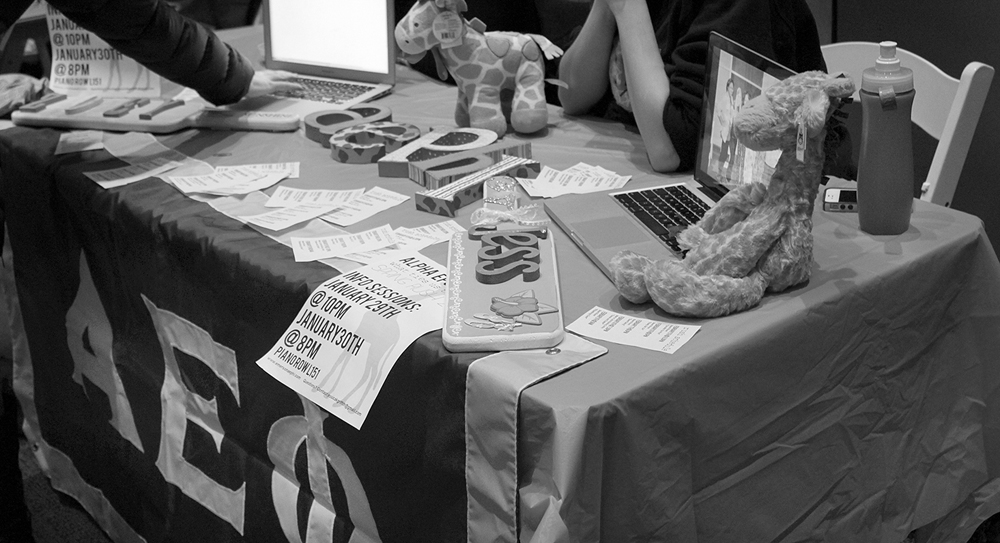 Though she had previously been hesitant to join a sorority because of stories and stigmas that spoke against Greek life, Alicia Gervin, a sophomore visual and media arts major, suddenly found herself caught between choosing to pledge Sigma or Kappa.

At the Greek Life Open House held in the Bill Bordy Theater Tuesday, all seven Emerson Greek lettered organizations came together not only to draw new members in, but also to bring current members together. The event provided an avenue for interested students to get information about Greek recruitment, costs, and requirements.

Gervin said that the most enlightening moment of the night was when members from the seven different Greek organizations took a few minutes to give their 2 cents about what their group is all about.

“It’s been really nice because everyone is just really welcoming and wants you to be involved in what they’re doing,” Gervin said.

President of Sigma Pi Theta Anne Whitehead said that the event was exciting for both recruitment and unification.

“It’s really great because it’s the one event that really brings all the Greeks together,” the junior writing, literature, and publishing major said. “We have other times where we get to hang out but it’s really great because we all support each other, and it’s like a big, big family — not just separated sororities and fraternities.”

According to Whitehead, her sorority Sigma Pi Theta is a local, social alliance with no other chapters outside Emerson. Their philanthropic focus is fighting breast cancer, as one of their founders was a two-time survivor.

For a sorority that is looking to bring in new pledges as it steadily expands, Whitehead said events like the Greek Life Open House are especially exciting.

“We love recruitment,” she said. “It’s our favorite time of the year. You never know who’s going to come out, even your friends may show up, and you’ll be like, ‘I didn’t know you were interested in Greek Life.’”

During the opening informal speeches, Whitehead said the room was full with potential pledges. As the night grew on, the room thinned out, leaving the Greeks to chat amongst themselves and have conversations with the remaining potential members.

“The stigmas that I had previously believed were formed by hearing stories of older friend’s experiences who went to other schools that had a larger Greek life atmosphere where the majority of the student body was heavily involved,” Gervin said. “I can’t deny that other forms of media and movies also contributed to the stigma I had created in my mind about Greek life.”

Freshman visual and media arts major Blake Zimring said that such stereotypes are the reason he won’t be pledging a fraternity at Emerson.

“I think its unfortunately become a scapegoat for people who are trying to gain instantaneous social acceptance,” Zimring said. “I think because its such a depended upon outlet, it inherently is going to start crippling the collegiate experiences of some of the members who join solely for the social reasons, because they’re not actually pursuing stuff that’s of interest of them. They’re doing it to fit in with the crowd. It’s conformity.”

Alternatively, Gervin said that she found herself feeling stuck in the organizations she had joined her freshman year, and she was looking for a new way to branch out. After attending the Greek Life Open House, she found that her worries were unnecessary.

“After getting a taste of Emerson’s Greek life, that stigma completely shattered, and I realized it is really just about forming a sense of community.”

After attending the Greek Life Open House, Gervin said she was seriously considering joining a sorority. Caught between two different options, she said that although it seemed cheesy, she would probably end up writing up a pro-con list to choose between the two.

“I’m really, really torn between Sigma and Kappa right now,” she said. “They both seem great, so it’s really hard to pick one. I might just go to both of their events and see what happens.”