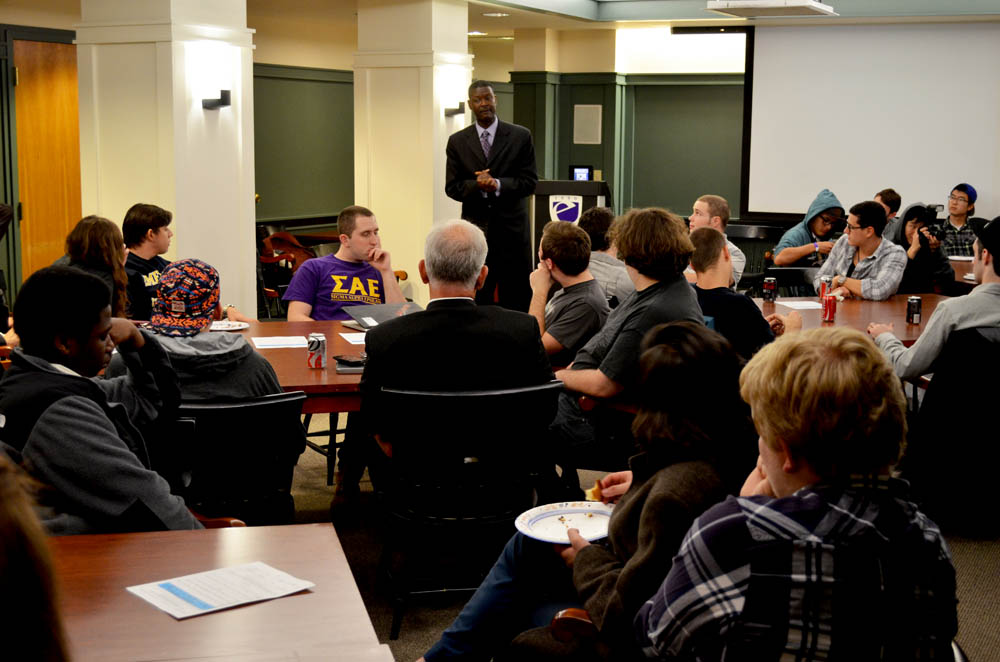 Emerson’s branch of the fraternity Sigma Alpha Epsilon (SAE), hosted a fundraising event last Thursday to officially kick off the start of ‘Movember.”

Every November since 2003, the Movember Foundation has challenged men and women alike to stop shaving to raise awareness and funds for men’s health groups, like the Prostate Cancer Foundation or the LIVESTRONG Foundation. Movember aims to bring attention to health problems such as prostate and testicular cancer, according to the organization’s website.

According to the fraternity, this is the first time SAE has decided to participate in Movember, and they currently planning more events.

“Breast cancer is something we know about, but not a lot of people know that men’s health is a thing, too,” said Cahill. “It’s kind of swept under the rug.”

Philip Trampe, the first guest speaker of the kickoff event and a member of SAE, said he first found out about Movember when he went on a trip to Canada last year.

He said he learned that men all over the world have pledged to put their razors down this month and find sponsors to donate money to Movember. Participants, nicknamed “Mo Bros,” raised $126.3 million last year, according to the organization’s website.

Women can cease shaving to support this cause as “Mo Sistas.”

After he returned from his trip, Trampe said he presented the idea of bringing Movember to SAE’s philanthropy chair, Zach Ellman.

Immediately SAE caught Movember fever and began thinking about how the fraternity could get involved. Members have been planning since the beginning of the year, according to Ellman.

Since the foundation started nine years ago, Movember has grown into a global movement, inspiring more than 1.9 million people to participate, according to the Movember website.

This month-long event should not be confused with the similarly-themed No Shave November. The No Shave November Facebook group defines the occurence as dedicated to “the art of not shaving during the month of November.”

The SAE fraternity has been working closely with Student Life and The Center for Health and Wellness to make this fundraiser possible. Sponsors like Boloco, New York Pizza, and Boston Common Coffee Company all showed their support for SAE’s cause by providing food for the 42 people who showed up at the event, according to Cahill.

Ellman explained the reaction he got from the rest of the brothers when he decided how he was going to bring Movember to Emerson.

“I’ve had a lot of support from my brothers, and they are really helping me with this,” Ellman said. “We all meet once a week as a fraternity. Just staying in contact with them as days go has really helped prepare us for this.”

Cahill and the other members of SAE are participating in Movember to let males  on the Emerson campus know that talking about men’s health issues doesn’t have to be difficult.

“You can still walk with a hand on your belt buckle, with a cowboy hat on, and go kick ass,” said Cahill. “You can still do all those things and go get checked up.”