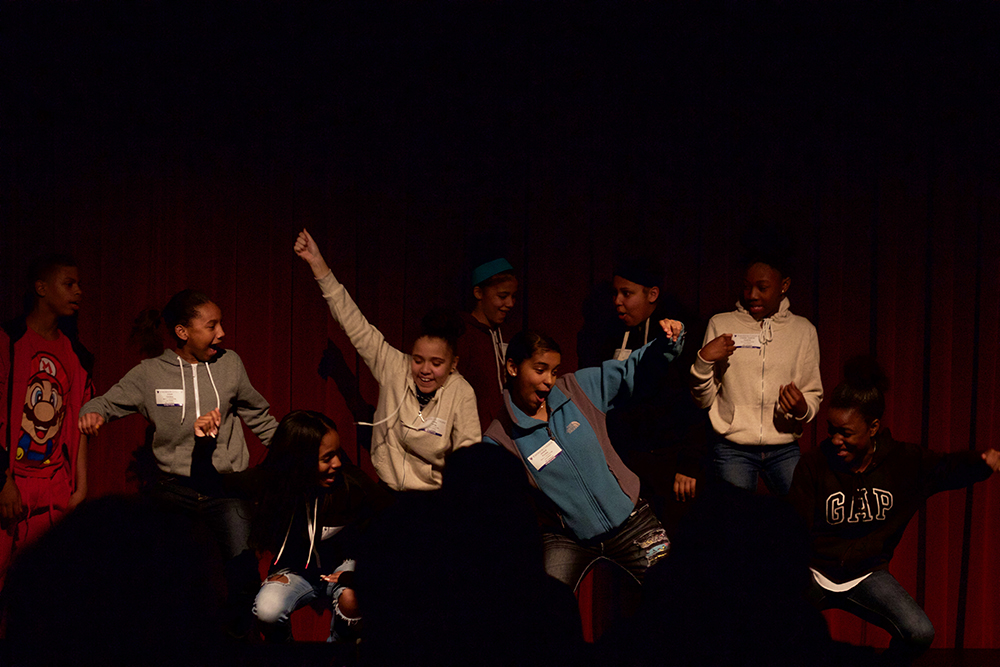 Nearly 50 years ago, a quote from presidential candidate Robert Kennedy was memorialized in black and white. Today, the words speak in living color.

On a clear Wednesday afternoon, sunbeams and students flit through the air in an office on the eighth floor of the Walker Building. The office belongs to Gregory Payne, chair of the communication studies department, and on one of his walls, there’s a 1968 campaign poster that reads “the youth of our nation are the clearest mirror of our performance.”

A decade after the poster was made, the Bird Street Community Center of Dorchester opened its doors as a non-profit youth center with a mission to instill intellectual, communication, and leadership skills in at-risk children and young adults, primarily serving students of color. It serves more than 1,300 of Boston’s students from Dorchester, Roxbury, Mattapan, Hyde Park, and Jamaica Plain.

After the 2012 Newtown shootings, President M. Lee Pelton instructed faculty and staff to engage students in dialogue surrounding issues of violence. Payne said he decided to take Pelton’s advice further by forming a partnership between Emerson and Bird Street.

“We discussed in my Argument and Advocacy class that in order to really make a difference, we need to get out into the real world,” Payne said. “So I talked to a colleague of mine, Neil Harris, who is one of the few men of color involved in Boston Public Schools. I said, ‘I’d like to have some of my students go down and get to know some of your students at Bird Street.’”

Neil Harris is a program director at the Bird Street. Harris teaches a social media class there, which allows students to engage in discourse surrounding current events using effective communication skills. The director said his students need a strong learning foundation to be successful.

“We thought it would be great to get the kids at the community center an opportunity to come over to an institution like Emerson and build relationships with the students here who could offer some mentorship,” Harris said. “Unfortunately, Bird Street students grow up in an at-risk atmosphere where things are not consistent.”

“Bird Street students are learning a lot, but the Emerson students are taking away just as much if not more,” Payne said. “Although we are tempted to be more and more diverse, we still have a group that operates from some degree of privilege. I don’t think a lot of students at Emerson understand the challenges that kids at Bird Street face each and every day.”

This year, under the direction of freshman communication studies major Josiah Seet, the Bird Street students have taken their skills to the stage.

“For us, it’s all about being facilitators for whatever they want to do and empowering them to do just that,” Seet said. “I think getting people involved in something like this is different than what we a lot of times end up doing, which is just talking.”

Randy Boston, a 19-year-old Bird Street student and one of the 25 performers, opened the show by telling the story of a shooting he witnessed on a regular night out with friends. Boston said he is not the same person he was when he first started going to the community center eight years ago.

“Bird Street changed my mindset from that of a stereotypical urban kid in the hood who isn’t going to be successful to that of a well-rounded individual,” Boston said. “Emerson took that knowledge to a college level.”

Boston is now a student ambassador at the Bird Street Community Center, and said that one day he aspires to be the President of the United States.

“Anywhere I go, even if I’m quiet, people still look up to me as a leader,” Boston said. “It gives me a chance to take what I’ve learned from life, Bird Street, and Emerson and apply it to the people who are giving me the chance to give them that knowledge. If I’m able to do that, it makes me a better person.”

Although they haven’t arranged a meeting with President Barack Obama yet, students at the community center have spent some time with Pelton. Djamilson Daveiga, a 17-year-old Bird Street student, said he did not expect to see a person of color in Pelton’s position.

“I expected to see an older, white man,” Daveiga said. “When we saw him it was kind of comforting. He shook our hands, talked to us, and we were able to get to know him. We started realizing who he really is and what Emerson means to him.”

Daveiga, who said he has been at Bird Street for five years, rapped about his experiences with oppression as a young black man.

“When we are at Emerson, we have a lot of conversations about inequality, especially in different neighborhoods,” Daveiga said. “So when we started talking about shootings and controversy, it was interesting to think about the way we actually go through things versus the way people see what we go through.”

Beyond the stage, a film crew of six students worked to capture every moment of the rehearsal process and the performance. Freshman visual and media arts major Kyra Power worked closely with the students as the director of a social justice documentary outlining the Bird Street and Emerson partnership. Powers said she plans on submitting the documentary to the EVVYs.

“It’s about how the Bird Street students used communications skills to create this event and learn from this event,” Power said. “It’s a been really cool experience because they have opened up a lot.”

Madison Martinez, a freshman marketing communication major, worked with the Bird Street students to create posters and a Facebook page for the event. Martinez said that she plans on getting more Emerson students involved with the community center in the future.

“There is something powerful that happens when you are able to actively engage and share your experiences with others, Martinez said. “I think that’s why the talent show is so brilliant.”

Payne said he wishes to see more activities like the Bird Street and Emerson partnership present on campus.

“It’s one thing to read a book or have a discussion with people like you,” Payne said. “But, if you are truly engaging in the community the way that this project is doing, it can be a remarkable learning experience for both sides.”