Just can't wait to be mascot: Rogue lion has an Emerson approach to school spirit 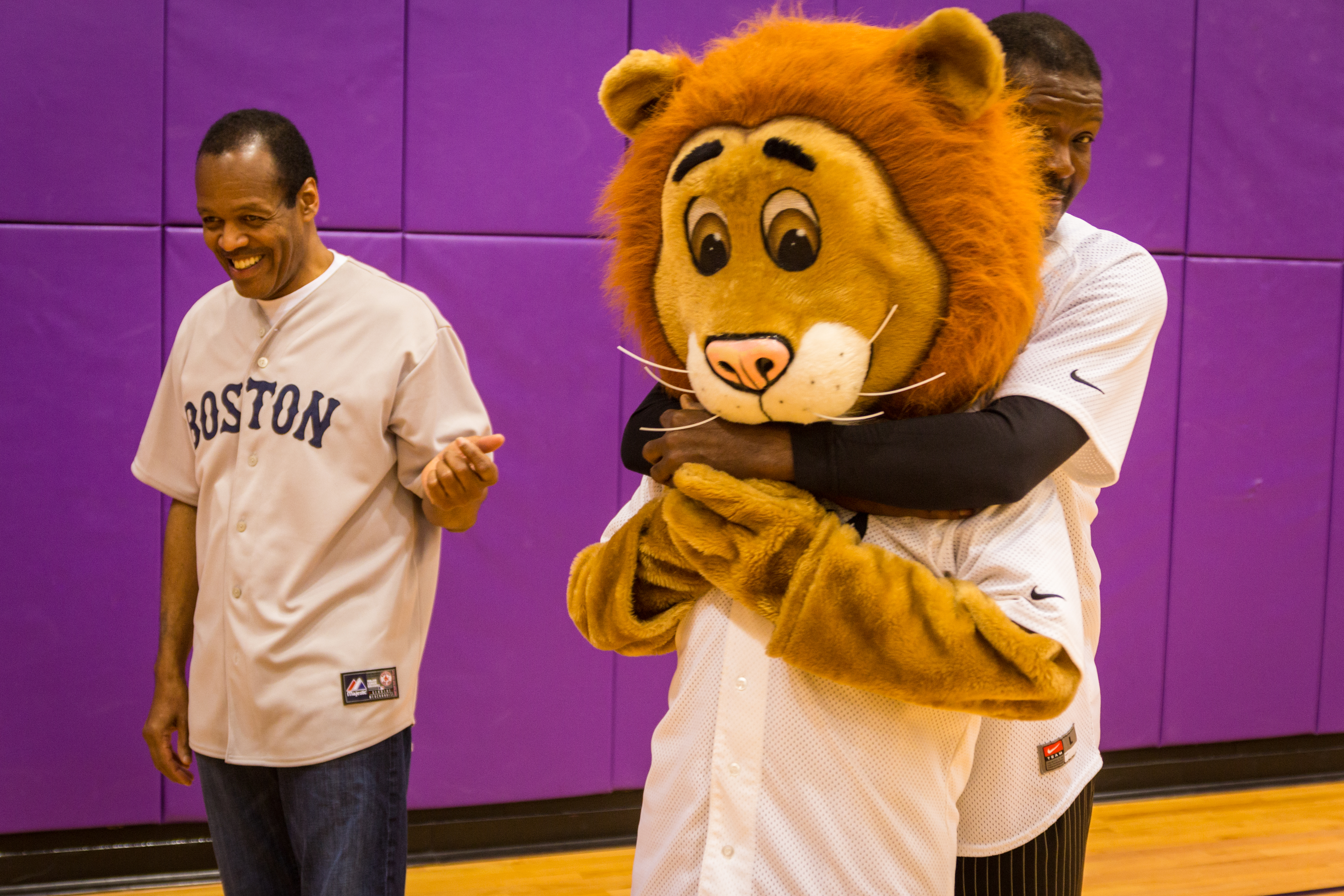 Last November, Emerson’s women’s basketball team found itself with a reliable and passionate new fan: A lion mascot, going by the name Griff, had consistently begun appearing in the Bobbi Brown and Steven Plofker Gym.

“He would literally be at our game while we were warming up and stretching when no one else was there,” said Shannon Norton, a former Emerson basketball player who graduated last spring.

“I remember one time on the court we were just shooting around he kind of jumped on the court and I let him play defense on me. It was pretty funny,” she said. “He would literally be there from start to finish before anyone else showed up and leave after everyone else left.”

When he originally starting prowling around the lower levels of Piano Row, the man in the Griff the Lion suit was not an official Emerson College agent. A student had purchased the costume with his personal funds, donning the name Griff after the Griffin stance of the lion in the logos around campus. He first showed up at women’s volleyball games, and his frequent appearances at Emerson games quickly inspired curiosity from athletes.

“When I started it everyone was like, ‘Hey, there’s a mascot. Like, when did that happen?’” said the man behind the mane. He prefers to remain anonymous because, he says, mascots have to remain anonymous to keep the sanctity of mascots alive — no one should know who’s inside the suit.

He was inspired to buy the suit after visiting his twin brother, who performed as the buffalo mascot at University of Colorado, Boulder. After seeing the enthusiasm that his brother’s antics inspired, he decided Emerson needed something similar. A student-athlete, he used his new suit to correct the lack of spirit he sometimes found at Emerson games.

Describing Emerson as an abnormal college experience, Griff’s alter-ego said athletics is not at the forefront at Emerson, despite promotion from some administrators, a sentiment also expressed by Norton.

“With sports there wasn’t much [school spirit] because a lot of the kids don’t even know what sports are,” said Norton.

So the student took it upon himself to get an actual, physical costume to legitimize Emerson’s court sports. Without any kind of request from the college, Griff the Lion attended games from the first whistle to the final play.

He maintained his anonymity by going into the gym early, getting into costume, staying there for the whole game, and then changing back and leaving quickly.

The creature’s paw print reached beyond the court, too: He created his own account on Facebook, which was used to share photos and inspirational messages — though the account has been inactive since April 19, five days before the last Emerson varsity competition of the spring.

Emerson College began paying him to appear at games in the fall, he said. The school bought the suit from him after the school year ended for the same price that he had paid, a cost he preferred not to share. Since then, the suit has taken on new duties.

“And I know now, I saw a picture of them using it during orientation,” said the suit’s original owner. “This girl I know asked me how she could get the suit for a sorority event. I’ve seen it being used in other things besides sports.”

Griff’s story fits Emerson students’ oft-unconventional way of expressing their compassion for the school and support for the community. The largest signs of school spirit at Emerson tend  to stray a bit from the usual college experience, with Orientation Leaders, the EVVYs, and lip dubs often generating more excitement than the college’s 14 varsity sports.

“I think of it more as expressing the Emerson community personality than I think of it as ‘spirit’ in a sense,” said Tiedemann. He said he first noticed Emerson’s unorthodox approach before he even began working here. “It’s hard to put in words exactly but I came to an open house and the students were incredibly outgoing and friendly and the staff was the same. There’s just this Emerson kind of personality, it’s hard for me to exactly put my finger on it. And then when I started working here it’s the same thing.”

Cooper and Tiedemann approached President M. Lee Pelton this summer about creating a project to portray what Emerson is to people who haven’t experienced it. In a related project with similar goals, the college is also considering rebranding its website.

Cooper, the architect of the Spirit of Emerson initiative, has worked at Emerson for over 30 years, and said he has always been impressed with the quality of the faculty and student body. Cooper and Tiedemann said they hope to inspire and support the community by creating a list of ways to encourage Emersonian culture.

These could include activities like attending an Emerson theater production, going to a sporting event you’ve never been to before, or maybe even becoming an anonymous mascot for basketball games — the man who bought the suit encourages it.

Due to an editing error, Shannon Norton's named was misstated in a previous version of this piece.