Foundation on the Margins: Liberal arts profs try to offer value at a specialized school 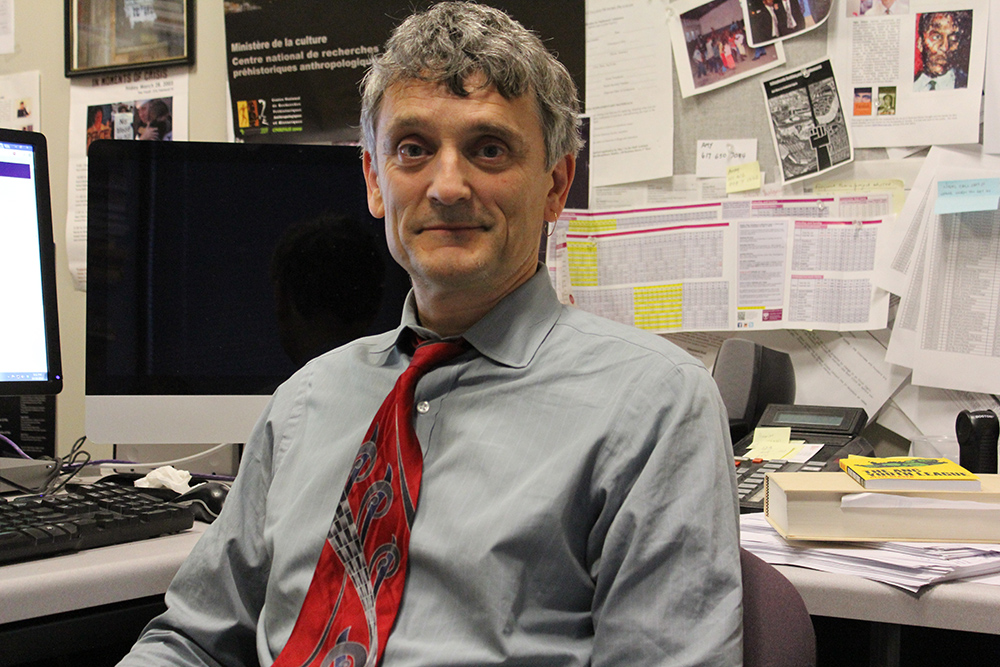 Jon Honea does not have the type of office you might expect for a professor in Emerson’s communication sciences and disorders department. Books about audiology, speech pathology, and sign language are absent—instead, the most prominent feature is a giant surveyor’s map of Andover, Mass.

Although Honea is a scientist, he doesn’t study how humans communicate. He’s an environmental researcher whose doctorate from the University of Washington is in ecosystem analysis, and who, in his latest project, is trying to predict how removing dams in Andover will affect herring populations.

Honea is one of over 20 liberal arts professors at Emerson, teachers whose courses don’t neatly fit into one of the college’s principal pre-professional fields. These are professors who are more than qualified to teach at major research universities, where they would be surrounded by colleagues at the forefront of their domains and students who want to major in their disciplines—indeed, most had stints at such institutions before coming to Emerson.

“At first, I was really apprehensive about teaching here,” said Honea, “because I thought my field was what they came to Emerson to avoid.”

Yet Honea and other professors who teach the liberal arts courses have stayed. Though many acknowledged that working at Emerson has certain trade-offs, they said they had come to appreciate the college’s distinct concentrations. And their shared belief in the liberal arts informs their teaching here. They hope to give students the skills to thrive in a changing, complex world—the same skills that have allowed them to work at a narrowly-focused institution like Emerson.

Ending Up at Emerson

In most cases, the reasons liberal arts professors come to Emerson are not so exotic. Some relocated to Boston for their families and needed to find jobs; others simply saw openings for teaching positions in their fields.

“This line of work is sort of a crapshoot in terms of where and when jobs open up,” said Wyatt Oswald, an environmental scientist and interim chair of the communication sciences and disorders department.

Oswald, whose research focuses on the effects of climate change, said he moved to Boston for family reasons, then took up a position at the Harvard Forest, a Harvard University research center for forest ecology and conservation. Around then, he said, Emerson happened to be looking for someone to teach general science classes, and he was hired in 2006.

“Frankly, I’d never heard of Emerson before,” said Oswald, “and didn’t have any real idea of how unique and focused the place was when I first applied.”

Nigel Gibson, director of Emerson’s honors program, also said he found his way to the college because of his family. After completing a doctorate in political science at Columbia University, Gibson became its assistant director of African studies. But a few years after his wife had their first child, Gibson said the couple wanted to relocate, and they found a new home in Providence, R.I.

Gibson said Emerson was looking for someone to teach what were then called “non-Western” classes, and got that position, starting at the college in 2000.

A similar push by administrators to expand the liberal arts offerings was what Nejem Raheem, the college’s first full-time—and currently only—economist, said brought him to Emerson in 2009. With an undergraduate degree from Bennington College is in theater, Raheem said he quickly found the college to be a good fit.

“There just aren’t a ton of economists with a theater background,” he said. “That, in a way, makes it easier for me to be here.”

Though the reasons liberal arts professors arrived at Emerson may be mundane, their reasons for staying are more often complicated. Although the liberal arts comprise a core part of Emerson’s stated mission—the college’s website says it is “focused on communication and the arts in a liberal arts context”—students and faculty alike pointed to a common view that these courses are something to get out of the way, not an essential part of learning.

“There’s sort of this marginalization of these classes,” said Gibson, “which on one hand are supposed to be core of the experience, and on the other hand, are sort of these marginal requirements.”

“I personally came here mostly for the creative aspect and the writing classes, so for me, [the liberal arts] was just something to check off,” she said. “Most people I know just want to get them over with.”

Some professors said they felt a sort of academic isolation. They miss being able to easily talk with researchers in the same field and hearing about the latest studies—opportunities they would have with a department devoted to their discipline. Instead, they have to make an extra effort to stay engaged, by, for example, reviewing articles for academic journals, working with external organizations, or attending conferences.

“It takes a lot more work to stay up on the cutting edge,” said Honea. “Before, you would just hear it in the hallways, or you would have coffee with somebody and learn about stuff that hasn’t even been published yet.”

More deeply, though, some professors said their fields—the areas of study they cared enough about to write doctoral dissertations—sometimes felt insignificant at Emerson. Raheem said that aspect, and being Emerson’s sole economist, might be the hardest parts about working at the college.

“You know what you do is really important, and you know it really matters, but nobody else really cares about it,” said Raheem. “They say they care about it, and maybe some of them do care, some of them do recognize it, but a lot of people don’t really care.”

Despite these sacrifices, some professors stay because they feel it is crucial for students at Emerson to have a liberal arts background. They said there are certain fundamental skills, like thinking critically, incorporating distinct perspectives, and solving complex problems that are best served by the broad scope and myriad subjects found in liberal arts courses.

“I always say, ‘You may know how to produce culture, but what are you going to put in it?’” said Claudia Casteñada, a senior scholar-in-residence at Emerson who received her doctorate from the interdisciplinary History of Consciousness program at the University of California, Santa Cruz.

Honea, whose undergraduate degree is in English literature, agreed that artists need to have more than just a technical training.

“This is going to sound sacrilegious, but they’re more important,” said Honea about the liberal arts. “Because all that stuff like how to hold a camera, that’s going to be obsolete probably even before you graduate. But learning how to think critically, learning how to analyze that vast amount of content you have at your fingertips, that’s never going to go away.”

Many liberal arts professors agreed, saying they see their jobs as laying the foundation to help students produce more thoughtful, complex work in their careers. They said that although some students are reluctant at first to engage in class—students who might only see their courses as requirements to get out of the way—most are open-minded enough to at least show an interest in the material. For some, it eventually pays off.

“I’ve had emails from people, alumni, just out of the blue,” said Gibson about messages that referenced subjects from his classes. “It had nothing to do with their major. I think that’s a lasting element of what liberal arts can do.”

Some students said they have already found ways to apply their liberal arts courses to their more technical training.

“I think it’s absolutely really important, actually getting a liberal arts education, because I feel that it makes you a more rounded individual,” said junior Jamie Ahlborn. “Being an acting major, anything dealing with human nature, and reasons looking into why people are the way they are, is really helpful for character work.”

Raheem, who worked as a theater director and managed his own production company for several years, said he believes creative, emotional perspectives and systematic, logical perspectives—found in fields like economics—aren’t contradictory. In a purely practical sense, he said, systematic thinking often only makes creative productions better, recalling advice from his directing professor at Bennington.

“He’d say, ‘Look, all the artistic vision in the world is not worth a goddamn thing if you can’t see the actors and you can’t hear them,’” Raheem said.

Liberal arts professors did say there were ways Emerson could better integrate their courses. Some said the departmental structure—which placed Honea and Oswald in communication sciences and disorders, Raheem in marketing communication, and Casteñada and Gibson in the Institute for Liberal Arts—seems arbitrary. Many also suggested Emerson should better inform students of the importance of liberal arts, and by doing so, make their courses seem more worthwhile than mere requirements to complete.

Amy Ansell, the dean of liberal arts, wrote in a statement to the Beacon that the school is working on strengthening its offerings in her department.

“We hear views from the whole spectrum—some want more of a focus on liberal arts, others less,” she said about students’ views. “There does seem to be a pattern of student response indicating the wish for increased rigor and challenge.”

But the professors’ dedication to teaching the skills they say liberal arts can provide seems to outweigh their concerns.

“Those kinds of critical understandings,” Casteñada said, “are critical to living, not just working.”