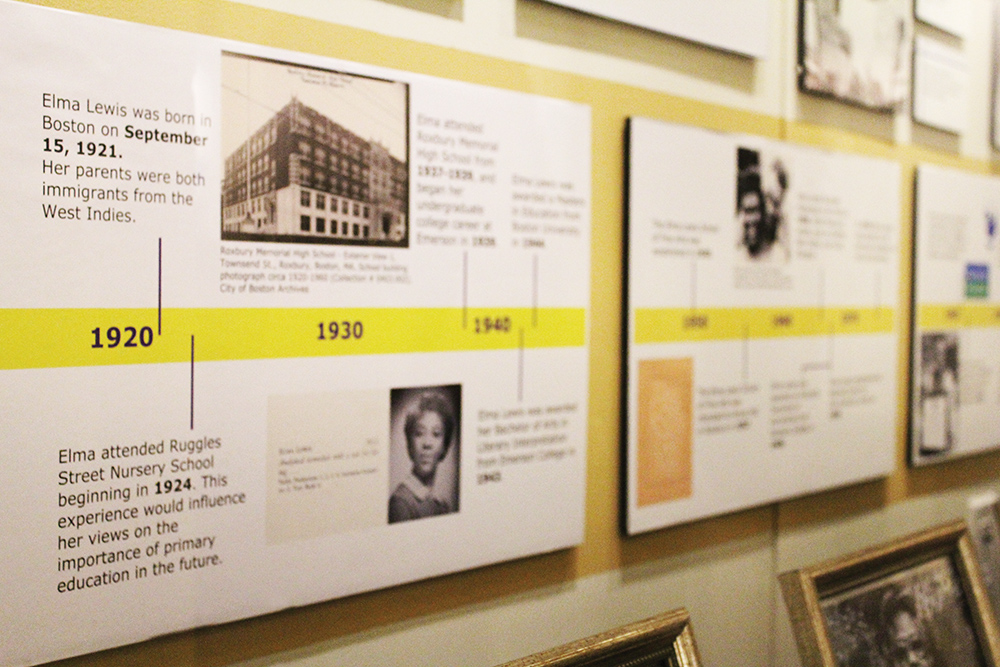 A collection of photographs, plaques, and certificates hangs in a newly filled glass case on the far wall of the Little Building’s lobby. At the center of the display is a photo of a woman with a serious expression — she stares intensely through a pair of wide-rimmed glasses, a bouffant hairdo atop her head.

The woman is Elma Lewis, the namesake of the college’s new civic engagement center and a 1943 Emerson graduate. In the featured picture, part of a diversity display new to the building this fall, Lewis, an African-American woman, holds a certificate representing the Presidential Medal of the Arts, presented to her by President Ronald Reagan in 1983.

Lewis’ impact is far-reaching — an arts activist and educator, she established African-American artistic centers and was a persistent presence in the Boston community until 2004, when she died in her Roxbury home at 82 from complications related diabetes, her obituary in The New York Times said.

She received 28 honorary doctorate degrees and was an active member of the National Association for the Advancement of Colored People and the Metropolitan Cultural Alliance, among other organizations. A list of her accomplishments, as outlined in a recent Emerson archives project, spans the length of four pages.

Her reputation and legacy set a high standard: As Emerson kickstarts The Elma Lewis Center for Civic Engagement, Learning, and Research this semester, the center’s heads will work to properly honor Lewis, said Kelly Bates, the recently appointed founding director. The center, originally announced in President M. Lee Pelton’s inaugural address in September 2012, will look to increase the college’s civic role within the Boston community.

A Life in Boston

Lewis grew up in Roxbury, a child of two immigrants from the West Indies. In public school, Lewis stood out — a preschool IQ test measured high. But teachers warned her parents that most African-Americans’ scores become lower as they get older, said a timeline compiled by the Emerson archives team. Her experiences with racism motivated her to open the Elma Lewis School of Fine Arts later in 1950, she said in an interview with The Boston Globe.

With the Roxbury academy, she sought to teach minority students about theater and the arts. The school operated until 1986 when it burnt down, the Emerson archives team found through its research.

Her strong-willed personality is something those who worked with her both knew and feared, said Theodore Life, a distinguished director-in-residence in the visual and media arts department. Life said he worked at the Elma Lewis School of Fine Arts while he was attending Tufts University in the late 1960s.

“You knew her,” said Life in a Beacon interview, “because even if you were doing your own thing, Miss Lewis was always sticking her head in.”

After she was awarded her first of two MacArthur Foundation Fellowships after her 60th birthday in 1981, Lewis was interviewed by Diana Korzenik, the chairwoman of the Art Education Department at the Massachusetts College of Art. The pair discussed her introduction to art — through her father, a poet. Lewis took to poetry and performance early, but said she was not a talented visual artist.

“In art class in school I would consider myself highly unsuccessful,” she told Korzenik. “My tour-de-force was music, was drama, was dance.”

But even as a child, Lewis knew what she wanted when it came to art. In the interview with Korzenik, she remembered a “tense moment” in one of her elementary school art classes. She had colored a tree with multiple shades of green, and her teacher said the image should only be one color.

“She was wrong. Oh no! I’ve never had a low opinion of what I thought,” she said in the interview. “I didn’t know why she wanted to spoil my picture.”

Life said what he remembers most about Lewis was her drive for excellence, and her unwillingness to accept anything below that quality from her staff. But her high standards for herself and others could wear on people, too. Life recalled an instance while he was working with Lewis and students on a play about Marcus Garvey — he couldn’t remember the title — when her demands caused directors and volunteers to run out of the theater, exhausted from the pressure.

“She would say, ‘Okay, then goodbye. I will find someone who can do this,’” said Life. “And she would.”

The trembling respect for Lewis extended to the city’s highest figures: The Boston Globe’s obituary of Lewis quoted former Boston Mayor Kevin White as saying, “Nothing caused me greater fright, really, than when my secretary would come in and say, ‘Mr. Mayor, Elma Lewis is outside.’ Of course, when Elma came in I’d jump up and say, ‘Good to see you, Elma.’”

But Life said he appreciated the high standards — he said he wishes Emerson would implement such high expectations in coursework, and hopes the new center will do the same.

“Something they don’t always teach you at Emerson is the importance of being on time, responsible, having no excuses, and getting a project done on time and on budget,” he said. “As long as the center is a place where excellence is the mantra in everything that it does, then I think you’re doing Miss Lewis proud.”

In Boston, Lewis also established Playhouse in the Park, a company that presents free performances from local artists on summer nights, and the National Center for Afro-American Artists, a Roxbury museum. Both are still running today. The projects, focused on African-Americans, stemmed from Lewis’ belief that struggling people create the best art.

“The only time art suffers is in times of affluence,” she said. “You take a trip to Europe; you might buy a boat. When you can’t buy a boat, you must sing a song. It’s essential for survival.”

Emerson junior Donovan Birch Jr., the president of EBONI, said the organization’s members hold Lewis in high esteem, and hope the college’s center does so as well. Lewis helped to establish EBONI — Emerson’s Black Organization with Natural Interests — in the 1960s.

“She goes right at the top of our leaders,” said the political communication major. “She embodied the use of art as a form of communication and civic engagement. She was a black leader and deserves the distinction.”

In her interview with Korzenik, Lewis reflected on her days at Emerson. While pursuing her degree in literary interpretation from the college, she would stroll on the Esplanade — or “the Espie,” as she called it — sipping sodas with her professors and friends.

Her Name Lives On

Her alma mater’s plans to honor Lewis haven’t thrilled everyone who knew her. Sarah-Ann Shaw, a Roxbury resident well known as Boston’s first African-American television reporter, said Lewis was her camp counselor. She later sat on the board at the fine arts school, and considered Lewis a close friend.

“She was a larger than life person,” said Shaw. “She was smart, she was creative, she was determined.”

But Shaw said that she feels the college didn’t meet with enough people who knew Lewis personally for the center to properly represent her friend’s legacy.

Bates, the center’s director, said she is continuing research on Lewis and strives to honor her appropriately. She said she has plans to meet with her family soon. Bates has been working to understand Lewis by completing research of her own, and speaking to people that worked with Lewis.

“She was a real firecracker,” said Bates. “She was no joke, you didn’t mess with her.”

The new department plans to foster discourse on social issues, develop advocacy and policy campaigns, and create community partnerships that will lead to service projects within the Boston area, said Bates. In keeping with Lewis’s mission, the center will work with the minority community throughout the city, said Bates, who is of African-American and Irish descent.

“In everything we do I want her spirit to be alive,” she said. “In my mind I think, ‘Would this meet her criteria?’”

Pelton, said in an interview he chose Lewis’s name for the center because of her accomplishment in Boston and across the nation. He first heard of Lewis in the ’70s when he lived in Boston, but never met her, he said.

“She was a real force of nature as they say,” said Pelton. “And she was just wonderfully committed to introducing young people from diverse socioeconomic and ethnic backgrounds to the transformative power of art.”