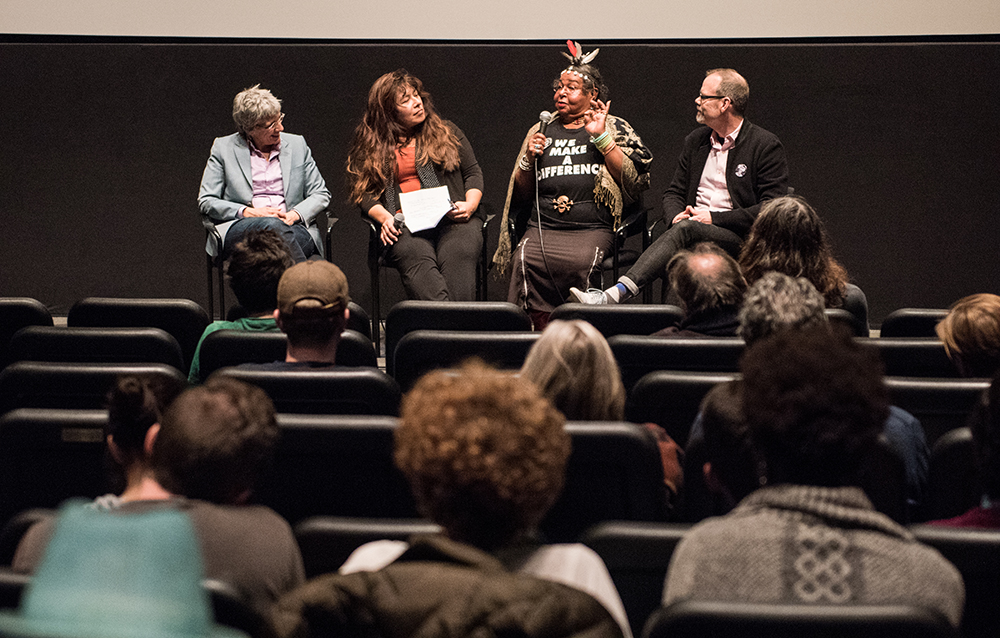 David France, the director of The Death and Life of Marsha P. Johnson, said the film’s production team developed a community outreach campaign to create free screenings of the film across the nation. Ninety of the 140 screenings were cancelled due to allegations against the director of using another filmmaker's archive without credit.

Anna Feder, the curator of the Bright Lights film series, screened the documentary to dozens of viewers Tuesday despite the film’s controversy.

“This is an opportunity to discuss the film, Marsha P. Johnson, and the allegations made,” Feder said. “I wouldn’t have screened it if the people who made the film weren’t going to be there to answer [for] it.”

The award-winning Netflix documentary is about Johnson, an African-American gay rights activist, drag queen, and prominent figure of the 1969 Stonewall Riots. It follows Victoria Cruz as she investigates Johnson’s 1992 death.

Transgender activist and African-American filmmaker Reina Gossett accused France, a queer cisgender white man, on Oct. 6 of stealing a decade’s worth of her research for her movie, Happy Birthday Marsha!

A Q&A followed the showing with France, Cruz, and L.A. Teodosio, one of the film’s producers. Feder said none of the guests were paid to speak at the showing. Speakers are not typically paid for appearing at Bright Lights screenings.

Feder said she first saw the documentary in June at the Provincetown International Film Festival and was unaware of the allegations when curating the Bright Lights series in July.

The accusations caught attention after Gossett posted on Instagram the same day the film appeared on Netflix.

“I started promoting on Facebook, saying I would screen the trailer and asking people to donate to her film,” Feder said. “That’s when I got the email saying, ‘Oh, we misunderstood. We would prefer you not show the trailer.’”

She said she asked them to inform her of the film’s completion so she could include it in the spring series, but she has yet to hear back.

“It was important to me to reach out to Reina [Gossett] or Reina’s production company and make that offer,” Feder said. “After all of the allegations, I’m in the mind that we need as many stories about Marsha and Sylvia [Rivera] and Victoria [Cruz] as we can possibly get.”

Two promotional sponsors, The Network/La Red and the Massachusetts Transgender Political Coalition (MTPC), pulled their sponsorship of the Bright Lights screening in light of the allegations.

JP Delgado Galdamez, an outreach and education associate of The Network/La Red, said the organization declined sponsoring or showing community screenings after speaking to trans women of color and community members in support of Gossett.

An email sent to Feder and signed by 12 The Network/La Red staff members stated: “We believe that David France’s presence at the screening gives him a platform to continue to defend his actions…David France’s attendance of the screening continues to center white cisgender folk instead of centering transgender people of color, which should be the goal of this event and similar events.”

Mason J. Dunn, the executive director of the MTPC, said although they were aware the allegations were inconclusive, the MTPC gives the weight of the situation to trans people of color when accounting the oppression they face.

“If a trans person of color says that they have been wronged and the community is backing them up, then it is my job to back them up as well,” Dunn said.

Emerson’s Alliance for Gays, Lesbians, and Everyone was one of the event’s sponsors. James Manley, a sophomore visual and media arts major and co-digital communications director of EAGLE, said the organization chose to promote the documentary because the film features a prominent LGBTQ activist.

“As long as [France] acknowledges the allegations constructively, there shouldn’t be a problem,” Manley said.

Chris Henderson, co-president of EAGLE, said the organization decided to continue sponsoring the event after learning Feder had reached out to Gossett.

“They were trying to hear both sides,” Henderson said. “Had [Feder] not done that, we would’ve been more tentative, but it still would have been okay since the information has relevance to queer culture.”

Feder said she had worked with the MTPC before and respected both organization’s decisions. She said she received no direct complaints but acknowledged three posts on the Facebook event.

K. Martinez said they had mixed feelings attending the screening as a gender nonconforming person of color.

They said they saw the documentary three times, once before the allegations. They said they were drawn to the film because there are few stories about queer people of color and their history.

“I got to see Marsha P. Johnson in this way that I had never seen them before, speaking about themselves and being inside the movement and not people speaking about them,” Martinez said. “I just knew that [the footage] had to come from [Gossett], you can kind of tell. The love and care that someone puts into a home cooked meal instead of a generic thing.”

During the Q&A, France said he disagreed that there may be stories some people cannot touch.

“It’s my obligation to reach across cultural divides to tell stories about other people,” France said, “and to try to check my own bias and privilege in order to do that.”

In an interview, France said he proved his sources in a Jezebel article, where a statement from Lesbians Organized for Video Experience (L.O.V.E.) Collective said France acquired licensing for footage which Gossett uploaded without owning legal rights.

He said the production has a 1,500 page document of sources and that they had to submit the licensing documents to attorneys, but he did not want to post it on social media in response to Gossett.

During the Q&A, Teodosio said the documentary was a massive research project with a 22 person research team, and the team thought of ways to preserve their documents so others could use them going forward.

“When I walked onto this project in 2016, I felt like I had walked into a newsroom,” Teodosio said. “I will say without a doubt that this film is an original film, and I will stand by that.”

Maria Agui Carter, a visual and media arts professor and filmmaker, hosted the Q&A and spoke about her experience as a Hispanic filmmaker.

"I feel a huge amount of rage about the appropriation of stories from my community," Agui Carter said. "But I don't believe in banning storytellers if they are from outside a community, especially if there is a true engagement and creative collaboration from people within the communities. I think the thing is not to divide ourselves. What we need to fight is the exclusion of diverse voices.”

In an interview, France said two minutes and 28 seconds of the one hour and 48 minute film consists of footage on Gossett's Vimeo page, but he gathered the footage from their original sources.

During the Q&A, France said the production has reached out to Gossett to discuss the allegations and to see if they could work together in the future but has yet to arrange a meeting.