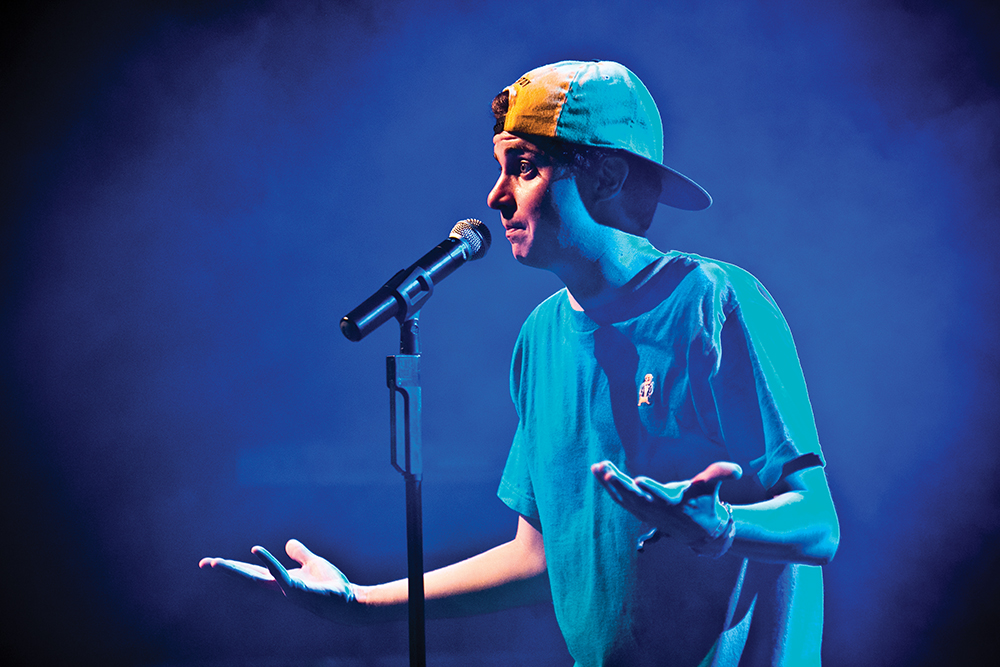 Emerson alumnus and rapper George Watsky, ‘10, sat in the Little Building in 2009 and watched the White House Poetry Jam. On his screen, the then-senior performing arts major saw playwright and rapper Lin-Manuel Miranda perform a song that would become the opening number of his hit musical Hamilton.

Seven years later, Watsky, now friends with Miranda, contributed a track to The Hamilton Mixtape, an album Miranda released last month. Hamilton, which won 11 Tony Awards in 2016, is a hip hop musical about American founding father Alexander Hamilton. The mixtape, which is inspired by the musical’s soundtrack, features covers, remixes, and original songs by artists like Alicia Keys, John Legend, Sia, and Chance the Rapper.

“I was really proud to be asked,” Watsky said. “It was something that I didn’t expect. I had a sense of the other people that were involved and just felt really touched that he would include me.”

Watsky’s minute-long track, "An Open Letter (Interlude)," is a cover of "The Adams Administration," a song cut from the final show. Last year, Watsky recorded the track remotely at a studio in London while on tour for his album, x Infinity.

“The piece was written already,” Watsky said. “Really my job was to just to perform it well. I tried to inhabit it in a way that I thought would do justice to what [Miranda] intended.”

Watsky, who raps under his last name, said he rarely covers other people’s work but that it was easy to make an exception for Miranda.

“I just respect Lin as a crafter of rhymes,” Watsky said. “The way that he uses alliteration and internal rhymes is a similar aesthetic that I aspire to, which is to try and use all the tools in the toolbox of the English language to create the richest rhyme scheme that you can.”

The track, performed from the perspective of Alexander Hamilton, targets John Adams and begins with the line, “An open letter to the fat, arrogant, anti-charismatic, national embarrassment known as President John Adams.” Although the piece is humorous in tone, Watsky said that it’s subversive and highly relevant.

“It’s a shot at egoism and politicians who are unable to put the good of the people that they serve in front of their own self interest,” Watsky said. “You could basically take out John Adams’ name and put Trump in there and it stands. In this political moment, it’s an evergreen message about people putting themselves before the people they serve. It’s a diss track on everything that that stands for and I felt really stoked that I could be the mouthpiece for that message.”

Watsky said he met Miranda through Twitter due to mutual friends in the slam poetry world. They met in person for the first time in 2015, when Watsky performed at Ham4Ham, a series of events where Miranda brings musical guests to feature for hopeful Hamilton ticket winners.

“I think Lin and I are both people who love hip hop and actively and almost aggressively want to be honest about who we are in our performance of it,” Watsky said. “Trying not to manufacture a persona is a very active choice in the way that we present ourselves.”

Watsky said he is currently working on new poetry, music videos for his album, and a 10 year reunion jazz/hip hop album with his band, Invisible Inc., set to be released in the spring.

Watsky said he plans on coming to Emerson’s Semel Theatre next month to read from his book, How to Ruin Everything, in an event sponsored by Emerson Mane Events. The cover features a blurb from Miranda that reads “Funny, subversive … with such brutally honest sentences that you will find yourself nodding your head in wonder and recognition.”

“One of the more unpleasant parts of writing a book is going to your idols and asking them to praise you for marketing purposes,” Watsky said. “I was really lucky and just honored. [Miranda] wrote this really, really nice blurb that I’m positive has had tangible effects on its success.”

Amanda McHugh, a junior writing, literature, and publishing major, and the Emerson Mane Events president, said she met Watsky after his show at the House of Blues last year. McHugh said she suggested Watsky come to Emerson for an event and that he gave her his email on the spot.

“In his music and in his poetry, he really opens himself up to people and makes himself vulnerable,” McHugh said. “The book is like a new side of him that you wouldn’t see from his music, like a different part of his life that he’s sharing, more personal stories about his family and himself.”

Watsky attributed Hamilton’s immense success to Miranda’s skill as a rapper, his love of musical theater, and the subject matter’s enduring relevance.

“[Hamilton] captures the zeitgeist of the moment that we’re in right now,” Watsky said. “I think it’s the musical that embodies the Obama presidency and the spirit of multicultural America. It is the piece that I think resonated with this age that we just stepped out of since now we’re in Trump America.”

Disheartened by Donald Trump’s inauguration, Watsky attended the Women’s March in San Francisco with his parents last weekend. He said it was exciting to see how many people came out and were engaged.

“The one silver lining that I’m taking from the political situation is that it is a potential moment where a whole generation of young artists and politically motivated artists might be able to find some catalyst for engagement and passion,” Watsky said.