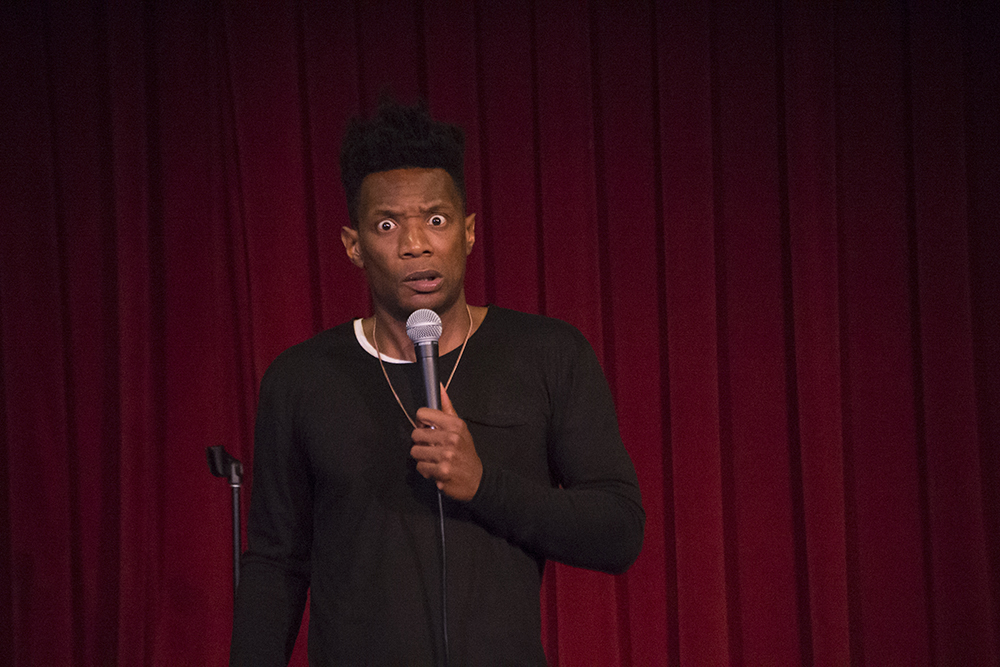 Actor and comedian Seaton Smith may have the spotlight on himself while performing, but he put Emerson students in the hot seat last Thursday night.

Known by many for his role on Fox’s Mulaney, Smith visited Emerson for a stand-up performance. Students gathered in the multipurpose room to hear Smith’s jokes for an hour. The comedian interacted with the audience, asking them deeply personal questions about their love lives and beyond.

He touched on every subject one might expect to be addressed at a comedy show; from current events in politics all the way to the details of his relationship with his girlfriend. Smith spent the hour sharing his witty yet playful remarks about everyday life, animated and theatrical as he danced around the stage.

From the ripe age of 10 years old, Smith took part in various talent shows. He began performing at open mic events in D.C. during his junior year of college. In his performances Smith said he aims for a genuine, conversational interaction with the audience.

Chrissy Fay, a sophomore visual and media arts major, said she is striving to someday become a film director and found it constructive to watch a professional like Smith perform.

“I think it’s really nice that the school is able to bring these professionals to us,” she said. “Sometimes it can be really difficult and overwhelming to find these people and these events on your own.”

Smith even said that he would have liked to have had this major available to him in college.

“When I first started, I used to just do jokes randomly, like ‘that’s a box, that’s a chair…,’” he said. “And then I started to look at comedy as, ‘well, if I can make anything funny, what kind of engaging conversation would I like to have with people?’ And that was a whole soul-searching thing.”

Smith also said he is very aware of the effect it has on students to be able to engage with professionals in their field of interest.

“Comedy is an apprenticed type of field,” Smith said. “I feel like you have to go in the world with somebody and see how they put an hour together; you have to see somebody do it and be like, ‘Oh, that’s how it’s done.’”

Smith also had some words of advice for young people aspiring to work in his profession. He said that, starting out in the world of comedy, he wishes he had listened more.

“I also wish I didn’t think there was one little true magic fix that made me funny,” he said. “I just wish I would’ve listened to my sets a lot in the beginning and just became aware of how funny I already was.”

Smith also said that self-love is an important component to being a successful comedian.

“I had to love myself first. Don’t hate yourself. That whole myth where you gotta be an angry comedian, that’s not real. Comedy is such a rough field, only the crazy people used to do it… It was such a weird thing, it was like going to be a clown or a juggler… So more or less, you had to be crazy to do it.”

“Now that all the sane people saw the crazy people do it, they were like, ‘that sounds fun,’” he said. “So this is the generation of really intelligent, college-educated people trying to make a structure to it.”