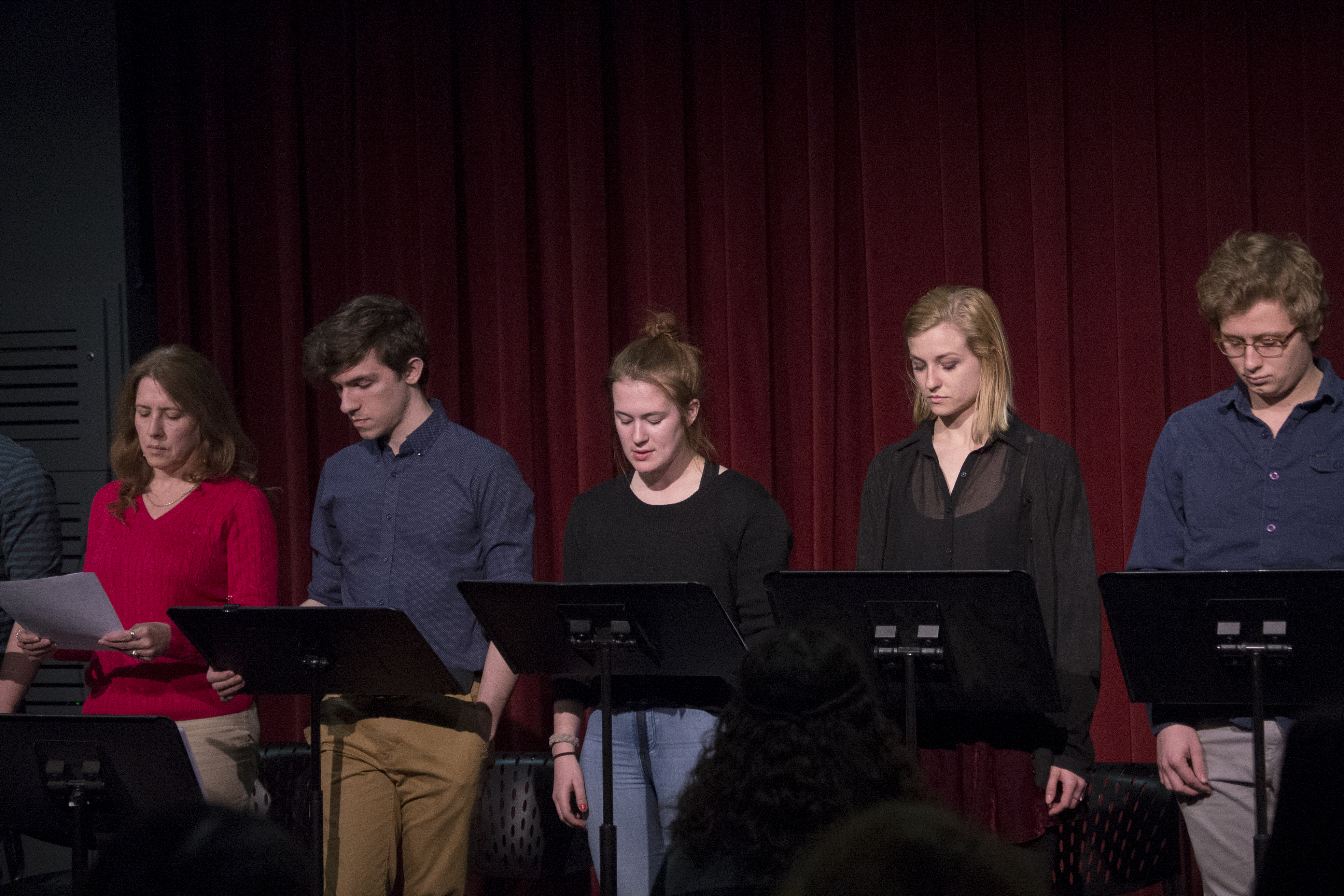 On Patriots’ Day, three years after the Boston Marathon bombings, Emily White, a senior performing arts major and psychology minor, held a staged reading of her play Lockdown, followed by a discussion of trauma, terrorism, and the media.

White said she based Lockdown on her own experiences in the aftermath of the Boston Marathon bombings on April 15, 2013, during her freshman year. Four days later, authorities advised residents of Watertown, Massachusetts, and surrounding areas to shelter-in-place during the manhunt for the perpetrators. White said she was off-campus at the time and that the circumstances felt surreal.

“I ended up getting stuck at somebody’s house in Cambridge who I didn’t know very well,” White said. “I was in this situation where I was like, ‘This feels like it’s scripted. This feels really weird.’”

White said she started writing down her experiences as soon as she returned to Emerson. She said she revisited her work as a senior and has spent the past year crafting Lockdown.

The play follows two Emerson students who, after a night of partying, find themselves stranded at the apartment of an acquaintance. But the story strays from the main narrative, dipping into dream sequences, memories, and even an imaginary game show.

“The structure of the play is essentially a theatricalization of your brain on trauma,” White said. “It’s very repetitive—there are flashbacks, and it’s non-linear.”

In her research, White said she found that, according to the fifth edition of the Diagnostic and Statistical Manual of Mental Disorders, post-traumatic stress disorder can only be diagnosed if an individual had a direct experience with a traumatic event. But White said she was interested in how groups, like the Emerson community and Boston as a whole, respond to terrorist attacks.

“I know I have so many friends who experienced the Boston Marathon bombing like I did and still today they’re like, ‘I don’t know if I’m allowed to feel anxiety and have flashbacks and these symptoms because I wasn’t there.’” White said. “I want people to know that their trauma is valid and that the only way they’re going to reach positive changes and be able to work through it is by acknowledging it, as painful as it is.”

Drawing on psychology and sociology, White said that she coined the term “indirect traumatic response” in her thesis. She defines it as symptoms like those of PTSD attributed to someone who did not firsthand experience the event.

Mary Allendorph, a senior performing arts major who played the character Michelle in Lockdown, said that White brings up a subject that’s rarely talked about.

“It’s the stories that you don’t really think about when it comes to these kind of horrific events, which seem to be happening so often nowadays,” Allendorph said. “Of course you think about the immediate victims, if anyone has died or if anyone was injured. But beyond that, so many other people are affected by it in so many ways.”

After the performance, White and the cast held a talkback, or a post-show discussion. White said that she specifies in her script that the play cannot be produced without subsequent conversation.

“I think that all theater really could have talkbacks if that were possible,” Allendorph said. “I think that’s what theatre and film and any sort of storytelling is about—it’s to start a discussion.”

During the talkback, White said that media coverage of terrorist acts can function as a veiled performance that people passively consume. White said she designed the play to seem like it would have two acts but that it ends after the first to purposefully leave the audience wanting answers.

“With a play, my goal was to give the audience a little bit more agency than the media does,” White said. “It’s giving you the chance to make your own perceptions about what’s really happening and asking you a lot of questions.”

“I thought the talkback was more interesting than the play because it brought everyone’s characters into the room,” Downs said. “One of the audience members said [the talkback] is the second act and I was like, ‘Yes, it is!’”

White said she is working with her honors thesis secondary advisor Eileen McBride, an assistant professor in the institute for liberal arts and interdisciplinary studies, to possibly publish her work in a sociology or psychology journal in the future. White said she wants other researchers to tackle the topic.

“[My thesis] is more to ask questions than to answer them,” White said. “It’s the kind of thing that will hopefully, fingers crossed, carry on after college. I’d love to have this idea studied further by experts and not just by me.”