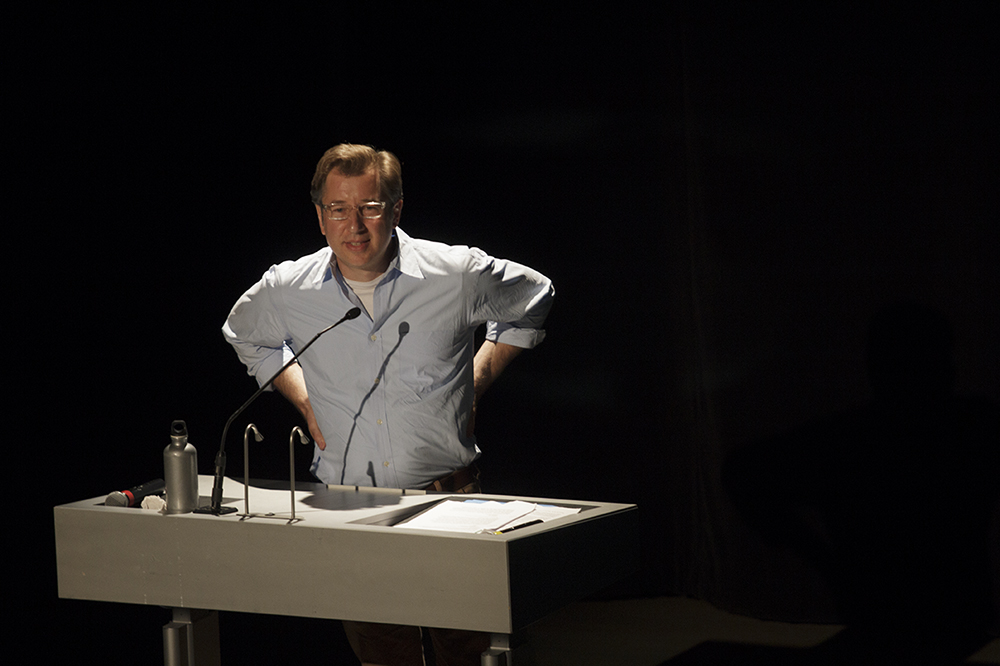 Paul Turano was at the site of Henry David Thoreau’s cabin at Walden Pond in Concord, Massachusetts, when the Emerson professor noticed something that would inspire a seven-year project: a pile of rocks. On the rocks were inspirational quotes and comments inspired by Thoreau’s ideas.

“That’s when I had an ‘Aha!’ moment,” said Turano, who teaches visual and media arts courses.

At that moment, Turano had been working on Wander, Wonder, Wilderness, a film about his personal relationship with nature, for two years.

“That’s when I thought, ‘Oh, this could be an interactive project,’” he said. “I had just bought a smartphone for the first time, and I was aware of its capabilities.”

The film, recast as an interactive documentary, premiered at the Institute of Contemporary Art on Sept. 20 and 21 and chronicles Turano’s experiences in what he called a “first person subjective essay form.” Filmed in over 25 green spaces throughout the Greater Boston area, Wander, Wonder, Wilderness is overlapped with Turano speaking about his own experience, and interviews that his team conducted with people speaking about their connections to nature.

The project was funded by a grant that Emerson offers to full time faculty members who submit a proposal for creative projects and research. Turano declined to comment on the amount of money he received, but said that it covered costs for labor, website design, and editing.

Additionally, a Kickstarter campaign that began on Sept. 19 will help fund the completion of a smartphone app and educational workshops for regional schools, among other costs. As of this article’s publication, it had raised $1,365.

The app, which Turano explained in a presentation after the film’s premiere, will encourage users to record their own experiences with nature, and a website will chronicle the user data with visualizations, maps, and timelines.

Jeff Soyk, who graduated from Emerson’s master’s program in visual and media arts in 2013, was Turano’s former student and helped develop the app and web component.

“The app gives the user the power to respond to these green spaces, to generate their own content and come up with a collective response to our experiences,” Soyk said.

With the app, which Turano said will be available for free in the spring, users will be able to find the green spaces closest to them and find out more contextual information about those spaces. They also will be able to upload their own writing, photographs, and sounds to respond to biweekly prompts, which, using GPS, the app will only allow users to complete within the space’s geographical boundaries.

Turano said he plans for the app to be one aspect of an educational program that encourages discussions among students. He said he has tested the program with the Boston Youth Conservation Core  and with high school students in Emerson’s pre-college program, who he said reacted positively.

“Not many people, especially young people, are asked to be introspective about things, and sometimes that’s a tremendously respectful thing to do to them,” Turano said. “When given that license, they actually have a lot to say. So I’m optimistic for it to be a really effective learning tool for that age group.”

Sarah Ginsburg, who graduated from Emerson in 2011 with a degree in visual and media arts, also helped Turano with the filming of the project.

“The idea behind this is that we’re going to be using our phones no matter what,” Ginsburg said. “So why don’t we use it as tool to also step away from [technology] for a second?”

Major Dorfman, a sophomore visual and media arts major who attended the premiere, said he was especially impressed by the app component of the project.

“I think it’s really cool that there’s a participatory aspect to the whole thing,” Dorfman said. “It’s clever that he’s using technology to bring us back to nature.”