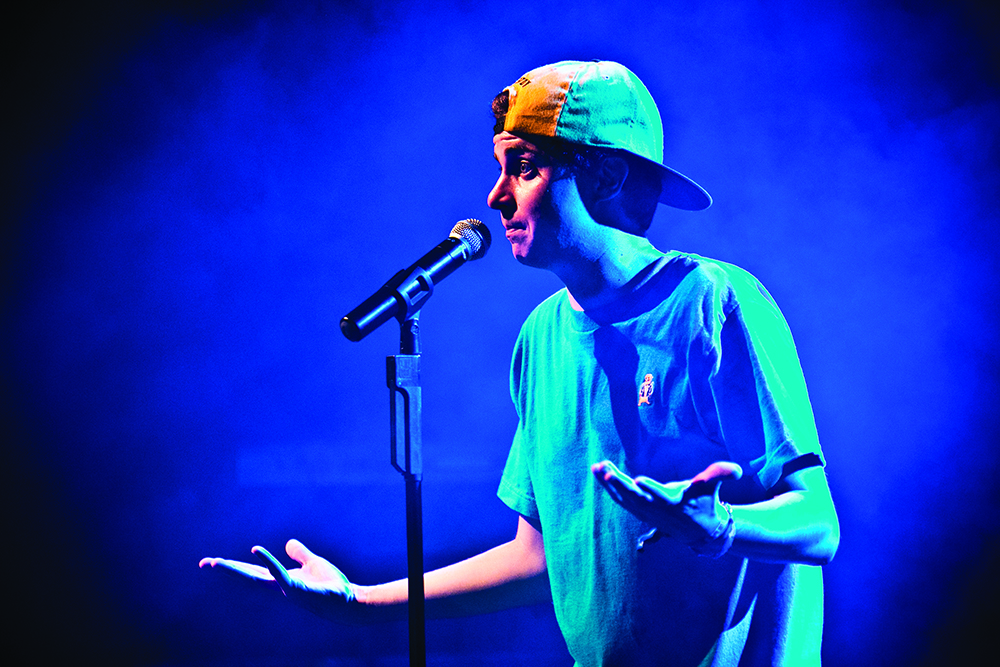 Rapper and spoken word poet George Watsky calls his new record, All You Can Do, an “album scrapbook” of sorts. The cover art features a grainy, black-and-white photo of his father, poet Paul Watsky, donning oversized vintage eyeglasses, a leather jacket, and long, hippie-style hair. In the first song alone, Watsky’s lyrics are full of nostalgic musical references, including Jimi Hendrix, Kurt Cobain and Jim Morrison.

Watsky, who graduated from Emerson in 2010 with a performing arts degree, became well-known in the rap community with the release of a YouTube video that went viral called “Pale Kid Raps Fast.” Now his YouTube channel boasts over 76 million views.

Watsky said that he incorporated 60s and 70s psychedelic rock music into All You Can Do as a tribute to his parents, to whom he also dedicated the album.

“I wanted to make the people who made me who I am at the front and center of this project,” Watsky said, adding that he grew up in a household that valued literacy. Watsky said that he frequently shares his writing with his poet father.

All You Can Do, which was released on Aug. 14, is a way for Watsky to connect his generation with that of his parents’. While his 2013 album Cardboard Castles featured interviews with a 10-year-old boy, All You Can Do transitions between many songs with sound clips of Watsky’s parents remembering the 60s and 70s.

In the outro of “Let’s Get High and Watch Planet Earth,” for example, Paul Watsky reminisces about hippies, who he describes as “wide-eyed with floppy pants.” He continues, “I thought there were some good things about what they were doing—a lot of good things, especially the sex…”

Watsky said that he viewed his new album as an extension of Cardboard Castles, since both contain themes of inter-generational connection.

“I wanted to explore what it meant to be a part of this generation,” Watsky said. “Not everyone wants to make mindless party music all of the time.”

Rather than drawing from the trap and house influences of today’s hip-hop, Watsky said he was inspired by his mother’s record collection, an array of old 38s and 45s that she passed down to him. Watsky said his mother gave him classic rock albums by artists like Derek & The Dominos and The Beatles. The melodious, harmony-driven sounds of these artists are reflected in Watsky’s latest work.

Despite the presence of the past in All You Can Do, Watsky is moving forward sonically and stylistically. He said that his latest album is more mature and less self-indulgent than Cardboard Castles.

“We didn’t want everything to be quite so clean,” he said. “It’s intentionally grimy and unpolished.”

What Watsky did want polished, however, was the quality of his music videos.

“I take music videos just as seriously as the songs, having gone to Emerson and working with filmmakers,” Watsky said. “Doing great videos is something that’s really important to me.”

So far, Watsky has released six music videos from All You Can Do on his YouTube channel, including a video for “Bet Against Me” that features datamoshing,  the practice of compressing video files together to create glitch-art. The datamoshing and animation was done by Matt Caron, who graduated from Emerson in 2011.

“If you were to go on set of my music videos, 95 percent of the people working there are people who I went to [Emerson] with,” Watsky said.

Watsky wanted not only his videos, but also his tour announcement to be elaborate. In the video, Watsky announces that musicians Anderson Paak and Creme Fraiche will be joining him on tour, and appears to do five backflips before saying with a shrug, “Or don’t come to the show, and let the regret gnaw at you for the rest of your life...That’s all you can do.”

Fans on the All You Can Do tour can collect punch cards that give them more perks with every show they attend. In addition, Watsky will be performing a 30-minute spoken word poetry segment before each show for an extra $55, which includes a meet and greet and a VIP poster.

“I wanted to incorporate [spoken word] more and make it the fabric of the album,” Watsky said. “I have the opportunity to expose people to poetry that normally wouldn’t experience it. If I can turn them on to the genre, I’m going to keep doing it at shows.”

Watsky is scheduled to perform in Boston on Nov. 7, and said it is one of the cities he is most looking forward to.

“It’s a show that matters to us a lot in the tour,” Watsky said, adding that his tour crew is like a ‘Boston transplant crew.’ “It’s going back to a place where I spent a lot of time in; I have a special connection to the city.”