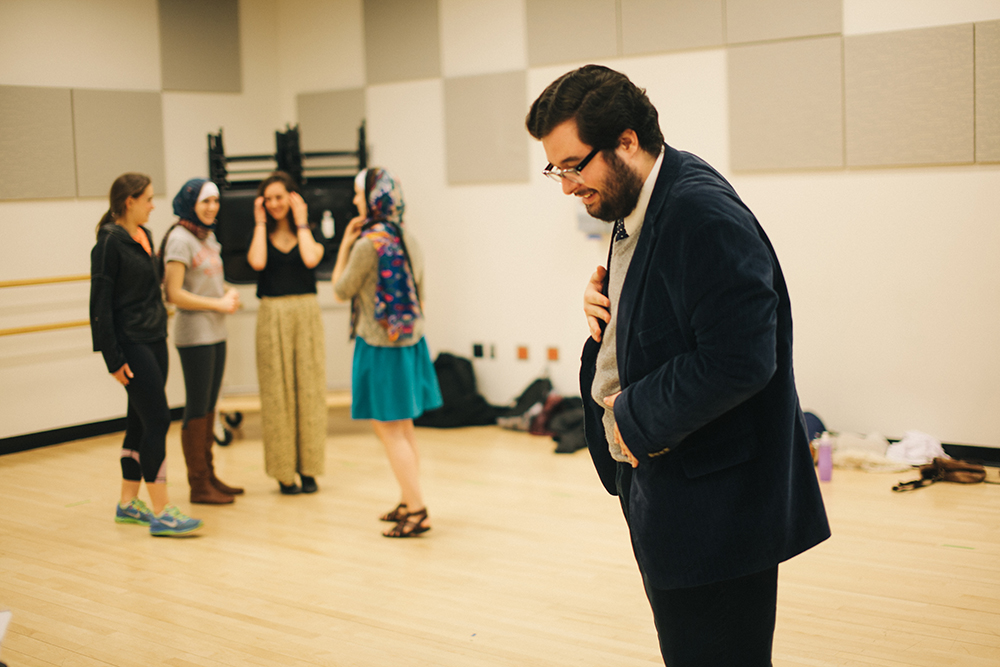 While most students spend their summer vacation at a dead-end job or lounging at a pool, Mahesh Harwani, a senior marketing communication major, spent his transliterating a Hindi script of Romeo and Juliet into English with his father. The process, he said, took about four months, and began the inception of New Majority Theatre’s version of one of Shakespeare’s most well-known tragedies.

The adaptation is set in 1940s Lahore, Punjab, prior to the partition of the British Indian Empire, and parts of the script are in the Hindi and Urdu languages.

“We’ve asked our cast to speak not only Shakespearean text, which is notoriously difficult for students, we’ve asked them to learn Hindi,” said Margaret Clark, co-director of Romeo aur Juliet and founding member of New Majority Theatre. “That’s no small task.”

Founded in 2012, the New Majority Theatre aims to “produce works which tell a previously untold story, with an emphasis on cultural oppression,” according to the mission statement on its Facebook page. Last year, the troupe put on a production of Hamlet set during the Mexican-American War.

Michael Rodriguez, the producer of Romeo aur Juliet and a founding member of New Majority Theatre, said the idea of forming a new theatre troupe rose out of a frustration that more ethnic students at Emerson weren’t getting a fair shot at casting.

“We were falling under a lot of stereotype roles,” said Rodriguez, a senior performing arts major, who is Puerto Rican. “I came to Emerson for the full experience; I didn’t want to be cast as the gang member.”

To ease the process of learning a new language for the actors, seniors Harwani and Clarke enlisted Aakruti Jagmohan, a senior journalism major who was born and raised in Banglalore, India, as a language coach. Jagmohan worked one-on-one with actors to ensure that they understood the correct Hindi pronunciation, and provided them recordings and phonetic translations.

“It gave a lot more confidence to the cast,” said Harwani, the co-director of Romeo aur Juliet and a founding member of The New Majority Theatre. “Hearing from a person who grew up in India say that they’re doing well resonates a lot more than me saying it.”

Harwani said he wanted the cast of Romeo aur Juliet to be educated in the history and background of 1940s India. To fully prepare the troupe for their roles, Harwani showed multiple BBC documentaries on Indian history, set up acting workshops led by staff members that focused on the meaning of culture, brought in Muslim students to talk about their experiences, and took the cast to a Hindu temple on Commonwealth Ave. Harwani himself also lectured about what it was like to grow up Indian.

Harwani said he assembled a dramaturgy team to research the contextual information of the show and to answer any questions that arose during the rehearsal process.

“We were not willing to compromise by misrepresenting any culture,” Harwani said.

Harwani said that he wanted to raise awareness of Indian culture and history through the production. Rather than have the star-crossed lovers be restricted by the Montagues and Capulets, Harwani separated the characters into Muslims and Hindus. Neutral characters, like the original Friar Lawrence, practiced Sikhism, a religion that originated in the Punjab region. Harwani said that he wanted to use Romeo aur Juliet to showcase Indian culture, which is often misrepresented in mainstream media.

“I am Indian, and I’m really proud of my culture,” Harwani said. “I wanted to represent my culture the right way. Mainstream media tends to exaggerate [Indian culture]… Being an Indian citizen myself, I know there’s a lot more that could be shown.”

The creative team of Romeo aur Juliet also aimed for a diverse cast, though only half of the 14 cast members would consider themselves non-white. The New Majority Theatre’s mission statement said it aims “to bring together artists from every social, economic, cultural, and racial background.”

To address this, Harwani said he sent an email blast to every Indian culture group he knew of in the area and opened up the auditions to all undergraduate students in Boston. He cast one Berklee College of Music student, Alexander Ammons, and one Tufts University student, Ravi Popat, in the show.

“I knew it would be a challenge,” Harwani said of attaining a culturally and ethnically diverse cast. “That was something I knew from the start because of the platform we were offered. There isn’t a sizable Indian community. For us to expect any different would not have made sense.”

Nyla Wissa, a junior performing arts major, said The New Majority Theatre inspired her to create her own theatre troupe, Flawless Brown. Like New Majority Theatre, this troupe also aims to promote diversity on campus with a cast comprised solely of women of color, she said.

“More clubs that have diversity is better than nothing at all,” Wissa said. “I don’t see why anyone would want to be in competition with other groups that have the same goal.”

Sandrayati Fay, a sophomore performing arts major, stepped up to the role of Juliet with only two weeks before opening night.

Fay said that she is familiar with Muslim and Hindu religions since she has lived in Java, Indonesia, and Bali, Indonesia.

“It’s really interesting that I’m finally able to take what I have experienced and share it in a different form,” Fay said. “In this particular group we’re magnifying cultural awareness through our art.”