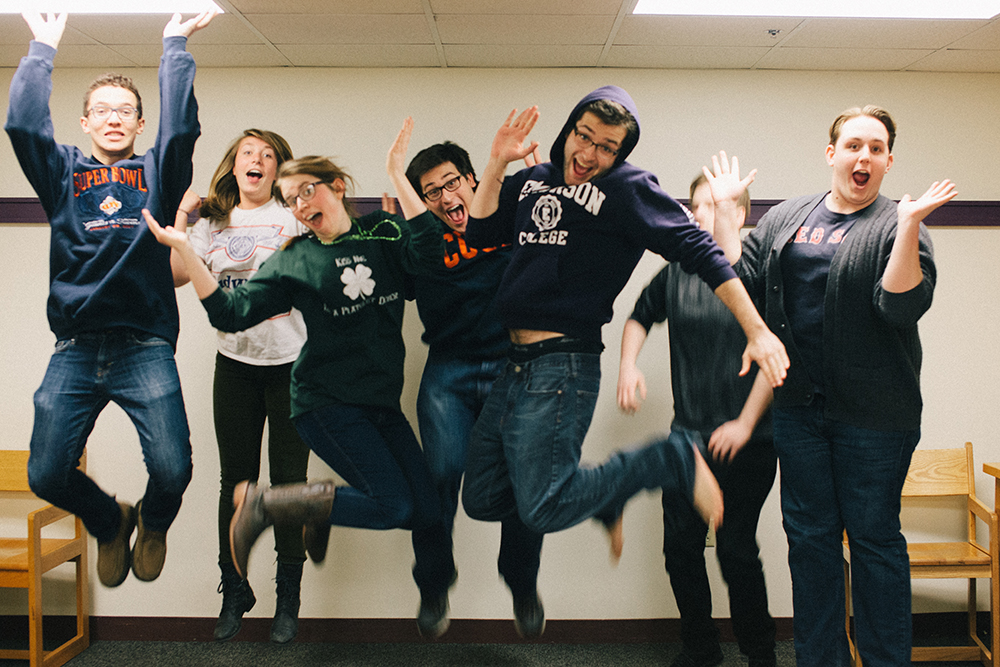 When freshmen Dan Goldberg, Pablo Escobosa, and Maggie Noren auditioned for Emerson’s comedy troupes at the beginning of the fall semester, they were all disappointed to discover that they hadn’t been chosen for a single one.

“When we found out...we thought, ‘Fuck it, let’s try to do this on our own,’” said Goldberg, who is a visual and media arts major.

And so he, Escobosa, and Noren founded Derbyn and the Drakefish, a nine-member Emerson comedy troupe currently operating without SGA recognition.

“We’re primarily based on spite,” Goldberg said with a laugh. As one of three co-founders, Goldberg said he hopes that Derbyn and the Drakefish will develop into a film collaborative that allows other non-members to submit their work to watch it grow from conception to the screen.

“We try to be significantly more inclusive [than other Emerson comedy troupes],” said Goldberg, who added that he’d like for Derbyn and the Drakefish to collaborate with other on-campus troupes once it has gained more of a reputation in the Emerson comedy community.

Derbyn and the Drakefish is currently preparing for a live show on April 1 in Room 233 of Walker, where the group will showcase the sketches and a few videos that it has worked on since its conception in the beginning of the year.

“A lot will change when we have the live show, where we can at least prove that we know what we’re doing,” said Escobosa.

Noren said that audience members can expect “a lot of disappointed parent characters” in the show, akin to one of the group’s YouTube videos called “Good Cop / Dad Cop.” The skit involves a father who guilt-trips his moody son into confessing a crime by showing him pictures of childhood memories, like a camping trip.

Escobosa said another reason for establishing the group was to use up harbored vitality, noting that Derbyn and the Drakefish is composed of “crazy, high-energy” individuals.

“We used to get on Green Line trains and yell at each other that we loved Hootie and the Blowfish,” Escobosa said.

That wasn’t the only time that the group has joked about a musical artist. Though Goldberg isn’t a huge fan of Drake, he is notorious for having an unexplainable fixation on the rapper: He and Noren have a WECB show called The Drake Hour, and he often asks his friends their favorite Drake songs as a joke. Derbyn and the Drakefish is named after a combination of the two artists, Drake and Hootie and the Blowfish, as well as Goldberg’s acquaintance Andy Derbyn. Though the group has only met Derbyn a few times, Escobosa described him as “cool but reclusive.”

“We’ve played [Andy Derbyn] up as a mythical being,” Goldberg said, adding that the group often jokingly prays to Andy at the end of a rehearsal session.

Besides paying homage to these inside jokes, Derbyn and the Drakefish aims to give freshmen experience with comedy writing and a creative outlet, according to Escobosa.

“You spend so much time as a freshman [visual and media arts major] learning about TV but never writing it,” Escobosa said. “We’re taking in so much that we don’t put anything out, so putting something out now is almost therapeutic in a way.”

Derbyn and the Drakefish treats comedy writing as a collaborative process by holding writing workshops for members, and encouraging a tight-knit atmosphere within the group. The members are a part of a group text message, where they can share funny photos, plan trips to the dining hall, and “mutually vent,” according to Goldberg.

“It helps with the dynamic of the group that we’re friends outside of the troupe,” Noren, a visual and media arts major and co-founder, said. “We’re different because there’s no hierarchy; we all started from the same point, so it’s been easy for us to become closer because we’re all in the same boat.”

According to Willem Smith, the secretary of Jimmy’s Traveling All-Stars, one of the only issues he sees with the new troupe on campus is an increase in competition to use performance spaces.

“The biggest issue is performance space. It’s really tough to get dates particularly in the Cabaret,” said Smith, a sophomore visual and media arts major. “But it’s really cool that people are collaborating and growing as comedians.”