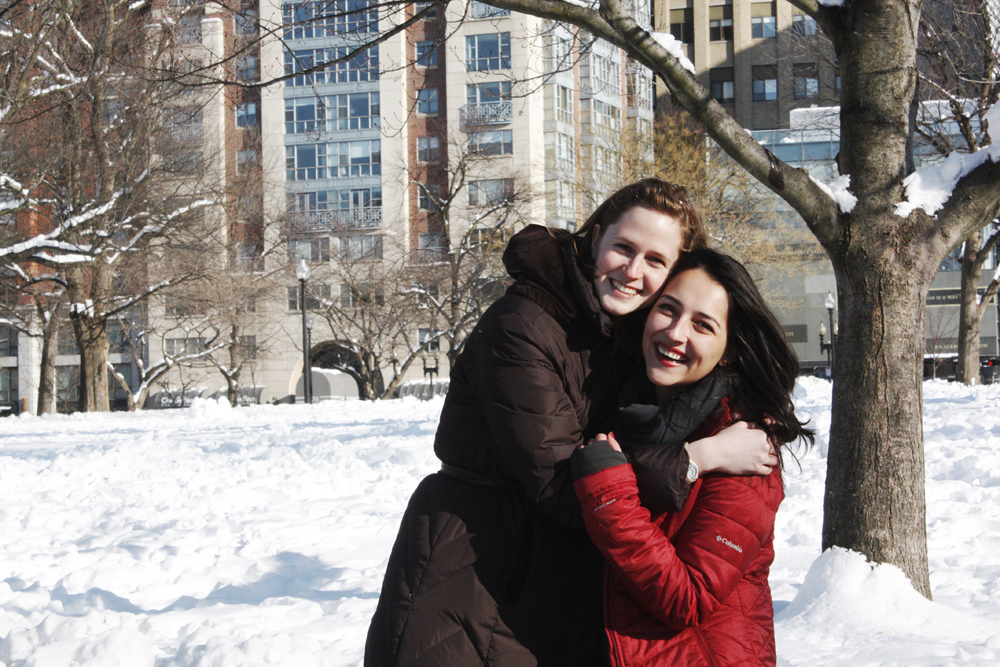 Four friends from three different countries — India, Tanzania, and Mexico — discovered that as they attended Emerson College, in a city far from home, they missed the sounds they grew up listening to.

This sense of nostalgia is what led them to create and host their own international-themed radio shows on WECB. This spring semester, Chai Time, Riga Makofi, and Ritmos y Colores are celebrating a range of different cultures and lifestyles.

Aakruti Jagmohan, a senior journalism major, is a self-described “walking, talking ambassador for India.” She grew up in a city in South India called Bangalore, where she developed a love for dancing, singing, and Bollywood movies. Jagmohan said she noticed a lack of Indian culture at Emerson, especially in the music scene.

“There was no Bollywood radio show,” Jagmohan said. “I wanted a show that promoted different cultures.”

At the start of the 2013 spring semester, Jagmohan created Chai Time, a radio show dedicated to Bollywood music and other aspects of Indian culture, including food, language, and news.

Each weekly show is dedicated to a theme, like the new year or Valentine’s Day, and features two Hindi words of the week, a recipe of the week, and Indian-themed political and entertainment news.

According to Jogmohan, the words are simple and easy to remember, and the recipes are for snacks that the typical college student is able to make.

But Jagmohan’s main passion is music.

“I will actually choreograph a dance in my head; that’s how attached I am to music,” Jagmohan said.

Bollywood music ranges in sound and style, from contemporary-alternative to pop, but all genres encourage dancing and movement. To expose her weekly listeners to different types of Bollywood music, Jagmohan says she constantly keeps up on recently released Bollywood movies, listens to various Indian radio stations online, and hears about less well-known music through her friends back in India.

“I like playing mainstream music, but I love to promote the voices that haven’t been heard enough, because they totally deserve it,” Jagomohan said.

Anita Kalaitzakis, the host and creator of WECB’s Piga Makofi since September 2012, faced the same issue as Jagomohan.

“WECB is free form and taps into different musical genres, but it was lacking in the international sense,” said Kalaitzakis, a senior journalism major from Tanzania. “I thought, ‘hey, why don’t I play the kind of music I grew up with, and explore the music of other African countries?’”

Kalaitzakis, who is also the assistant program director of WECB, said she chose to focus on a different part of Africa for each week’s show, featuring African genres that range from afrobeat and reggae to Tanzanian hip-hop, to expand cultural awareness among her listeners, and to highlight the diversity of the countries themselves.

To do so, Piga Makofi, which translates to “clap” in Swahili, features positive news from Africa every week. Kalaitzakis also runs a blog for the show that includes links to news articles, past playlists, photography, and poetry, among other types of media.

Laura Zea and Cedrine Streit are more than co-hosts; they’re roommates, best friends, and collaborators. Both senior marketing communication majors who share a love for Mexico said they first bonded over a love of Latin music. So, in a two-hour brainstorming session in their living room, they created Ritmos y Colores.

Ritmos y Colores, which is currently in its second and final season, features a different theme each week — last week’s was ‘celebration’ — and Latin music ranging from salsa and regional Mexican music to Latin pop and alternative.

“We play mostly what we miss hearing, little things that remind us of back home,” Zea said.

According to the co-hosts, the duties naturally split between them, with Zea mostly choosing the music, and Streit focused on writing the script.

“Laura has the music library in her head stored,” Streit said of her friend. “She’s very involved in the music scene, and she knows the ins and outs far better than I do.”

Zea and Streit said they draw on their personal music libraries, Latin friends involved in the music scene, songs they can remember from their childhoods, and new artists they discover through media outlets like YouTube and Spotify.