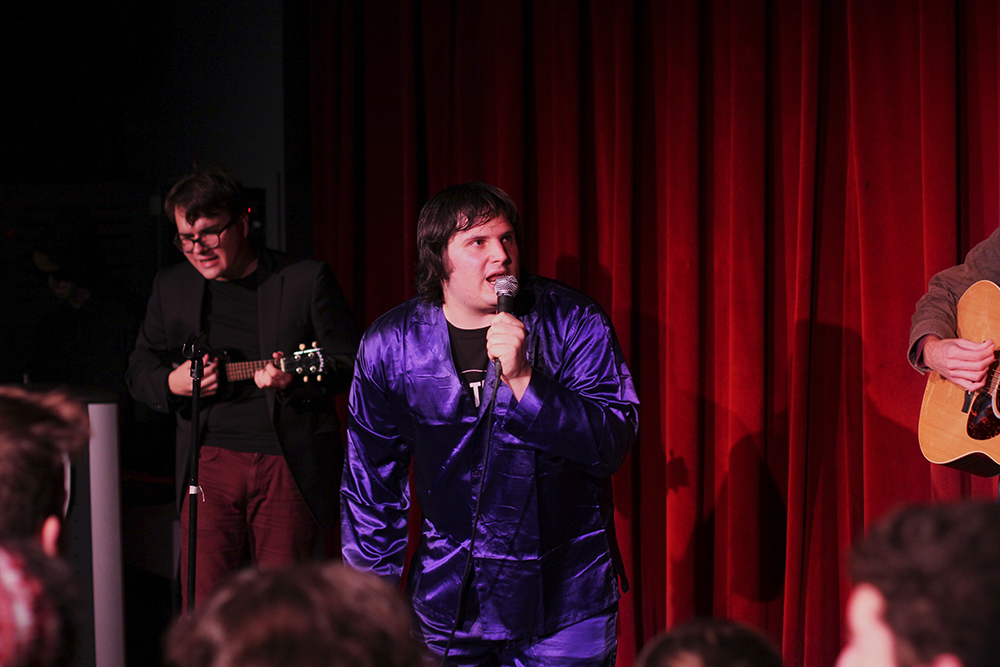 Zach Stetson & Company started as one student mixing experimental tracks in the privacy of his dorm room and has evolved into a conceptual comedy performance involving masked dancers and audience-centered shenanigans.

Junior Zach Stetson said that when he began making music, he had taken vocal lessons but had never composed music, “if you could even call it composing.” He said he played around with features on GarageBand, a music production program, for roughly three weeks before releasing his first album, Love Each Other, on Bandcamp, an online platform for independent musicians, in July 2013. He has since produced two more albums and put on three live shows.

“I thought, ‘what if I released an album, that’d be so stupid,’” said Stetson, a visual and media arts major.

After releasing one album, Stetson said he became obsessed with the idea of Zach Stetson & Company being a legitimate band.

“I thought, ‘what would a band do to promote themselves?’” Stetson said. “The next logical step would be to do a live show.”

The band, comprised solely of Stetson and his computer, “Company,” performed a show called Zach Stetson & Company: The Return in the Multipurpose room on Sunday, Nov. 2.

The show featured roughly 15 songs. Some are originals, like “Loops,” which juxtaposes different sound elements like electronic samples and screaming, while others like “Boloco”—a Weird Al-like parody of Arcade Fire’s “Rococo”—highlight the comedy that drives most of Stetson’s work.

“Everything we do on stage is a joke, but we will never admit it,” said Stetson. “It’s a part of our narcissistic persona.”

Stetson said that he plays a character on stage that is “a little full of himself.” His character creates music comprised of random GarageBand loops and amateur beatboxing, but “the Zach character treats it like an amazing work of art.”

The show also featured comedic routines, like a theatrical reenactment of the Wikipedia synopsis of Edgar Allan Poe’s The Raven.

Austin Dodge, a junior visual and media arts major who has attended two of Stetson’s shows, said that he was a huge fan of the experimental comedian.

“Zach Stetson is not only a musical artist, but an experience creator, and for that he is next level,” said Dodge, who is also the creator of an experimental web series called Show. “He brings a spice of hype and a dash of excitement with extra love to create this incredible, audience-driven, Zach Stetson-led, lifetime achievement-worthy show.”

Dodge said that he thinks many Emerson students make experimental comedy because they are tired of the comedy that currently exists on campus.

“We want to push the limits of what comedy can actually be,” said Dodge.

Dodge added that Stetson’s shows are heavily based on audience participation.

Stetson’s set featured two collaborators, junior performing arts major Nick Liam Holmes and Alex Morand, a junior visual and media arts major. Stetson added that many of the ideas for the show came about while he, Holmes, and Morand were joking with each other in Colonial.

Holmes was born in North Yorkshire, England, and said that his “outsider perspective” makes him a valuable collaborator.

“When you need to enter a culture from the outside, you become aware of all the little things people don’t realize,” Holmes said. “This increased perception makes me believe that everything can be done differently.”

Stetson said that he, Holmes, and Morand enjoy a style of comedy that he calls “alternative.”

“A lot of the comedic elements are very based on awkwardness, or making the audience uncomfortable,” Stetson said.

During an original song called “Nothing Compares 2 U,” which Stetson described as “slow and dramatic,” he danced with audience members. Then, he brought his friend Brian Ash, a junior marketing communications major, onstage to slow dance with him. In an unexpected moment, Ash and Stetson kissed.

“What comedy is a lot of the time is the unexpected, and we’re at the point where we can expect everything that comedy on campus is going to give us,” said Dodge. “So to shake someone up, and show them something they don’t even know they want, is pretty cool.”