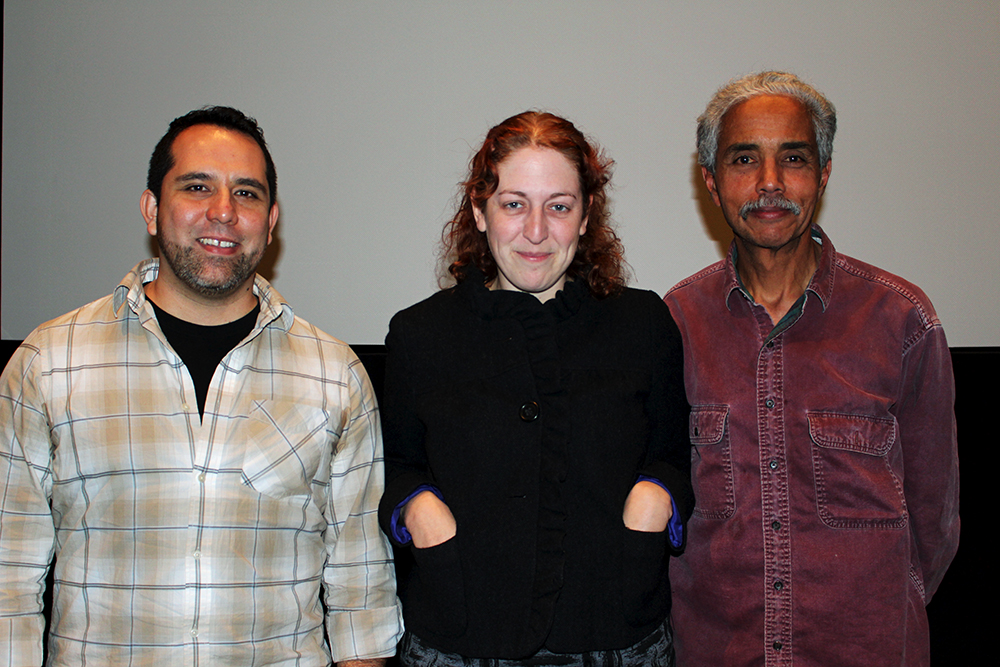 Vivian Maier, who worked as a nanny, used a variety of different pseudonyms in her lifetime: V. Smith, V. Meyer, V. Mayer. She spoke in a French accent that may or may not have been fake. She moved around a lot, and each room that she stayed in was reportedly padlocked.

It wasn’t until the winter of 2007 that some of the secrets she kept were revealed, when amateur historian John Maloof purchased a box of her negatives at an auction center for $380.

That purchase would later reveal itself to be one of the greatest discoveries of the photography world. Although Maier died in 2009, her work is now shown in galleries across the globe.

Maloof compiled his research of Maier’s work and life into a documentary, Finding Vivian Maier, which was presented at The Bright Family Screening Room on Tues., Nov. 11 as part of the Bright Lights film series. Following the screening, assistant visual and media arts professor Camilo Ramirez led a discussion.

“She was ahead of her time,” said Ramirez in an interview. “She was breaking ground, at least.”

Anna Feder, the events and internship manager of the Visual and Media Arts Department who brought Finding Vivian Maier to Emerson’s screen, said that she stumbled upon the film this past summer.

“For starters, there’s always an interest in documentaries at Emerson,” said Feder. “But it’s so rare that I have programming that also appeals to photography minors.”

Feder said the most impressive part of Maier’s work was the photographer’s ability to step out of her comfort zone.

“She went to neighborhoods that were poor and racially mixed in the ’50s and ’60s,” said Feder. “She gets really close to people that are very different to her and finds something relatable about them.”

Ramirez agreed that the intimacy of Maier’s work is part of what made it profound, but added that the story behind it is also important.

“Usually when we screen films at the Bright, it’s to share and celebrate the work of an artist, and tonight is no different,” he said in an introductory speech prior to the screening. “Vivian Maier’s work is exceptional, and so is her story. We’re not just here to see the work, but we’re also here to see what the story is.”

Before the film was screened, Ramirez asked the audience to consider the integrity of Maloof’s portrayal of Maier’s life.

“If Vivian Maier is no longer with us, how much of her artistic vision remains?” Ramirez asked roughly 40 spectators.

Ramirez added that a legal battle emerged after the film’s release between Maloof and David Deal, a former photographer and current lawyer who found an heir to Maier’s work­—a first cousin once removed living in South France—that caused the rights to Maier’s photographs to be frozen.

Due to the international nature of the lawsuit, Ramirez said it could be years before the legal battles are resolved.

Maloof, who also co-directed the film, is not only being questioned legally, but from an artistic and moral perspective.

Stefanie Klavens, a professional photographer who attended the event, said that she wished more of Maier’s stills had been featured in the documentary rather than Maloof’s frequent narration of his investigative process.

“The movie felt a little bit like John Maloof commercial,” said Klavens. “He’s pitching for his own agenda, I felt that was very obvious.”

Maier’s camera, a Rolleiflex, made square negatives, but Ramirez said after her death, her work was printed in a rectangular shape. That’s just one example, he said, of decisions being made about her work that she has no part in.

Maier was considered a pack rat, and in the film, Maloof displayed many of her belongings—including personal letters, clothing, and receipts—as a way to understand the artist better.

“I felt a little bit strange about the presentation of it here, like there’s a kind of fetishization of her objects like her hats and jewelry,” Ramirez said. “Which, ironically, takes us away from thinking about the work itself and into this other narrative of who she was.”

Rider Doolittle, a sophomore communication studies major, said since his father owned a storage unit, he would often go through the possessions of people who passed away.

“You create your own mythology, your own fairy tale, about who this person was,” said Doolittle. “But at the end of the day, you have to come to the realization that just because you read letters, you don’t know who they are.”

Doolittle said that in Finding Vivian Maier, Maloof plays up the idea that there’s a mystique behind Maier’s life.

“I think he’s just trying to pique people’s interest to sell more copies of her prints that he profited on by chance,” Doolittle said. “I think it’s crazy that he’s attempting to bring life to this person whose work doesn’t really need a life beyond itself. She was a documentarian photographer, so I don’t think you necessarily need to know who she was to appreciate her work and gain beauty from it.”