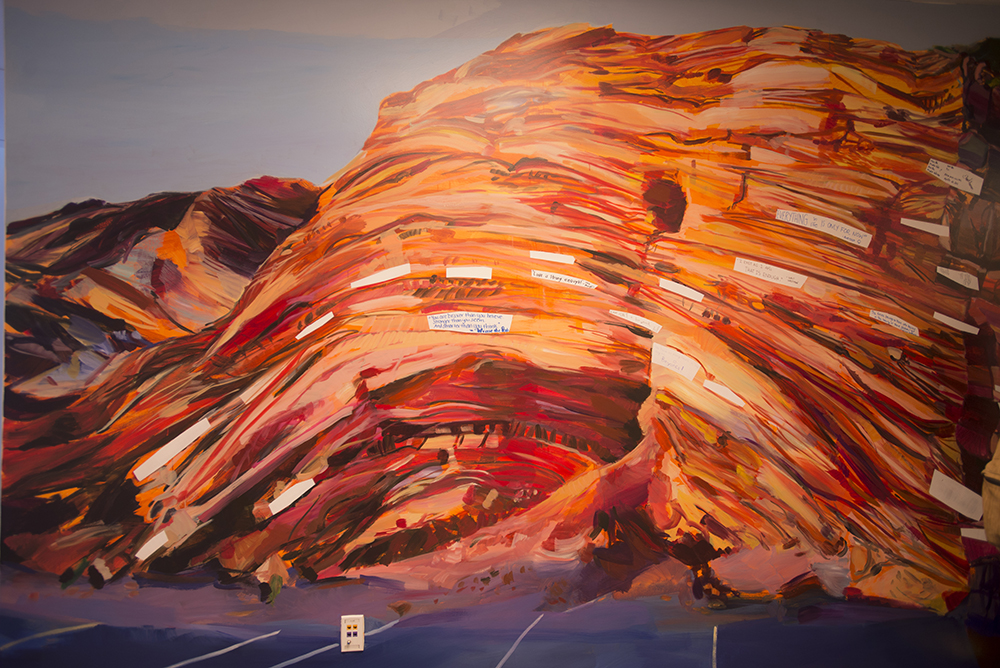 Julia Cseko described her new mural on the bottom floor of Walker Building, which colorfully features the words of Canadian philosopher Marshall McLuhan, as “a way to share relevant literature without being annoying.” The mural, A Coney Island of the Mind—Marshall McLuhan, was one of three murals to be painted on campus over the past few months.

“I like the idea that it’s in the entrance of the building,” said Cseko, who graduated from the School of the Museum of Fine Arts in 2013. “You’re greeted by sayings that question how you live…it sparks people to think.”

Cseko, along with artists Annie Blazejack and Josué Rojas, were selected by Emerson faculty members to feature their artwork on walls around the college.

Cseko and Blazejack, who also graduated from the School of the Museum of Fine Arts, said they both stumbled upon an Emerson advertisement earlier this year that called for muralists. They submitted their proposals, which were accepted, and were each given about a month to complete their projects.

Blazejack said she was paid $3,000 to paint the mural on the fifth floor of Paramount, Rock Wall for Sedimentary Drawing, and said the rock featured in the painting was a metaphor.

“These layers of sedimentary rock, compressed over millions of years, were made with layers of paint set down quickly,” Blazejack explained. “It represents the history of the school, and all these students moving through and graduating.”

Blazejack purposefully left square blank spaces throughout the mural for students to leave their own legacies.

“The thought is that people will write and draw in those,” Blazejack said. “Once you make your mark on the wall, that will be something you can point at and say, ‘This is one of the many ways I’ve left a trace of my time at this school.’”

The third mural, which was collaboratively painted on the 10th floor of Walker, features what Robert Amelio, the director of diversity education and human relations, calls “ribbons of colors intersecting [and] floating bubbles.”

Amelio said he came up with the idea to feature a mural last fall, and came into contact with Rojas, a muralist in the master’s program in painting at Boston University, through Emerson’s distinguished curator-in-residence Joseph Ketner.

“We wanted something that grasped being in Emerson, its energy,” said Amelio. “I thought, ‘We’ve got lots of murals in this city, why don’t we do one here with a lot of people contributing?’”

Amelio sent an email to the Emerson community in May inviting them to join Rojas in the process of creating the mural.

Amelio said that about 30 members of the Emerson community joined him and Rojas, including Gregory Payne, associate professor and interim chair of the department of communication studies, and Emerson Police Chief Robert Smith.

While Rojas took the lead on the mural’s design concept, colors, and execution, he said that it was very much a participatory project. Rojas and Cseko said they were paid for their work but declined to specify the amount.

“The experience itself was a great community builder, and a great example of what can be done between a lot of different people,” said Rojas, who will graduate from Boston University in 2015. “The idea is to make beauty, and make our mark in a way that’s collaborative.”

Smith said the experience made an impression on him. “It was inclusive and emblematic of the people there.”

Four judges—Rojas; Amelio; Isabella Gordillo, an Emerson senior political communication major; and Sylvia Spears, vice president of diversity and inclusion—are leading a naming contest for the 10th floor mural, and the winner will be announced in a ceremony on Oct. 16.

Ketner said the murals were a way to bring attention to fine arts at Emerson, which he said often takes a backseat to performing and media arts, in a practical way.

“It dramatically enhanced the relationship with the space,” Ketner said of Walker’s 10th floor mural, “and that always makes for a better work environment.”

Agatha Kereere, a Beacon correspondent, contributed to the reporting of this article.