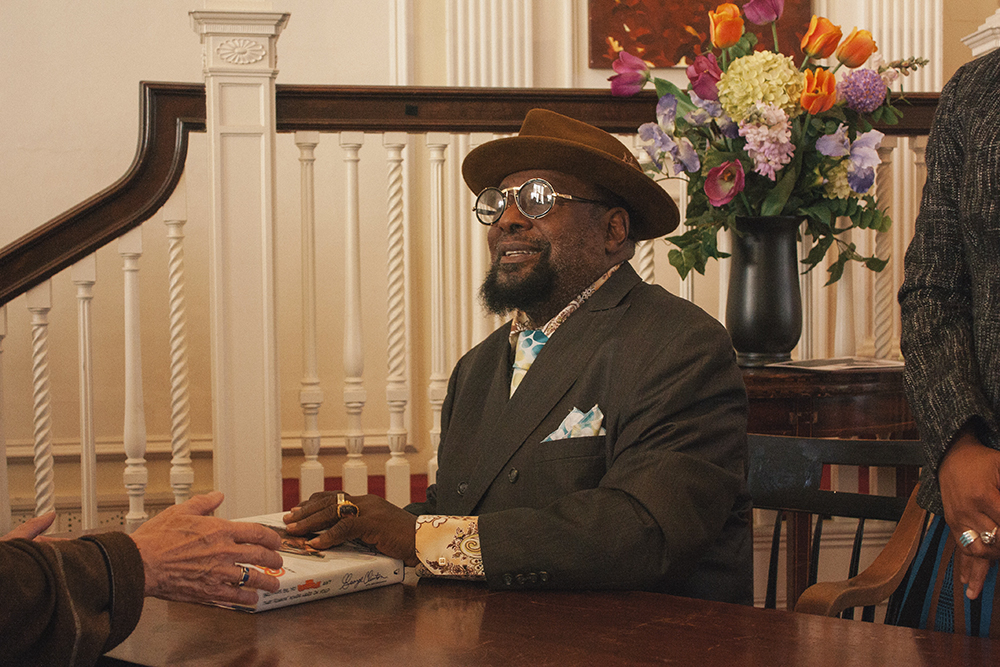 George Clinton is known for a few things about his performances throughout the 1970s: donning flamboyant costumes made of flags and diapers, tripping on acid, and of course, bringing the funk.

Clinton is the mastermind behind the bands Funkadelic and Parliament.

In a discussion with Emerson professor Tim Riley on Oct. 25 at the First Parish Church in Cambridge, Clinton spoke of his recently released memoir, Brothas Be, Yo Like George, Ain’t That Funkin’ Kinda Hard On You?

“Clinton’s actions in the ‘70s were not taken seriously at all,” said Riley, an assistant journalism professor, in an interview with the Beacon. “Nobody thought we’d be listening to this stuff in 40 years.”

One of Clinton’s most famous props is the P-Funk Mothership, a full-sized spaceship that appeared in many of his concerts, carrying many of Clinton’s alter-egos like Dr. Funkenstein to the stage.

“We knew it was a prop that would last through time,” said Clinton, 73, during the event. “Characters live longer than people. People get old…but characters can be reinterpreted, reinvented.”

Wendy Walters, an associate professor of writing, literature, and publishing, said that Clinton was groundbreaking partly because of his use of imagination.

“He creates and teaches us on stage about the pleasure and power of the imagination,” said Walters, who teaches an African-American literature class.

The talk, hosted by Porter Square Books, was located in Harvard Square, where, upon his arrival in 1967, Clinton “began a party that lasted four years,” tripping on acid, partying on roofs, and playing funk music.

Written with Ben Greenman, Clinton’s memoir chronicles his life, from starting a doo wop band while working at a barber shop in his teenaged years to the current legal battle in which he attempts to wrest his music out of the control of those who he believes are infringing upon his rights.

“It’s a very vivid picture of how the music industry really exploited talent,” Riley said. Riley, who is also the author of Lennon: Man, Myth, Music, said that Clinton is one of the most widely-sampled musicians, particularly among hip-hop artists like Snoop Dogg and Dr. Dre.

According to Riley, Clinton’s court battles are about chasing not samplers, but the music managers that he lists explicitly in his memoir.

“There’s a touch of a revenge motive to the book,” said Riley, but added that Clinton sees sampling as a positive thing. “He is tickled to death when people find new ways of twisting his beats into something new.”

Jay Scott Henderson, a Boston musician who attended the event on Saturday, said that he knew Clinton informally for many years through the Boston music scene.

“Everybody’s got a vibe. Within that vibe there are tribal rhythms that come all the way from Africa, which was a language within us,” Henderson said. “So I think that hip-hop artists here, especially black hip-hop artists, they hear Africa. Africa is still calling. They hear it in the music...and this is why they’re trying to steal our music.”

Henderson said that it was important for musicians to recognize the history of the music from which they are sampling.

“If I was a writer and I grew up reading James Baldwin, it would be okay for me to use things that inspire me and are uplifting to the people, but I would need to give credit,” Henderson said.

Walters added that contemporary musicians who sample from Clinton should be aware of his legacy.

“To me, if contemporary musicians are interested in George Clinton, that’s a way that Clinton is inviting them...into this space that he’s created with his music,” Walters said. “If you behave in that space as a guest, you can learn as much as you can about your host.”

In both his memoir and the discussion, Clinton emphasized the importance of being open-minded to new musical influences; he said he was collaborating with rapper Kendrick Lamar the night prior to the event.

“I’ve learned that whenever I feel like saying [‘that ain’t music’], that’s the music you better go get,” Clinton said during his talk with Riley. “Older musicians say ‘that ain’t music’ because they feel threatened. I realize that when I feel like that, I should run and get that music quick, cause that music will be staying around for a couple more years.”

Riley commended Clinton’s open-minded outlook, adding that a pushback from the older generations is a common thread in music’s history, especially with rap.

“[Clinton’s] embrace of that is eclectic,” Riley said. “He harvests a lot of different influences and puts them to use in his own original material. He’s my musical hero because he has his ear to the ground.”