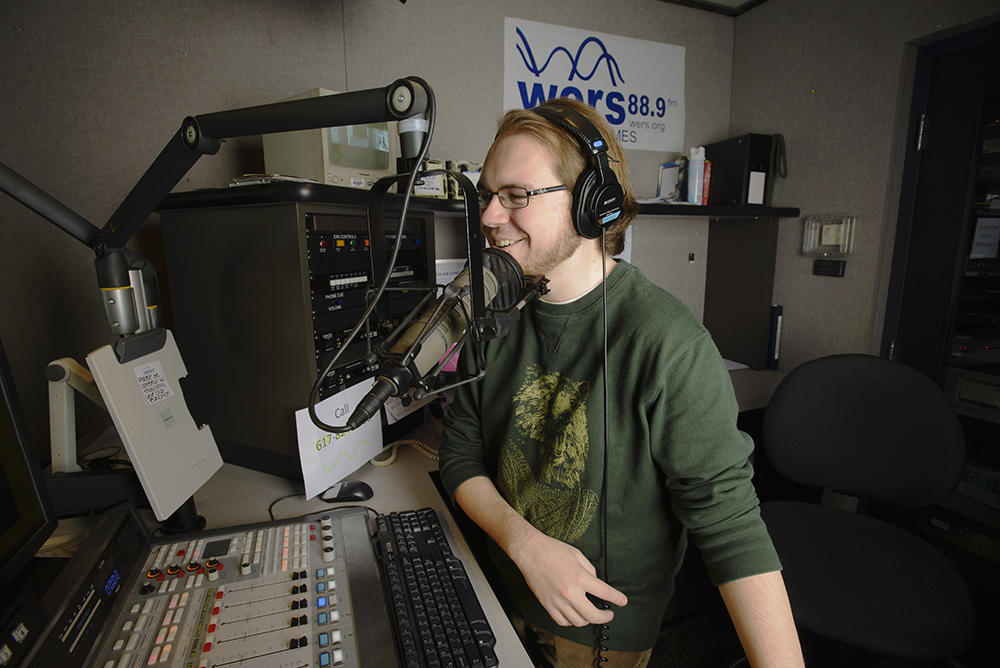 The biannual fundraising week, which runs from Oct. 18-26, features live performances from artists, which range from well-known indie-pop musician Lykke Li to local bands like The Color and Sound and Friendly People.

Kevin Cooney, the membership coordinator of WERS, said that during Live Music Week, the station hums with energy more than any other time during the year.

“There are so many different people in and out—the bands, the professional team, the volunteers—there’s a lot going on,” Cooney said.

According to senior Virginia Wright, the live mix coordinator, there was a stronger focus on local bands than in past years.

“We tried incorporating more local artists that we don’t normally promote,” said Wright, a visual and media arts major. “I tried really hard to get bands that people haven’t really heard of but should listen to.”

Yuna is one of those artists. A Malaysian singer-songwriter and practicing Muslim who played at WERS on Tuesday, her music combines elements of electronic and pop.

“One of [Yuna’s] messages is how you can be different, and, at the same time, be in the creative world,” said Dora Gonzalez, the development assistant of WERS.

According to Casey, the nature of the performances differ depending on the artist and the amount of equipment that the studio space allows. Yuna’s live performance, for example, was stripped down in comparison to her recordings, said Wright.

Wright chooses and coordinates the artists for live sessions. She said she goes to many local shows and often incorporates her own music taste into WERS’ lineup.

“[Live Music Week] is a way to highlight local music and live music,” said Casey. “To provide a platform for artists to perform live on the radio, because there’s very little of that.”

“Success starts in the heart of your own community,” said Simeone, a visual and media arts major. “If you can’t support your own local artists, you don’t have the right to support people you can’t call your own.”

Simeone added that part of Live Music Week lined up with Family Weekend, resulting in parents wanting “to help out whenever they could.”

“One of our DJs’ mom shows up randomly and says, ‘Hi, I’m looking for my son,’ so we sent her to the live booth,” said Simeone. “She sat down with him and did a pitch. They’re both huge fans of Broadway, so she even rattled some facts off the top of her head.”

Cooney said that Live Music Week also gives the station the opportunity to get involved in the Boston community. Since last spring, WERS has brought in volunteers from the Greater Boston area to help with answering phone calls, according to Gonzalez.

“Most public radio stations have a call center, but we don’t do that,” said Cooney. “We have people come in and volunteer, because in addition to it being a cost, [a call center] also takes away from the experience.”

Tara Chiacchieri, a listener and volunteer, answers calls for pledges and takes donations.

“It’s been great to talk to other listeners on the phone and hear the other people who love the station,” Chiacchieri, 34, said, adding that she has been listening to WERS for the past few years during her commute to work in Waltham.

“It’s great to see people to who like WERS and to connect with people outside of Emerson,” said Gonzalez, who is a graduate student in Emerson’s communication management program. “We get to see that our work is doing well, because people like to come in and help.”

Gonzalez said that WERS sets different goals for each hour and show, but has met its goals for number of donors since Saturday. She declined to say the amount that was raised so far.

During Live Music Week, WERS offers donators the chance to win a 7-day trip to Costa Rica, an opportunity that is emphasized during the station’s intermittent “pitches.”

“We shake things up a little,” said Benjamin Fuhrmann, a freshman visual and media arts major and an on-air DJ. “This isn’t just another week when we ask you for money.”