Not your average history lesson: ArtsEmerson debuts new show We Are Proud to Present... 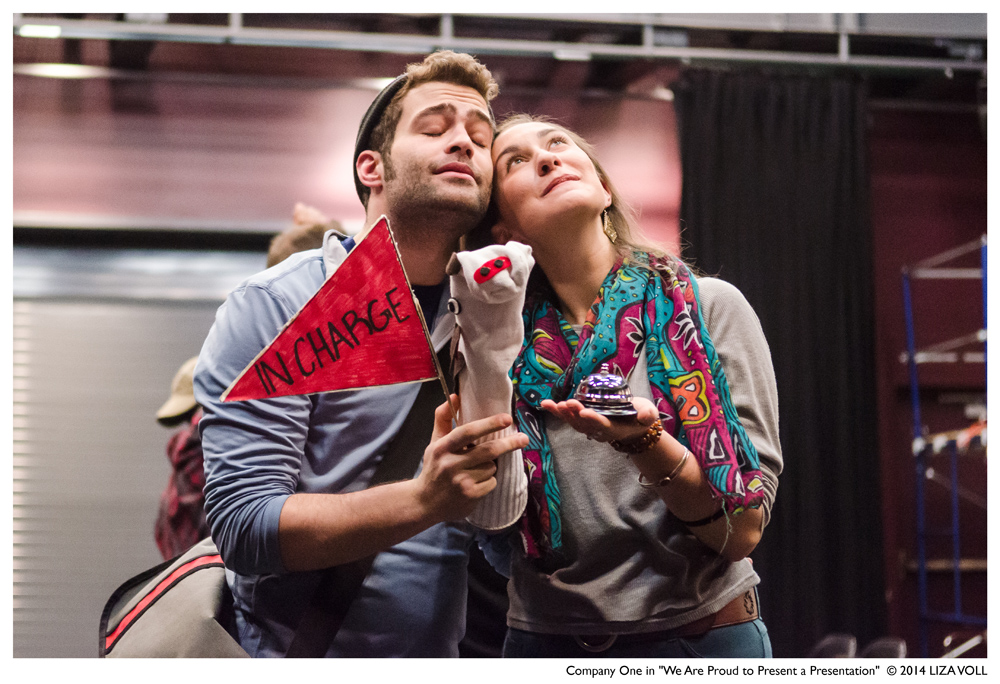 Audience members of We Are Proud to Present... are taken through a jarring, uncomfortable, and confusing experience — and it’s completely intentional. Viewers experience a whole range of emotions — from happiness, to anger, to sadness, to shame — as they watch the actors grapple with sensitive issues such as race and ancestry in a very real way.

Written by Jackie Sibblies Drury, We Are Proud to Present a Presentation About the Herero of Namibia Formerly Known as Southwest Africa from the German Sudwest Afrika Between the Years 1884-1915 features a group of actors who attempt to create a presentation about the first genocide of the 20th century, but become personally involved as tensions between them rise. The production is a result of a collaboration between Company One, a resident theater at Boston Center for the arts located in the South End, less than a mile from Emerson campus, and ArtsEmerson.

The meat of the play is found not in the plot, but in the experimental, nontraditional way that it is structured. Actors break the ‘fourth wall’ of theater immediately, letting the audience catch them in a middle of a pre-show warm up, and making direct eye contact as they pass out pamphlets that tell the history of the Herero tribe of Namibia, formerly known as Southwest Africa, and Germany.

Then the actors begin their mock presentation by clumsily setting up a rolling cart with a projector that is aimed onto the back wall. The PowerPoint is crude and poorly designed, and they’ve gotten one of the dates wrong on a slide. One actor rushes to fix it. The presentation continues in this silly, fun, and light manner, but when it ends, the actors begin arguing amongst themselves, dramatically shifting the atmosphere of the play.

“One of the great parts for me as an audience member is feeling the tone shift in the room from comedy to something much more bleak, and much more disturbing,” said Ilana Brownstein, who assisted the process of selecting the work for Company One’s lineup. “In reading Jackie’s play, it was very clear from go that she was doing some fascinating things by toddling between vaudevillian humor and moments of great silliness, and then things turn on a dime.”

Summer Williams, the director of the production and Company One founding member, said she has seen one person in the audience laughing hysterically while the person sitting next to them is seething mad. Audience reactions vary, but by the end of the performance, she said, each person leaves the space feeling affected.

“It’s my job to make sure it was perfectly hard to follow; that everything from the moment you walk into the space feels a little weird, a little different, a little chaotic,” Williams said. “It’s a very moving experience, people are usually stunned into a very quiet space, or really anxious to get out of the room at the end, or crying—it’s a full gamut.”

We are Proud to Present… blurs the distinction between character and actor, since the ensemble is dressed in street clothes, defined by skin color instead of character names, and bathed in the house lights of an intimate 150-seat black box theater.

“There’s not much for them to hide behind,” Williams said. “It was great when we were in rehearsal when it was just us; it was interesting when we introduced 100 new people into the room and they had to get used to standing just as naked in front of those 100 people.”

That vulnerability and discomfort requires both audience members and actors to directly face the problems that the play presents—issues of race, equality, and human rights—no matter how awkward that may be.

“A lot of times, we don’t enter into these thornier social subjects because they seem intimidating, and theater allows a way in that feels more life sized,” Brownstein, who is also the director of Company One’s New Work program, said. “When we can put ourselves into the story … it demands an emphatic response. I think that cultivating that kind of empathy and ability to enter into difficult conversations is really important for all of us.”

By the end, We Are Proud to Present… escalates from light joking among the actors to two white males forcing a mask onto a black male, tying a noose around his neck, and pretending to hang him off of the set’s scaffolding. Suddenly it feels like less of a play and more of a social experiment gone awry, like Philip Zimbardo’s famous 1971 study, in which subjects that pretended to act as guards and prisoners in a mock prison became so wrapped up in their roles that the study was called off early due to violence and rioting.

The last few minutes of the play largely consist of improvisation that depends heavily on the energy of the audience, and features Actor 4, a black man, connecting with a few select members of the audience by staring them in the eyes and pleading ‘why?’. Then he exits, leaving the audience in a stunned silence.

Ramona Ostrowski, the staff dramaturg, said that some audiences don’t clap; others will sit for a couple of minutes in silence, waiting for someone to begin the applause.

According to Brownstein, the play ends in a very unsettled place purposefully.

“The space of the black box; that room where everyone has been together in, and has experienced those series of events, remains sacred,” Brownstein said. “It ends in a nontraditional way, but we also are very aware that the play stirs up a lot of feelings.”

Those thoughts and feelings are culminated in a post-play discussion held in the lobby, led either by Brownstein or Ostrowski. The talk, according to Brownstein, “provides the audience a medium to process what they have just seen”. The talk can range from questions about the playwright, director and actor, to reactions and opinions about race and society.

Brownstein, a faculty member of Boston University’s School of Theater, stressed the importance of students in particular to see work such as “We are Proud to Present…” because it asks them to encounter a difficult story in history, and find new ways to talk about them.

“We should be able to go to the theater and have this experience of sitting in a room with a bunch of different people, a bunch of different voices and experiences, and allowing that to shape what we take in the art,” Williams said. “It’s critical to Emerson students to see this work … If you see an atypical piece of theater earlier, it will open you up to so many different experiences.”

Ostrowski, the moderator of the discussion, agreed that the work is important for students to see.

“[The characters] come in with this beautiful optimism, even though it quickly reveals itself to be total naivety,” Ostrowski said. “When you’re in school, it’s sort of this special time for you to work on your craft, whatever your craft be, and so I think a lot of students can relate to the intentions here, and the desire to create something that will change the world.”

We Are Proud to Present… runs until Feb 1, in the Jackie Liebergott Black Box at Emerson’s Paramount Center. Tickets with an ArtsEmerson membership are priced at $15.