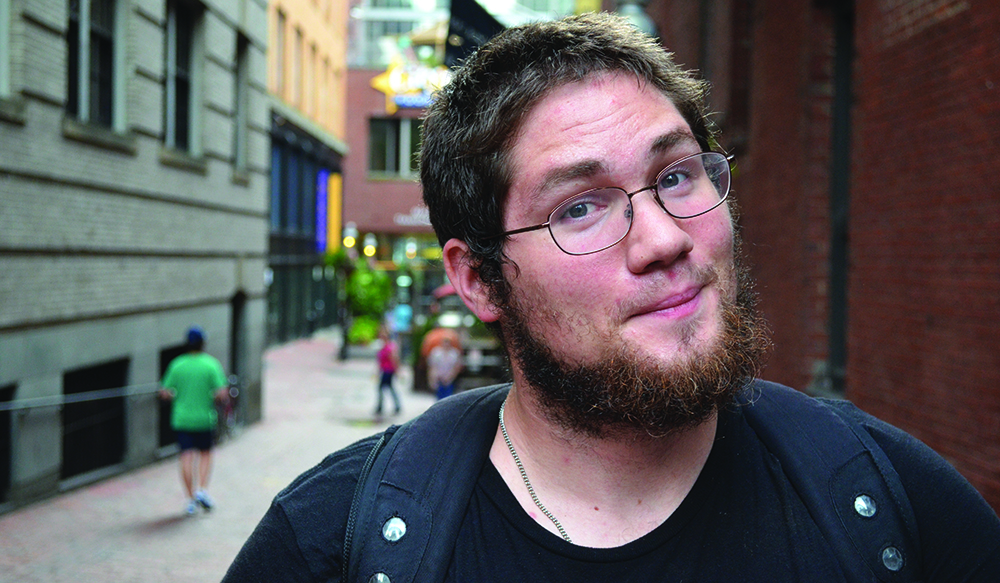 Most writers aren’t exactly keen on letting their audience in on their process. First drafts are meant for editors only, and show-and-tell is usually left for the finished product, not the hard work that goes into preparing it. But, senior writing, literature, and publishing major Donnie Welch doesn’t see it that way. A decorated slam poet, Welch rewrote the script by debuting an initial draft of a poem he wrote online to an audience through a live stream feed just last month.

The piece, entitled Leaving Dynamite, was billed as a monologue “exploring the recent trend of young American men to execute extreme, public acts of mass violence.”

Inspired in part by the recent Boston Marathon bombings, as well as a mass shooting that took place in New Orleans around the same time, Dynamite’s purpose was not only to approach “what motivates these sort of events, but also the public perception behind what occurs and how that affects exposure,” said Welch.

At the heart of the poem was the desire to really dig into what surrounds these tragic events.

“I felt that in order to stop things like these from happening, we have to understand why they happen,” said Welch. “The mission behind Dynamite was to present possible reasons why and to see if we can do something about them.”

While presented in the unusual poetic perspective that Welch brings to all of his work, what really set Dynamite apart was the way he performed it. He recruited director and 2013 Emerson graduate Alex Ates, and the duo used social media — a platform they felt was well adapted to expressing art and engaging an audience — to workshop the poem.

The actual platform in question was Howlround, a livestream feed site run by the Emerson Center for the Theater Commons. The stream, filmed at an arts high school in Ates’ hometown of New Orleans, went off without a hitch, reaching an audience of nearly 50 people at its peak.

“As we suggested, the piece was really a sort of rough sketch, so we wanted to sort of capture what goes into the process of creating something like this,” said Ates. “We were also hoping to engage the audience and promote instant feedback through the use of the Internet.”

While the two felt they were successful in doing so, the feedback they did receive wasn’t exactly immediate.

“There was definitely a positive response to it, which was cool, but there wasn’t a lot of active feedback from the stream,” said Welch. “It was more personal things like emails and texts.”

Welch and Ates have a bit of a history. Fast friends during their time spent as resident assistants in the Little Building, they eventually collaborated during a Shakespeare Society event at Emerson a few years back when Welch was brought in to read some of his work. Ates said he was initially in awe of his talent.

“He has this ability to approach topics that most people don’t really know how to articulate very succinctly,” said Ates. “He is able to express what needs to be said in a way that just resonates.”

Moving forward, Welch and Ates have already begun edits on the piece. With a deadline set for October and graduation on the horizon for Welch, plans are tentatively set in motion to further develop Dynamite.

“I’m free in the spring to travel and really give this piece the attention it deserves,” said Welch. “But I don’t really know what my next step is.”

As for their respective futures post-graduation, Ates intends to continue working with artists in some capacity in New Orleans, while Welch’s next move is a little unsettled, but not without options. A budding poetry career aside, Welch is now a recording artist and touring musician who collaborates with indie-folk artist Freddie Wilson under the pseudonym Welch & Penn.

Combining folk and beat poetry, Welch said the group originally released music together strictly as a means of funding a tour they undertook. The success of said tour led to some recording opportunities in Nashville.

“Hanging out in the studio especially was crazy,” said Welch. “I’d never really been in an environment like that and I’d never really thought I’d end up there as a poet.”

The same went for putting together Leaving Dynamite.

“I don’t think I’ve experienced anything more difficult than trying to make theater,” said Welch. “But putting out the live stream was this moment of total elation.”