Girlie Project stands out with stand-up 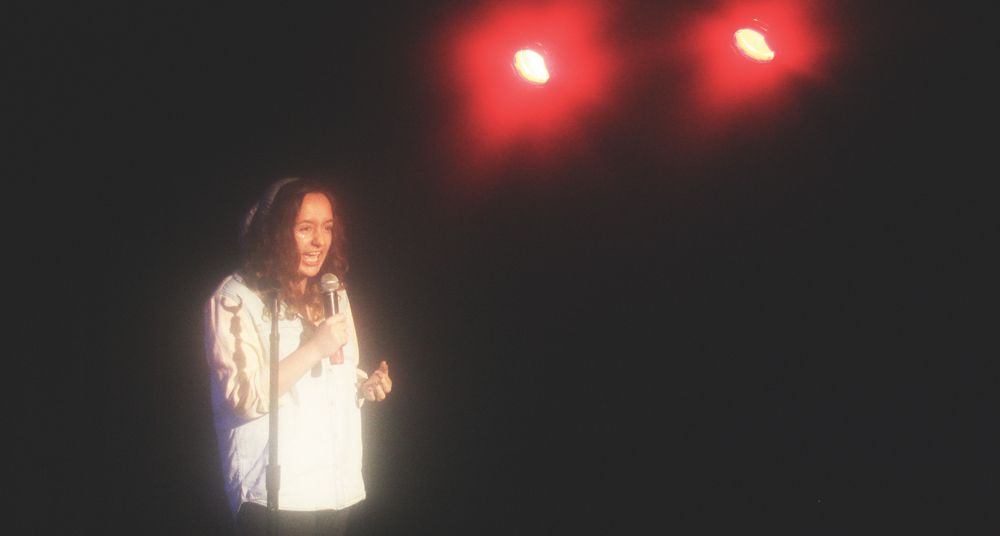 On Thursday, Oct. 3, under the colored lights of the Cabaret, John Bickerstaff, a senior visual and media arts major, stood on-stage and gave a knowing laugh.

“You know, I learned something this summer,” Bickerstaff said. “A giraffe’s tongue is 20 inches long.”

The audience hummed with anticipation as Bickerstaff paused.

It was a surprisingly raunchy joke for a school-sponsored event, but it received a lot of laughter.

“I just like talking about things that I find funny or seem odd to me,” Bickerstaff said prior to his performance. “A lot about my sex life, personally.”

Though not all of the performers delved quite as deeply into their personal lives, they did share odd things they had experienced with honesty and candor. Some joked about Boston stereotypes, the Emerson community, and their friends—subjects that many students can relate to.

The night was put on by The Girlie Project, an on-campus sketch comedy troupe, but it incorporated the entire comedy community at Emerson.

Non-member performers were able to participate, and Jamie Loftus of Emerson’s sketch comedy group Chocolate Cake City was featured as a quick-witted host, who opened the show with an anecdote about Facebook friending people who share your name. She said she used to talk to a male Jamie Loftus who lived in England and propositioned her for sex when she mentioned she was traveling to his area for a trip. Loftus ensured the show ran smoothly by introducing each comic and providing a funny quip.

Emmy Hauptman, a sophomore writing, literature, and publishing major and the president of The Girlie Project, joked about her childhood.

“I was an awkward, weird kid,” Hauptman said.

During her few minutes on stage, she talked about how she reenacted the musical Rent with her American Girl dolls and wrote a screenplay about a monster she naively named “Shat.”

Hauptman said there was no way she would have performed stand-up comedy if it wasn’t for The Girlie Project.

“It helped me to break out of my shell in terms of finding a group of people,” Hauptman said.

Even an hour prior to the show, Hauptman was in her element, jokingly debating with fellow cast members about Saturday Night Live’s recent Girls parody. (According to Hauptman, it was spot-on.) The comedians were in high spirits, singing pop songs and goofily dancing to the pre-show music

Sam Crichton, a freshman visual and media arts major, agreed that being a part of The Girlie Project helped her find a niche at Emerson.

“I’ve never done [stand-up comedy] before, but I’ve always wanted to,” Crichton said.  “I didn’t expect to do it in my first six weeks of college, and I’m excited and nervous—but mostly nervous.”

When Crichton stepped onstage, she admitted to her jitters, mentioning that she has a tendency to yell when she’s nervous. She joked about the difficulty of making friends at Emerson and starting conversations with new people.

“It’s like I’m having a lot of conversation one-night-stands,” she said onstage.

For Crichton, The Girlie Project seemed to be the least intimidating out of all of the sketch comedy groups at the organization fair and the auditions.

“It was different from all of the comedy troupe auditions,” Crichton said. “I stood in front of them and they were like no, no, no, you can sit down.”

Crichton said she prepared a sketch she had written called “Bonnie Hunter,” a Disney commercial parody about a seventh grade girl who lives a double-life as a bounty hunter. The sketch left an impression on members, who still recall the audition, weeks later.

All of the members of The Girlie Project said their audition had a laid-back, casual atmosphere.

The result is a comedy troupe reminiscent of a family, or at least, a tight-knit group of best friends. During the show, they supported each other enthusiastically, shouting words of encouragement from the front row.

Sean O’Connor, a sophomore marketing communications major and one of four male members of The Girlie Project, fed off the energy of his fellow comedians as he performed. During his time in the comedy troupe, he’s perfected his impressions of Bill Cosby and “existential crisis bro,” a character he’s created through observation of his friends.

O’Connor said despite the overwhelming amount of estrogen in the group, being a part of The Girlie Project has been a positive experience.

“I have to be honest with you, sometimes it’s confusing,” O’Connor joked. “I just say smile and nod, and it works out. I try to keep the sports references at a minimum.”