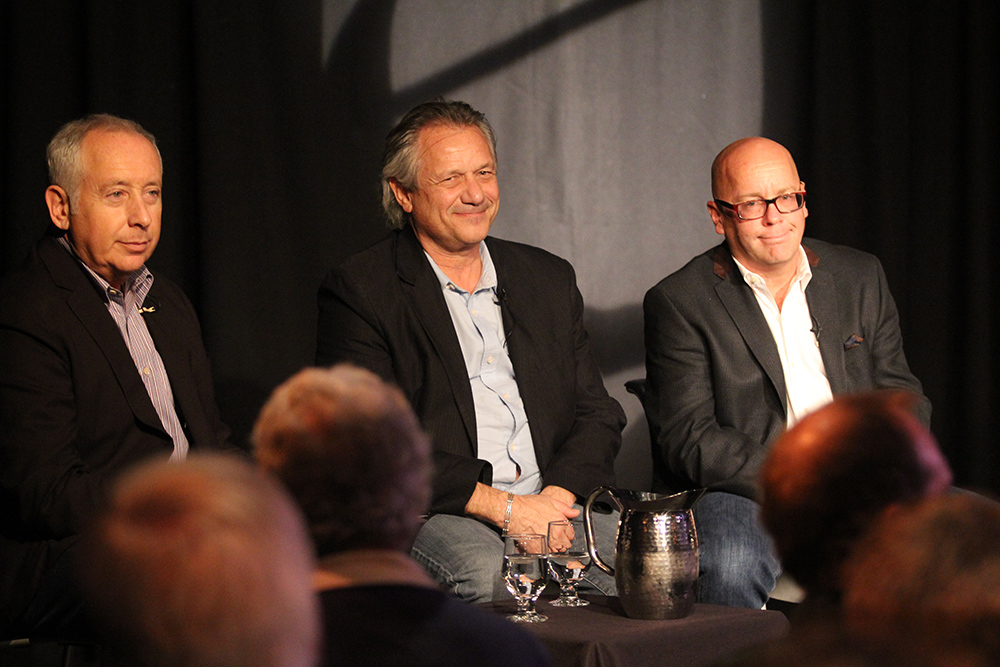 It seems like ages ago when buying physical CDs or watching favorite shows without flipping open a laptop were common occurrences. Many Emerson students will enter the entertainment business after graduating, and it’s easy to wonder how technology will affect their futures. A panel of five experts in the industry explained how in a lecture titled Netflix, Hulu, Pandora and Spotify: How Digital Distribution Channels Are Changing the Television and Music Industries on Thursday, Oct. 24 in the Cabaret, and gave audience members a glimpse into a surprisingly bright future.

Leading the discussion was Daniel Black, an entertainment attorney with experience in television and motion picture studios, who explained that each speaker was on Emerson’s Board of Overseers.

“We want to create opportunities …where we get to interact with students and provide whatever expertise and experience we have,” Black said. “Use us as a resource.”

After introducing the four other panelists — Lisa Dollinger, Daniel Cohen, Kevin Bright, and Gary Krantz — Black launched into the discussion.

One thing was clear: the changing industry could benefit new, young professionals.

“There are more opportunities than ever before,” said Bright, an Emerson alumnus and executive producer of the highly successful TV series Friends.

Daniel Cohen, executive vice president of Disney ABC Domestic Television, witnessed the expanse of opportunities in his own workforce.

“Too many students think that there only four jobs: producer, writer, director, and actor,” he said. “But there are 1300 different jobs on Walt Disney Studio’s block, where I go to work every day.”

Gary Krantz, president and CEO of Krantz Media Group, asked audience members if they ever stay for the movie credits.

“The credits take a lot longer now than they used to,” Krantz said, pointing out that there are many jobs both in front of and behind the camera.

Before getting employed in the entertainment industry, however, it’s important to understand how it has changed. Bright said viewers’ tolerance levels have decreased because they always crave fresh content. Cliffhangers are becoming increasingly more important. If they work efficiently, they compel a viewer to watch the next episode.

“Netflix is home of binge viewing, and it works well for them,” said Cohen.

Netflix does more than provide a way for viewers to immerse themselves in their favorite television series. Bright mentioned that its emergence has allowed the television community to reach specific niche audiences that had previously been untapped.

Similarly, the radio and music industries have seen advantages from the changes in technology.

Though traditional FM/AM radio is dipping in popularity, online radios have created major opportunities for music listeners by allowing them to customize their listening experiences.

“This is the golden age of radio,” said Dollinger, a communication and marketing specialist with over 20 years of experience building brands and managing entertainment personalities.

Due to the increasing importance of cell phones and cars, she said today’s radio industry is all about being connected, and industry professionals are rushing to make the leap from traditional to technological.

“Right now, there’s a race to the dashboard,” Dollinger said. With the development of innovative technologies that allow people to do things such as order movie tickets and make restaurant reservations from their cars,  companies are looking to take advantage of what the dashboard can do.

When it comes to cars and radios, according to Dollinger, these are the Wild West days.

Though it’s easy to think that the fairly recent emergence of applications like Pandora, Spotify, and Songza deteriorate the radio industry, Dollinger points out that these “jukeboxes” are personalized radios in themselves. She said instead, they validate the powerful value of radio.

“I was half expecting to leave feeling discouraged and like these new platforms were destroying media,” said Kara Dodd, a junior marketing communications major who attended the event. “But I left feeling excited to see where platforms like Netflix, Spotify, Hulu, and On-Demand will take digital media.”

Whether they were talking about music or television, the experts unanimously agreed that executives were looking for smart, young people with fresh outlooks.

Dollinger said that Emerson students are especially apt for these kind of positions. Dollinger herself is a Lion. So is her daughter, Callie, a 2010 graduate who found many connections in her field through the strong alumni network.

“If you love what you do, and you have relationships that are built on respect and trust,” Dollinger said, “you need to tap into those when you leave here.”