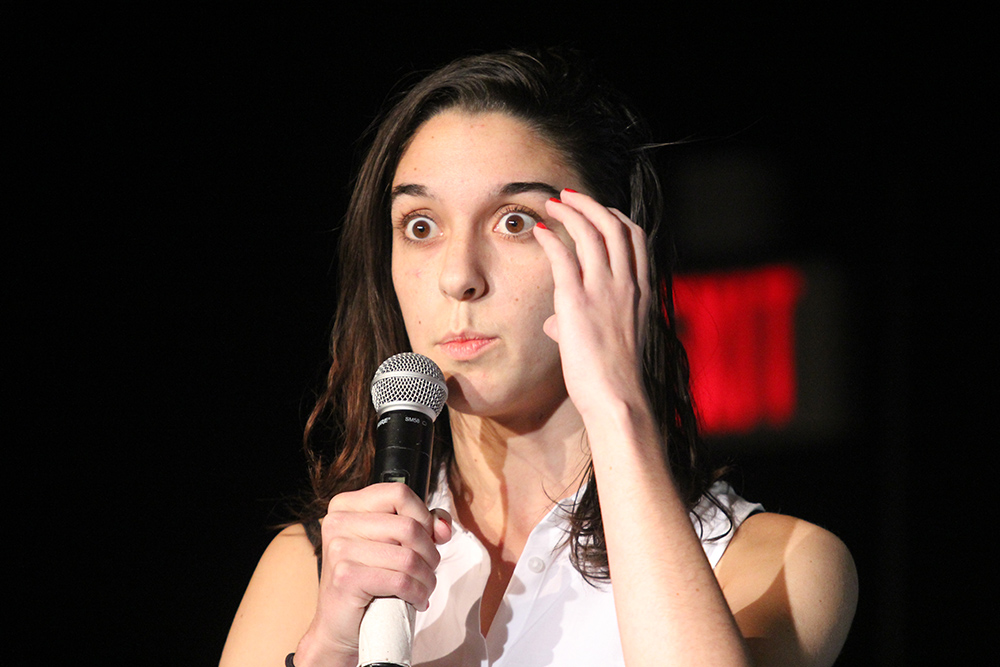 Loftus left plenty laughing in her wake with her dark humor. Throughout her 30-minute set, Loftus spoke at length about her family and even provided a handy slideshow to illuminate her muses. The slideshow broke down the background of the show, demonstrating the complicated relationship she had with her wolf parents and magic spiritual guide, Jeremy the rabbit. Despite having their riverside home destroyed by a fire, Loftus spoke fondly of her family’s weekly dinners amongst the rubble, even if she was now a ghost.

This sort of offbeat humor is typical of Loftus’ act.

“I guess my comedic style is sort of ‘Sociopath-Next-Door,’” said Loftus. “I like to blend stories that are made up with stuff that’s true, and hope that people buy into my half-lies.”

Despite coming across as a natural performer, Loftus freely admits it took her a while to really delve into comedy.

“When I went abroad to the castle my sophomore year, I spent the whole time going to comedy clubs in Europe to sort of psych myself into trying it,” said Loftus. “The last night of my first semester there, I did an open mic, and it went much better than expected.”

While her jokes during her first forays onto open-mic stages were more straight-forward narratives, Loftus quickly became comfortable enough to subvert her formula by adding a surrealist bend on reality. Now, her act revolves around delivering dark material in the “most adorable” way possible, as Fantasy proved.

“I thought it was great, very dark in the beginning, but as it went on the tone shifted a bit and became more relatable, which led to more laughs overall,” said David Carfagno, a junior visual and media arts major who attended the show. “I loved it all, though.”

Good thing, too, as the stakes for Murder Fantasy were raised a bit higher than the average stand-up set. In fact, one could say Loftus’ graduation status rode on its success.

“When I was putting the show together, I got to work with this awesome advisor [professor Andrew Clark],” said Loftus. “This was my honors thesis, so I had to do the show and I have to write a paper to graduate.”

Those enrolled in the honors program are required to write a lengthy final research paper, or produce a creative project, on a topic of their choice to complete the coursework necessary to earn their degrees.

Having Clark as a playwriting professor pushed Loftus to add performance elements to the show. The culminating moment of the show, featuring Jeremy the spiritual guide’s untimely explosion in a microwave, was created at his suggestion, she said.

“[Clark] pointed out that since a lot of my stuff is made up, I should build a show that had some sort of weird climax,” said Loftus. “He really wanted there to be some sort of conclusion.”

As a veteran member of on-campus comedy troupe, Chocolate Cake City, and contributor to the Anti-Joke Comedy Collective at Emerson, Loftus has become a key member of the Emerson comedy scene. She said her experiences with other Emerson comics have been a vital part of her development as a comic.

“The Emerson comedy scene is really cool. It’s a great jumping-off point and everyone involved is very supportive,” said Loftus. “Ever since I got involved, I feel like it’s just continued to grow, too.”

In two years, Loftus has gone from open mic newcomer to one of the leading comedic talents on campus. She hopes to continue this success once she leaves Emerson this December, already planning far into the future.

“After this summer, I’m hoping to move to New York to pursue my comedy further there,” said Loftus.

Hopefully, it goes better than her last family vacation, or as she dubbed it in the show, “The Loftus Family Farewell Tour ‘08.”