Live for the applause: Dragtoberfest 2013 glams up Cabaret 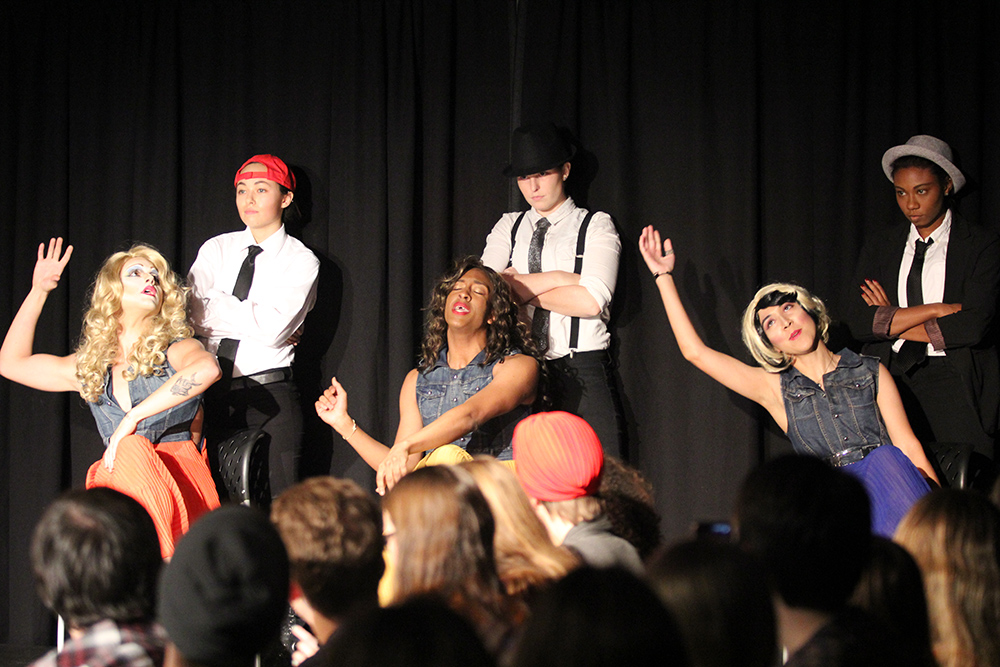 Star projections in purple and blue littered the walls on either side of the catwalk as thumping trashy club beats rattled through the room. Soon the lights were dimmed, and guest host and professional drag queen Miss Sapphira Cristal burst out onto the stage with a glamorous performance of “Minnie The Moocher.”

After a few false starts, that is.

The slip-ups were handled with class though, and with that, a theme for the show started to emerge. Mistakes be damned, this thing was going to be extravagant.

For the 19th year running, the queens took over the Cabaret on Oct. 11 and repainted it in their own glamorous image for Dragtoberfest.

This was Cristal’s fourth time hosting and after her number, the audience was treated to a performance by reigning queen The Fame — a.k.a. junior visual and media arts major Darian Carpenter — on the Dragtoberfest stage, with a routine that started with Miley Cyrus’ “We Can’t Stop” and ended with Lady Gaga’s “Applause.”

For Carpenter, the stage in the Cabaret was the first place he was able to channel his passion.

“Even as a kid, I always liked to impersonate female celebrities,” said Carpenter. “But Dragtoberfest gave me the first chance to exaggerate and really sell a performance to an audience.”

Following those two powerhouse performances was the actual competition. Featuring four impressive acts from some of Emerson’s brightest drag stars, the stage was lit up by characters ranging from a 1930s lounge singer to a ship crew competing over a Japanese beauty.

Not to be outdone, the Emerson Alliance for Gays, Lesbians, and Everyone’s E-Board performed as well. The group danced and lip-synced to a mashup consisting of late ‘90s boy band choreography and the inherent sassiness of diva-pop trio Destiny’s Child’s greatest hits. The nod to Destiny’s Child was all too fitting: Cristal appeared in at least two Beyoncé offshoot characters among her many costume changes. That level of dedication isn’t exactly shocking, though.

“For me at least, makeup takes about one and a half hours,” said Carpenter. “But sometimes it will take well over two hours.”

It wasn’t all about the kings and queens at Dragtoberfest, though. Toward the end of the show, Cristal got the crowd into the act during a brief Q & A session. Contestants were equally enticed by the promise of candy and by Cristal’s inquiries as to who knew their “history of the gays.” Questions included “What colors on the rainbow flag have been dropped since its original iteration?” And on a more serious note, “What did gays have to wear on their clothing during the Holocaust?”

At the end of the night, there had to be a winner. After much deliberation, and an intense lip sync duet to “Summer Nights” from the Grease soundtrack, a king was crowned. Ricardo Suave—“distant cousin” of Rico Suave of 80s one-hit-wonder fame—snatched the crown away from Fame, making him, or rather junior Jamie Ahlborn, the first king crowned since Cristal took over the festivities in 2010.

Sure, the show was not without its faults: There were a couple of lulls where EAGLE representatives had to go out and entertain, and more than a few musical cues missed their mark, but everyone seemed to work through the pain. Cristal in particular laughed off all the technical mistakes, and even made a series of jokes following a nasty spill she took on the stage. In spite of all the troubles, it was clear by the end of the show that Dragtoberfest 2013 was a hit.

“I was so impressed with the show, it was so professional,” said freshman visual and media arts major Lindsey Norden. “It opened me up to a new element of talent here at Emerson that I’d love to see more of.”

The production’s greatest asset may very well have been its marketing scheme, with colorful posters spread across campus in the weeks leading up to the event. The images were perfectly recaptured on the night’s trusty program. The last item read: “Time for these queens to go home.” And so they did.