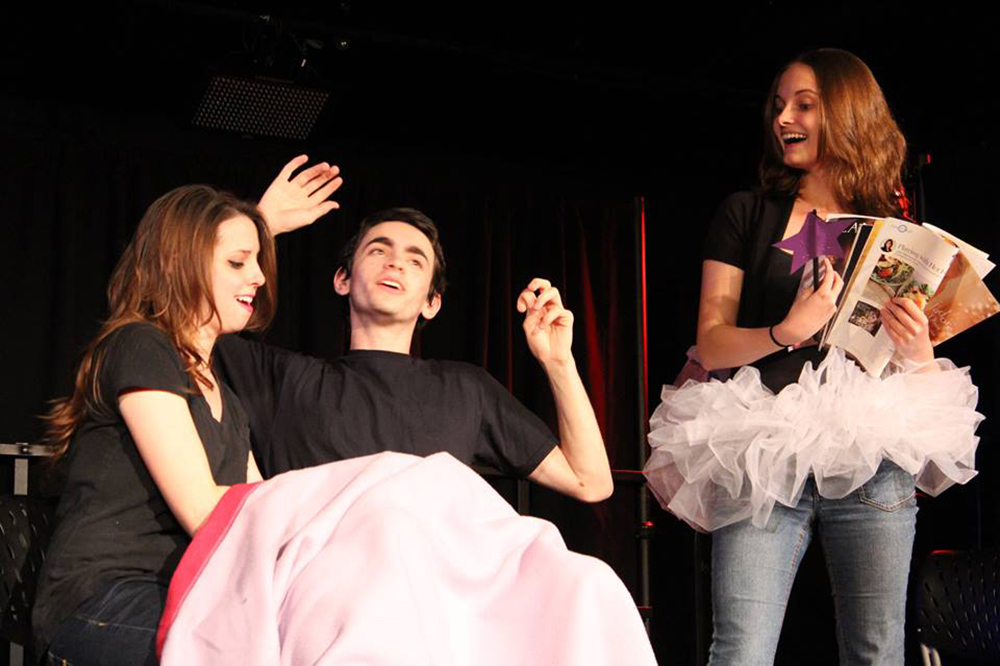 The uncomfortable situation called for the “Cosmo Magazine Fairy,” as played by junior visual and media arts major Laura Cryan. On stage, she was a smiling, slightly demonic creature who appeared to the pair of inexperienced lovers and gave them unhelpful and repetitive sex advice.

“Don’t worry, we’ve got Miley Cyrus on the cover, and that girl knows how to take a cock,” she joked.

The hilariously over the top evening began at 9 p.m. in the Cabaret Theater, when people started cheering loudly from inside and the large doors burst open. In the doorway, ECW members greeted students with intense, excited energy. Dressed in a uniform of jeans and black t-shirts, the comedians clapped, shouted at, and high-fived audience members as they filed into the dark space to watch ECW’s first showcase of the semester.

According to Andy Stocker, president of Emerson Comedy Workshop, the reasons for starting with a bang are two-fold: to rile audience members up, and to let the comedians see who they’ll be performing for. Stocker saw his girlfriend, and his long-time friend file in through the doors as he mentally prepared for his performance. Just moments before, he was running through the sketches with the troupe and Cabaret staff.

“We’re always rehearsing until the very last second,” said Stocker, a visual and media arts major. “If we’re too prepared and we’re too ready for it, we become extremely cocky and you don’t get the real feel of people having a conversation on the stage.”

Stocker served as a host throughout the show, making announcements before and after the performance.

“What you’re about to see is a series of sketches, or gags,” Stocker said in his introduction. “But we all know God hates gags, so let’s get down to it.”

“God Hates Gags” is the title of the show and a play on Westboro Baptist Church’s infamous slogan “God Hates Fags”. The title had little to do with the content of the comedy showcase, and served mostly as an attention-grabber, though it did reflect ECW’s outrageous, over the top humor.

“We all pitch ideas, and ‘god hates gags’ was a pun that we thought was edgy and unique,” said Chris Gillespie, the vice president of ECW and a junior writing, literature, and publishing major.

Gillespie starred in many of the sketches that were showcased, including one about Nicolas Cage haunting a family’s house. In the skit, Nicolas Cage “wasn’t dead, just a huge asshole,” and tortured a couple’s son, convincing him that he was possessed until the family was forced to call clairvoyants. In the end, the family ended up adopting Nicolas Cage into its household, despite his outlandish antics.

According to Carly Kaplan, ECW’s videographer and a sophomore visual and media arts major, many of the sketches are born through ECW’s writer workshop meetings, in which members brainstorm ideas, using warm-up exercises like word association games.

Lily Richards, a sophomore performing arts major, added that often, sketch ideas are based off  experiences people have on an everyday basis.

“It’s about taking things that you find in real life and then doing the ‘what if,’ adding a twist to what you see in everyday life,” she said.

In another sketch, the ordinary situation of choosing a song to set the mood  was hilariously blown out of proportion. The scene began with a guy and a girl just about to hook up, until the guy played YMCA on his iPod and killed the mood. The joke was stretched to its limits as he continued to play increasingly ridiculous songs, from The Cha-Cha Slide to Macarena, until his date stormed off in anger.

Not all sketches were based on ordinary events, though. Gillespie co-wrote the fourth sketch and played around with the idea of authors with initialed names, joking that T.S. Eliot stood for “Tootsie Snufflepuss” and C.S. Lewis was actually “Cocksucker Lewis.”

“Who would think that you could have fun with the names of 20th century authors?” Gillespie said. “But I did.”

The creativity of the troupe paid off that evening.

“That was the funniest I’ve ever seen them,” Weil said after the show ended.

Stocker was pleased with the performance, too, despite experiencing technical difficulties while attempting to show their sketch video.

“We really try to go for it the best we can,” Stocker said. “Obviously some things stumble, some things break, some things don’t work correctly, but we roll with it and we always end on the highest note that we can.”