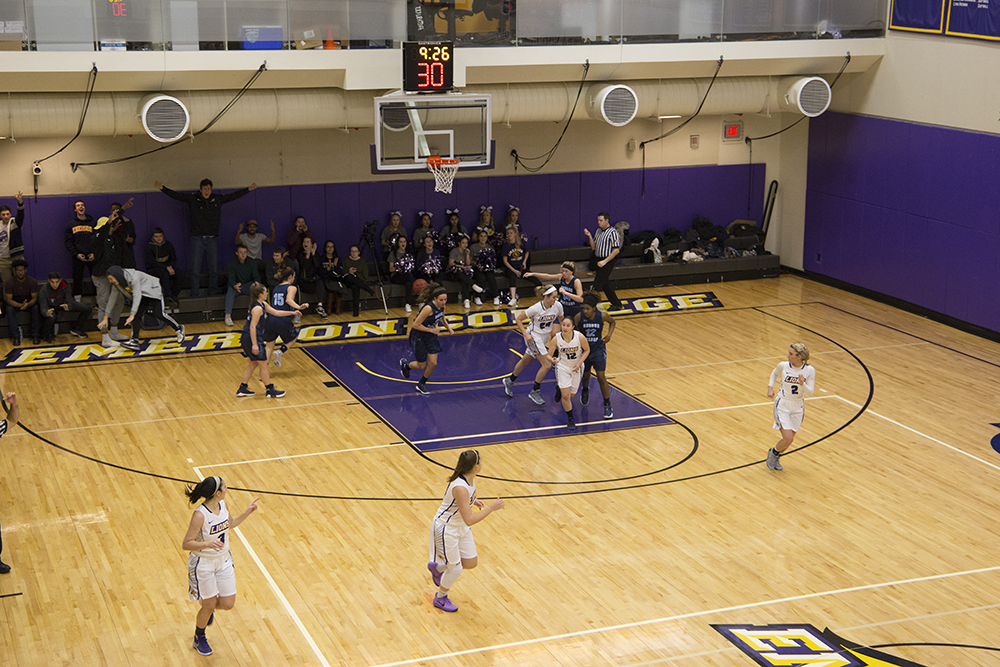 Emerson’s women’s basketball team hopes to reach the playoffs this season by using its versatility and changing the pace of the game, according to head coach Bill Gould.

The Lions lost three players from last season’s roster, including forward Sierra Ducey, who started in every game last year. Elizabeth Horan, the only senior from that squad, drained 54 three-pointers at just over 36 percent, ranking third and fifth in the NEWMAC, respectively.

“You could count on Elizabeth to be a ridiculously good shooter—not only her percentage but also the range at which she had,” Gould said. “I think what we’re going to do instead of one person being really good, if we can get a lot of people to be pretty good, then they still have to worry about our three-point shooting. They just don’t know who it’s going to be, which in some ways could actually make it tougher for defenses.”

With only three players standing 5-foot-10-inches or taller, two of whom are freshmen, Emerson lacks in height compared to the rest of the NEWMAC this year. Those who earned playoff spots in 2017 enter this season averaging six players at least 5-foot-10-inches, according to team rosters, while those who didn’t average two.

Gould said his group can make up for its lack of height.

While Emerson is traditionally a man-to-man team defensively, Gould said he plans to employ more of the 2-3 zone as well as a 1-3-1 three-quarters trapping press in hopes to speed up the game.

“We have good athletes and we have aggressive players who are not afraid of activity and contact and physicality,” Gould said. “We want to increase the tempo of the game and our press that will help us do that.”

Conditioning during the offseason was important for the Lions to combat the physical demands of playing faster. Senior guard Eastin Ashby said the team has done more conditioning in the preseason this year than in the past.

“Everyone’s on board with playing a faster game and being in better shape,” Ashby said. “We do a lot of running drills and a lot of sprinting. A certain section of practice is dedicated to conditioning every time.”

Looking ahead on the schedule, Emerson hosts d3Hoops.com’s national preseason no. 1 ranked Tufts on Nov. 21. NESCAC foe Middlebury finished fourth in its conference and will also face the Lions early in the year.

“The NEWMAC is a very competitive conference, so playing teams like Tufts is definitely going to help, especially having them in the beginning and being able to fall into your season,” Ashby said.

Gould said he has high expectations for the four new freshmen on this year’s roster.

“I think this is a great class,” Gould said. “Top to bottom, it’s arguably one of the best classes we’ve ever had here. These kids really understand the game, they know how to play. They’re not just good athletes who happen to play basketball—these are basketball players.”

One of the freshmen, forward Sam Boyle, is the younger sister of junior forward/center Charlie Boyle, and the pair is reunited after two years playing apart.

“I’m excited; I was the one who tried to convince her to come here,” Charlie Boyle said. “We have good chemistry. We’ve played together in high school too and we don’t have the same position, so we’re really good at passing in and out to each other, we’re good at reading where we are, trusting each other on defense, things like that.”

The elder Boyle is coming off a campaign where she earned Second Team All-NEWMAC honors, and is 371 points away from a 1,000 point career. Boyle scored 311 and 318 points in her first two years while averaging 12.7 points and 6.4 rebounds per game as a sophomore.

Entering his 11th year at Emerson, Gould said he is excited and has high hopes for the season.

“Our expectations are that we’re going to finish really high at the end of the year,” Gould said. “My goal is to host a playoff game and you can only do that if you get to a certain level and I think we have the ability to do that.”

Emerson won its season opener 90-71 over Gordon and will look to defend home court this weekend as it takes on Middlebury and Ave Maria at its annual Tip-Off Tournament.