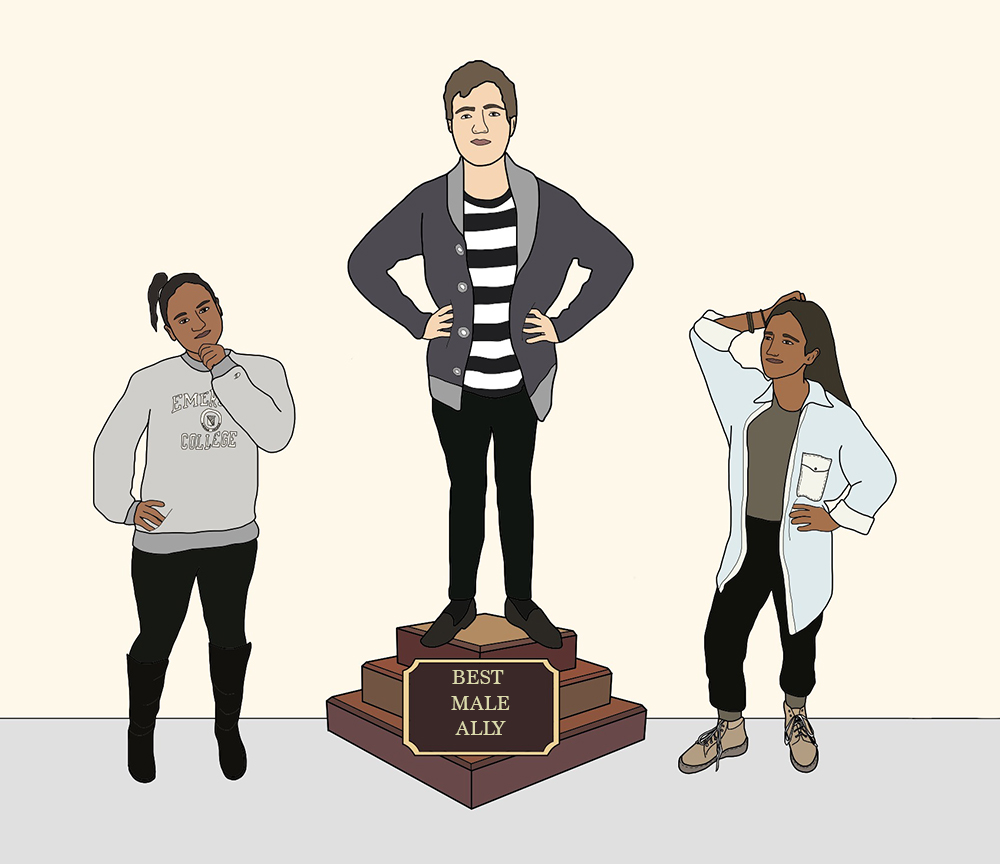 It was 1 a.m. on a Saturday night in January, and some of my friends and I were strewn across pillows on the floor of my friend’s apartment in the wake of a typical night out. Inevitably, the conversation turned to Trump and his supporters.

As someone who woke up to the result of the election feeling like it was a nightmare, it was a balm to hear the two boys in the room that night—both white, straight, Christian—rant against the rhetoric of hatred, racism, and ignorance that was tangled in Trump’s victory.

The girls in the room began to clap to their words, and I was among them, saying yes, thank you. And then I stopped myself. I—the only person of color in the room—turned to my friends and said, “Isn’t it messed up that every time a white boy says this, we clap, while women, people of color have been saying the same things and no one claps? Just because there’s an expectation?” One of the boys looked at the floor and said, “Yeah, it’s a messed up world we’re living in.”

We cannot ignore that in the United States, white men are the default, the blank slate of humanity. Thus when a white man stands up for a woman, for a member of a marginalized group, that action is valued far more than a member of one of these groups fighting for themselves.

Even I, as an intersectional feminist and Latina, have to check myself when the boy I sit next to in class wears a Women’s March shirt or when the woke white boy from my high school posts on Instagram about immigration rights and the Dakota Access Pipeline. Because, despite my beliefs, I instinctively grant them more credit than I should. This is born out of the same learned behavior that leads me to apologize whenever I am upset or hurt. It is born out of the learned behavior that tried to tell me that I was too flat-chested, too quiet, too clumsy to fit the mold of the Latina.

We need to shift attention away from white cis-men to recognize the voices and narratives of others and grant them the same importance. Otherwise, we not only continue to marginalize those voices, but also continue to praise white men for doing the bare minimum of what others have been doing and saying for far longer. This is not to say that any of these actions by these boys are unwelcome—we still need allies. However, this need should not be reduced to commending those who have no stake for taking part in an argument they can afford to lose.

For an example from the realm of celebrity, look at this year’s Academy Awards, or as The New Yorker so scathingly and accurately suggested, “a cowardly and predictable affair, during which the most famous people in America (save for the one in the White House) came together on an enormous platform and squandered it. They congratulated one another for being inspiring, brave, and progressive, despite the poor example set by their industry.”

Host Jimmy Kimmel’s political jabs were tepid at best, and rather than making a bold, radical statement—the kind his privilege would have protected him in making—he instead thanked Trump because “I mean, remember last year, when it seemed like the Oscars were racist?” Trump’s violent rhetoric allowed Kimmel to dismiss the systematic underrepresentation and racism in Hollywood. Moreover, Kimmel’s repeated insensitive jokes about non-white names, including that of Mahershala Ali (Moonlight), who became the first ever Muslim actor to win an Oscar that night, exposed his disconnect from those actually impacted by Trump’s presidency.

Herein lies the problem. Kimmel is a white man and thus his tame political attacks were granted more credit than they deserved as he failed to stand up against the racism and misogyny of this presidency. What about Iranian director Asghar Farhadi, who boycotted the awards to protest the travel ban? Kimmel took a massive platform, during which he could have made a radical statement (at no loss to him) and squandered it.

We need allies. We need people who care even if they are not affected. And I am glad to have met white boys who are educating themselves, who listen and support us. But they get more praise because white bodies, those of cis-men in particular, are still valued higher. At Emerson, this culture does exist, but it is shifting. It starts in our workshops, when we stop assuming that every character is a white male until specified otherwise; when we listen to the critique of our peers whose experiences may differ from ours. It involves deconstructing the canon of what who we study, who we read, the directors we watch and strive to emulate. When we no longer consider white men to be the blank slate upon which to draw our characters, the mirrors of ourselves, we may make sure that their voices are valued no more than those of people of color and women.

We want to hear from you! Next week’s paper will feature student responses regarding allyship and the value of allies, if any. If you have any personal experiences or thoughts on this issue, please send your short submissions to opinion@berkeleybeacon.com. Please note that submissions for print must be shorter than 500 words, and may be edited for grammar and clarity.