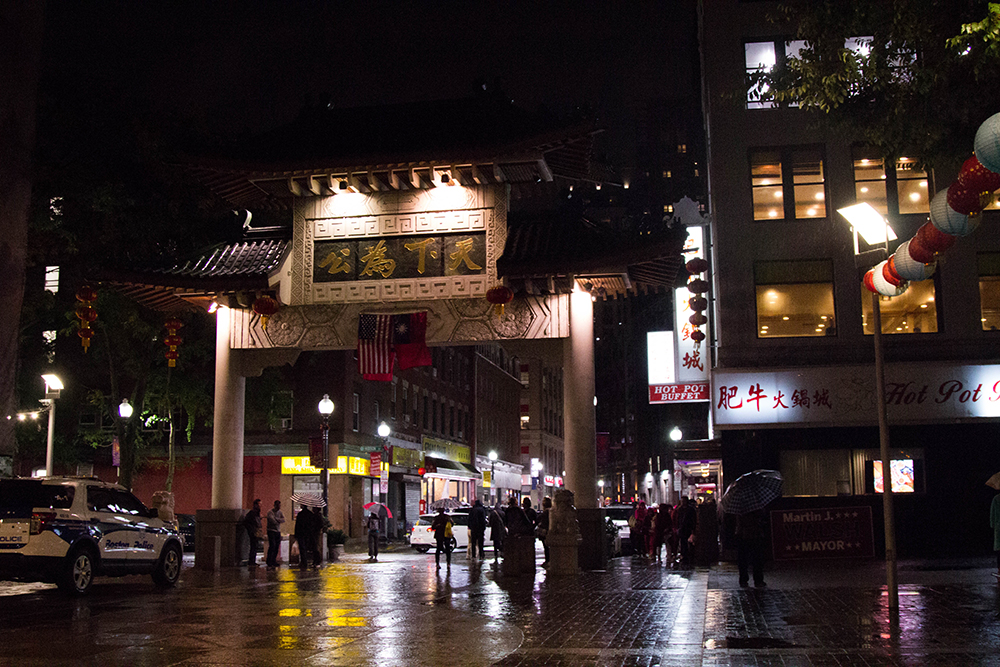 Earlier this month, I found myself in a mass of people marching down the streets of Chinatown. “Chinatown is residential!” a girl in the front shouted. “We don’t want your short term rental!” the crowd responded. They continued to chant, but my mind wandered. I looked around at the one place in New England which, for me, is the closest to my home 7,000 miles away. I saw the shaky buildings, the oil stains on the asphalt road, and the small restaurants on the sidewalk. A girl rushed by, watching the protest with a bubble tea in her hand. An old woman stood in front of an apartment entrance looking confused, while a couple—probably tourists—stood at the crosswalk taking selfies. For a moment I forgot where I was.

The protest was against short term rental platforms like Airbnb, which have completely changed the lives of people in Chinatown. Sites like Airbnb are largely unregulated in Boston. There is legislation in the works to regulate Airbnb rentals in Cambridge, but nothing has gone into effect yet. They’re destroying previously inexpensive communities, and they place the needs of tourists above the lives of residents. Boston should put the needs of residents first, and take more of an active role in regulation of short-term rentals.

Short-term rentals are typically more profitable than month or year-long rentals. Landlords are raising the rental price for their tenants and kicking people out of their homes if they’re unable to afford it. Cases such as these are more common than one might imagine. As reported in the Globe, Chinatown resident Mei Qun Huang was forced to move after her building sold for $1 million.

The issue is not limited to Chinatown; in neighborhoods all over Boston, long-time residents are suffering similar fates. Thirty four percent of the Boston residents fall into the broadly-defined middle class--with an annual income from $50,000 to $125,000, and yet are unable to afford housing. A household in this range is largely unable to affording home ownership in seven of 15 Boston neighborhoods.

Although the rental housing market provides this group of people with more options, the pressures of rising rental costs and college student gentrification make this living situation difficult to manage. It’s bad enough that these Boston residents are unable to own homes in their own city, but because of these other serious issues—it’s getting harder and harder to even find a place to stay. Now, as Airbnb carves out its place in the rental market, the housing crisis is getting worse.

Short term rentals are also changing the very nature of neighborhoods. Those red-brick row houses and those archaic apartments in Chinatown are places where families have lived for generations. Though they may just be tenants, some of them have had their entire generations of their family live there. These historical buildings are more than just tourist attractions, they are also homes. Pushing long-time residents out of their homes to flip a profit isn’t just crude, it’s unethical. They should not have to make way for the tourists.

But people rarely realize that until they experience it themselves. Imagine the apartment your family has lived in for decades suddenly being sold by the owner. This nightmare is a reality for many Chinatown residents, some of whom are left wondering where to sleep, eat, and live.

We need to reconsider the relationship between Airbnb and communities. The concept of sharing homes, meeting new people, and living like a local while travelling is nice in theory. However, the reality of pushing long-time residents out of their homes is not. There needs to be compromise between landlords and long-time tenants, and regulation could be the best answer. By limiting the number of short term rentals in one unit, creating citywide databases of units rented out via Airbnb, and ensuring the hosts must live in their rental homes, we can put the residents before tourists and preserve our community.