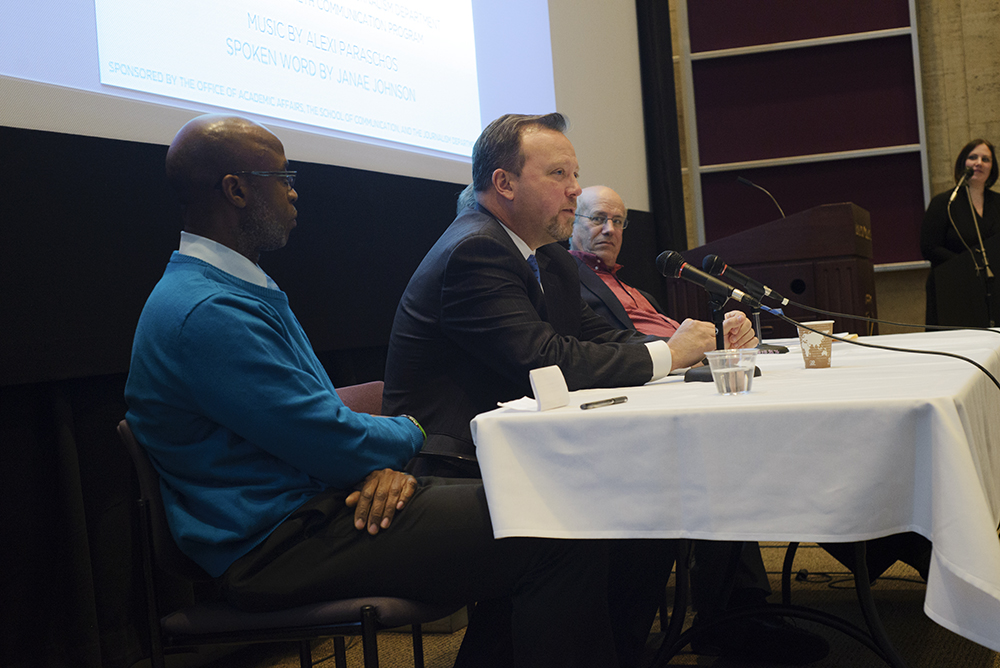 During an event that included music and spoken-word poetry on Nov. 13, the Emerson community discussed the media and public hysteria about Ebola.

Emerson journalism professor Roger House organized and introduced the event, which was held in the Bill Bordy Theater. He said he decided to put on the event to quell student fears about the virus and present facts.

“[The forum] was part of my reaction to the news coverage of the issue. What I saw was a rising level of anxiety and concern and confusion,” House said in an interview. “And I thought, ‘What can I do to help bring out the facts in a calm way, in a rational way, with people who know what they’re talking about?’”

The event, Participating in Ebola Truths and Consequences: The Facts About the Ebola Health Threat, had four panelists — two doctors, journalism professor Jerry Lanson, and a representative from the Liberian Community of Metro Boston. Health Communication faculty member Nancy Allen moderated the forum.

Before the event, organizers asked students to submit questions and about 25 were addressed during the forum, according to House.

A major topic of the panel was the misinformation and subsequent hysteria surrounding the Ebola virus.

“I definitely fed into the same paranoia as everyone else,” freshman journalism major Jack Skinner said in an interview after the forum. “I was in the same boat as everybody else, just like, ‘Oh my god, Ebola is in America? I’m packing my bags, I’m moving to Scandinavia.’”

Since attending the forum, Skinner said he has become more informed about the Ebola crisis, and subsequently more aware of the unnecessary panic of others.

“You get one or two cases of Ebola and everyone loses their minds,” Skinner said.

House spoke about why Ebola has become a hot topic for the public.

“[People] feel unsure about how they catch it, who has it, how they deal with people who might have it,” House said. “So there’s a real sense of personal vulnerability.”

Larry Madoff, a doctor from the Massachusetts Department of Public Health, talked about what he called the human tendency to intensify the severity of public health issues.

“The plague narrative is a powerful narrative...The idea of this contagion community runs deep throughout human history,” Madoff said. “I think the media grabbed hold of this and ran with it.”

The Ebola virus is spread through bodily fluids like blood and vomit, and is impossible to contract from water, air, or food, according to the Centers for Disease Control and Prevention. While Ebola is extremely infectious, the virus isn’t contagious until symptoms become apparent, according to the CDC.

Paul Biddinger, a doctor from Massachusetts General Hospital, discussed the medical, financial, and technological actions taken against the Ebola crisis.

According to Biddinger, Massachusetts General Hospital has spent around $500,000 in equipment and resources and trained approximately 400 staff members for Ebola treatment.

“The risk of an extended outbreak of [Ebola] in the U.S. is zero,” Biddinger said. “We have the public health infrastructure that, if someone got Ebola, we could cut it off right there.”

Biddinger and Madoff discussed the treatment that doctors would provide if there were an Ebola patient in Boston, including isolation and providing the right combination of fluids.

Jane Powers, director of the Emerson’s Center for Health and Wellness, also spoke at the event. Powers discussed precautionary measures Emerson has taken against Ebola, including a four-hour exercise in which staff from the center practiced scenarios of handling a student with the virus.

The event featured a montage chronicling how the Ebola crisis was introduced to the public, music, and spoken word poetry.

Soul singer Alexi Paraschos, son of Emerson journalism professor Emmanuel Paraschos, performed a medley about supporting those in West Africa that have been affected by disease and using education to help the human race. Spoken word poet Janae Johnson recited an original piece on the themes of health, image, ignorance, and awareness around Ebola.

House said he hoped students attended the event so they could learn about a major “medical challenge” of their time.

“Ebola is the AIDS of their time,” House said in an interview. “Ebola is to them what AIDS was to the previous generation. I think it’s imperative that they learn the facts. Ignorance is no protection.”