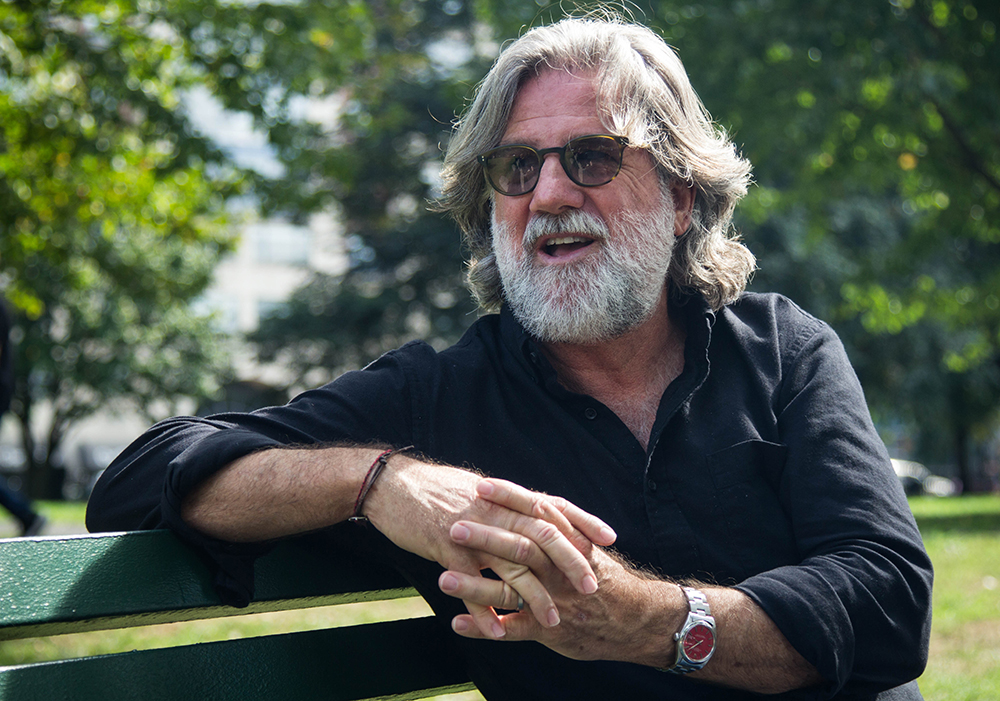 After 30 years working as a photographer for the Miami Herald, Patrick Farrell is taking a year-long leave—he joined Emerson this year as a Distinguished Journalist-in-Residence. He’s won two Pulitzer Prizes in the last three decades: one as a part of the Herald team’s overall coverage of Hurricane Andrew in South Florida in 1993, and another exclusively for his photography for the Herald covering Hurricane Ike in Haiti in 2008.

This semester Farrell is teaching classes on digital journalism and photojournalism. He said he plans to teach documentary photography in the spring.

The documentary photography course will be covering a local neighborhood, and his ultimate goal is to open a pop-up gallery to raise money for a nonprofit in the area. Students will gain experience chronicling a subject in-depth and will work with both photography and video.

Throughout the year, Farrell plans on bringing exhibits and panel discussions to Emerson. He said that even though he’s excited to be teaching, he is fighting his journalistic instincts to help the Herald cover the news.

“Sitting here right now and seeing all the news that’s happening and not being able to contribute to the coverage is a little weird,” Farrell said.

“We do a lot of looking at photographs and talking about what’s going on in them and what works well,” Cody said.

In one photojournalism class, students had the opportunity to Skype with two reporters—Angel Valentin and Frances Robles, both friends of Farrell—who were individually covering Hurricane Maria in Puerto Rico.

Janet Kolodzy, the chair of the journalism department, was on the committee that hired Farrell. She said Farrell was distinguished from other applicants by the Edward R. Murrow award he won in 2016, along with his two Pulitzer Prizes.

“The idea of having someone who’s had that kind of acknowledgement of great work for his journalism was very good,” Kolodzy said.

For Farrell, one image stands out among his Hurricane Ike coverage: a photo of a father loading his dead daughter into a the bed of a coroner’s pickup truck.

“That was the most important picture I shot,” Farrell said. “There’s so much of a story in that one fraction of a second.”

Farrell said he had conflicting emotions about winning an award based off such tragic circumstances, but he believed it had a positive impact on Haiti’s recovery.

“I think the Pulitzer put a spotlight back on Haiti, who was still struggling from this event that I photographed six months earlier, but had fallen off the front page,” Farrell said.

Farrell said his interest in photography started in eighth grade when his sister took him to a camera shop to pick up photos. While he was there, he was intrigued by an 89 cent pamphlet on how to build a dark room, and he set out to experiment with photography.

“I started doing chores around the house and saved money to buy gear to build a dark room and to buy a camera,” Farrell said.

Kolodzy said the Distinguished Journalist-in-Residence position is one of two year-long positions within the journalism department. The residencies fill positions left by retired staff, while administrators search for two full-time professors. She said she is excited by the energy these residencies are bringing to campus.

“They are bringing in their approaches to things, and we’re having these great discussions and conversations about journalism today and journalism tomorrow,” Kolodzy said.